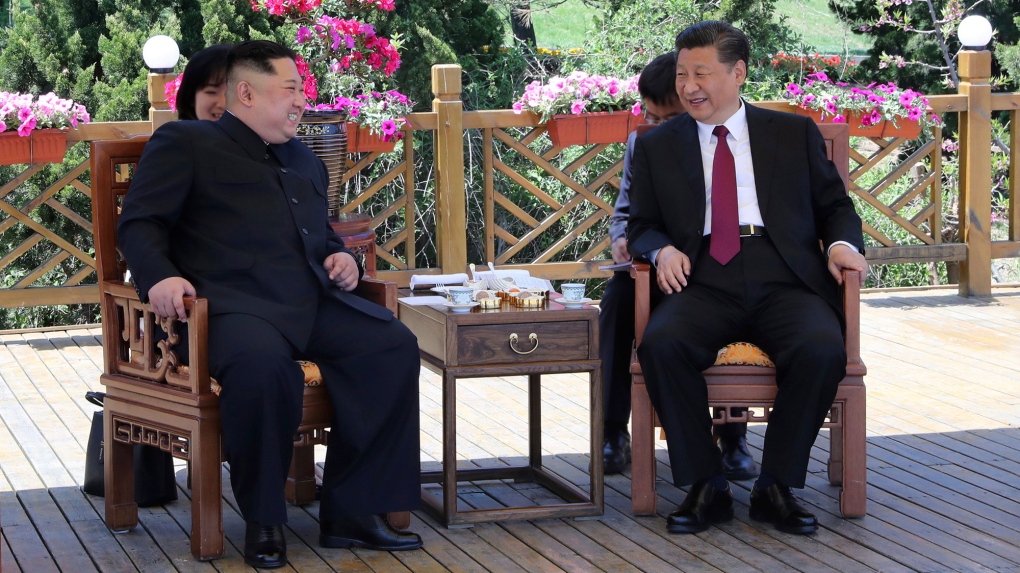 BEIJING -- As North Korea celebrates a major anniversary this weekend, the presence -- or absence -- of Chinese President Xi Jinping could highlight just how much vitality has been restored to ties between Pyongyang and its most powerful backer after a prolonged chill.

A visit by Xi to North Korea for the 70th anniversary of the North's founding on Sunday is expected -- North Korean leader Kim Jong Un has made three trips to China since March this year and has invited Xi to reciprocate -- but neither side has said whether Xi will attend.

China could be keen to demonstrate the strong ties it has with Pyongyang to ensure it remains a key player in efforts to dismantle the North's nuclear program. But the celebrations come as President Donald Trump has blamed Beijing for the slow progress of denuclearization.

Below is a look at issues affecting ties between the allies.

Trump suggests that China has been encouraging North Korea to drag its feet with denuclearization to gain leverage against the U.S. in a trade dispute that has seen both sides levelling tariffs on $50 billion of each other's products. On Wednesday, he tweeted that North Korea "is under tremendous pressure from China because of our major trade disputes with the Chinese government," adding: "This is not helpful!"

China wasn't having any of it. Foreign ministry spokeswoman Hua Chunying said Washington should "engage in self-reflection and stop flip-flopping and blaming others."

"Regarding America's attempts to pass the buck, I'm sorry, we'd rather not accept," Hua told reporters.

China has already distanced itself somewhat from its significant co-operation with the U.S. on North Korea. After supporting tough UN sanctions and scaling back trade with the North after it ramped up nuclear and missile tests last year, Beijing has eased the pressure on its neighbour slightly.

WHAT ARE THE CHANCES OF A XI VISIT?

No Chinese head of state has visited North Korea since President Hu Jintao met with Kim's father, Kim Jong Il, in Pyongyang in 2005, a time when Beijing was urging Pyongyang to reform its economy and take part in six-nation denuclearization talks.

That made Kim's three visits to China this year all the more striking, a sign that the relationship was back on track.

A visit on such a symbolic occasion would underscore the unique historical ties between the two countries' ruling parties. Mao Zedong sent Chinese troops to aid the North after the Korean War began in 1950, setting up a relationship once described as being "as close as lips and teeth."

Xi would also use the opportunity to reassert China's claim to a place at the table when key decisions are made concerning Pyongyang's relationships with both Washington and South Korea, including over a possible formal end to the Korean War. Beijing is determined to ensure its interests are honoured, especially its desire to maintain the viability of Kim's regime and keep U.S. and South Korean forces far from its border.

"By going, Xi would reduce the sense that China is being excluded from any diplomacy going forward," said John Delury, a North Korea expert at Yonsei University in Seoul. "I think Beijing is worried that North Korea will go its own way and work out new relationships with Washington and Seoul and move out of China's orbit."

WHAT IF XI DOESN'T GO?

If Xi were absent from the celebration, it could be a sign that China was displeased with North Korea's lack of progress with denuclearization, analysts said.

It "would be a strong signal" if Xi did not go, said Michael Kovrig, senior adviser for Northeast Asia at the International Crisis Group, indicating that "North Korea has a lot to do to get back in China's good graces."

But China could send a member of the ruling Communist Party's all-powerful Politburo Standing Committee such as Premier Li Keqiang to show that ties were still on track, Kovrig said.

Xi may stay away for more practical reasons as well. With China committed to UN economic sanctions on the North, it may be looking for real signs of progress toward denuclearization before giving up any political capital.

"For China, all actions should serve the interests of denuclearization and a visit by Xi will depend on whether there is an agreement on this," said Guo Rui, a North Korea expert at Jilin University in northeast China.

WHAT'S THE STATE OF RELATIONS?

Kim's visits to Beijing displayed all the customary pomp and circumstance bestowed on his father and grandfather. A separate visit to the northern port of Dalian showed the two leaders strolling along the beach and chatting amid lush gardens -- all apparently intended to imply a warm personal relationship between them.

Diplomats say Beijing continues to implement UN sanctions covering exports of coal, iron ore, seafood and other products. In one area not covered by the sanctions, however, it seems to be cutting Pyongyang some slack: tourism.

Recent visitors to North Korea say numbers of Chinese visitors have exploded in recent months, with busloads turning up at key spots such as the Demilitarized Zone dividing the two Koreas and Mount Paektu that touches the country's border with China.

China is likely advertising the potential benefits of North Korean compliance further down the line.

"China has a strategy of trying to prevent North Korea from straying too far," Delury said. "This relationship is full of mutual distrust, but they keep it within certain bounds."