What’s it like in #Ferguson? Tweets, videos show tension 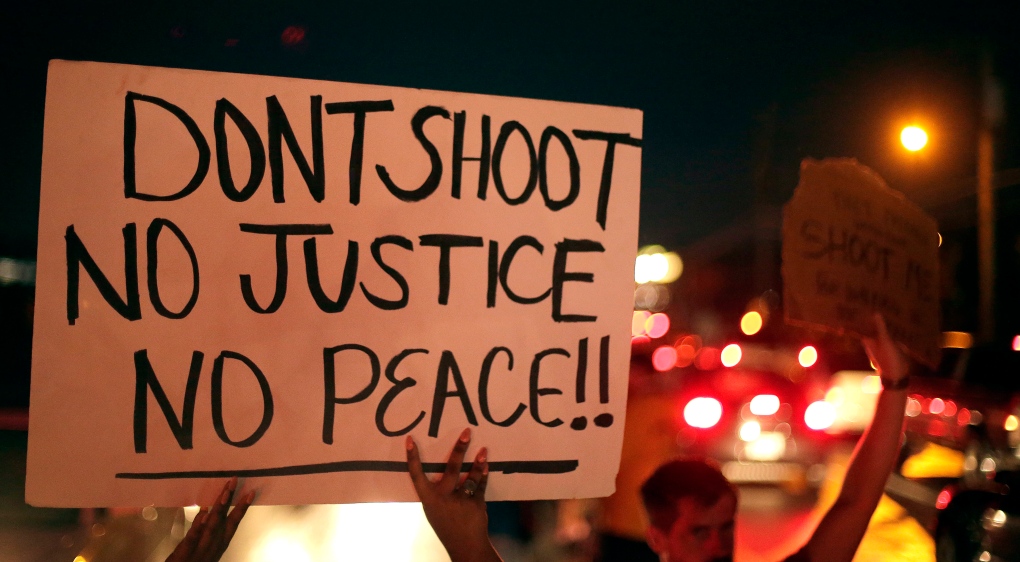 Protesters hold up signs, Friday, Aug. 15, 2014, in front of a convenience store that was looted and burned following the shooting death of teenager Michael Brown by police nearly a week ago in Ferguson, Mo. (AP / Charlie Riedel)

Since the shooting death of Michael Brown by a police officer in Ferguson, Mo., tweets, images and videos have spread quickly on social media, giving a glimpse of what it's like to be on the ground in the St. Louis suburb. Here's a look at some of the social sharing among citizens:

First news of the incident one week agao may have come from a Twitter user who claims to have witnessed and live-tweeted the shooting on Aug. 9.

*Warning: Tweets contain profane language and graphic images. CTV News has not been able to verify the contents of these tweets."

I JUST SAW SOMEONE DIE OMFG

Im about to hyperventilate

The same user tweeted out these two photos.

Police cars trampled the rose petals and candles at the memorial for #MikeBrown. pic.twitter.com/nb2fQSrkMX

Protests soon followed, with residents of Ferguson taking to the streets to demand justice for the slain teen. Antonio French, an alderman from St. Louis, captured photos and videos of some of the protests and posted them to his Twitter account.

Some photos from last night in #Ferguson that I didn't get to post before I was arrested. pic.twitter.com/tww28XeS0m

Late Friday, following a brief period of relative peace after the Missouri Highway Patrol seized control of the security situation in Ferguson, some looters stormed several stores, including the same store Brown is accused of stealing a box of cigars from.

This is the store that Michael Brown was suspected of robbing. It has been looted tonight. #Ferguson https://t.co/zhob30TzuP

However, some residents and store-owners stepped in to protect the shops from the looters. Images of groups of protesters blocking the entrance ways also appeared on social media:

Someone tried to loot a store but the community came together and stopped anyone from taking anything. #Ferguson pic.twitter.com/GyhyEGsNQf

I'm really proud of those who ran to block looters. They tried to redirect back to the chant "Hands up! Don't shoot!" pic.twitter.com/dARQl1xTyx

Store owners in #Ferguson say they're going to start defending themselves against looters. pic.twitter.com/YvP9xFEtA2

In this video, the residents protect a store from looters while chanting "I am Mike Brown!"

And on Saturday morning, photos emerged of residents pitching in to clean up the debris from Friday night's clashes.