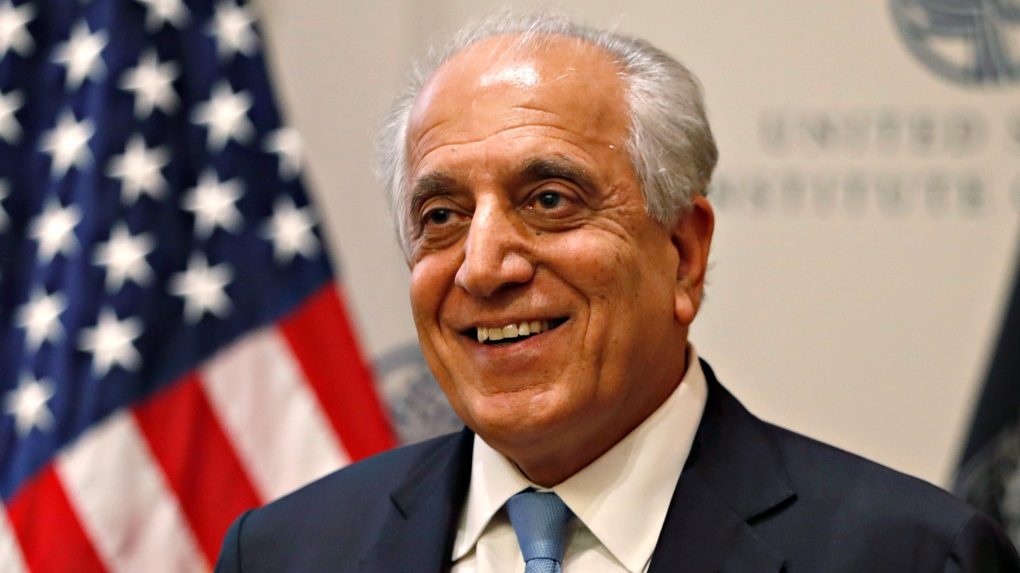 In this Feb. 8, 2019, file photo, Special Representative for Afghanistan Reconciliation Zalmay Khalilzad at the U.S. Institute of Peace, in Washington. Representatives of Russia, China, the United States and Pakistan have agreed that negotiation is the only road to peace in Afghanistan, including an early resumption of direct U.S. talks with the Taliban. (AP Photo/Jacquelyn Martin, File)

ISLAMABAD -- Representatives of Russia, China, the United States and Pakistan agreed Friday that negotiation is the only road to peace in Afghanistan, including an early resumption of direct U.S. talks with the Taliban.

The day-long talks in Moscow came ahead of an intra-Afghan dialogue to be hosted by China. The Beijing talks, which were to be held next week, were postponed, according to officials familiar with the talks. Speaking on condition they not be identified because of the sensitivity of the talks, they said the postponement would be brief but no new date was given.

When the China talks take place, they will be the first face-to-face discussions between Afghanistan's warring sides since July. Even President Ashraf Ghani, who has objected to any talks not led by his government, said late Friday that he would send representatives.

There has been no official announcement of a postponement, but previous intra-Afghan talks have been delayed while both sides squabbled over participants.

Earlier on Friday, a government official, who did not want to be identified because of the sensitivity of the discussions, had said Ghani was opposed to participation in the talks.

It wasn't clear what changed his mind or whether he had requested a postponement, but a number of prominent Afghans from Kabul are expected to attend the China meeting, including former President Hamid Karzai, who has been a strong proponent of direct talks with the Taliban. He participated in earlier sessions of talks with the Taliban held in Moscow.

The Taliban delegation to China will be led by Mullah Abdul Ghani Baradar, co-founder of the movement, who spent eight years in a Pakistani jail after he secretly opened peace talks in 2010 with Karzai, who was president at the time. Baradar was arrested in a joint American CIA and Pakistani anti-terrorism agency operation. Neither Pakistan nor the United States were ready for peace talks with the Taliban in 2010, Karzai previously told The Associated Press.

The Taliban are the strongest they have been since being ousted in 2001 by a U.S.-led coalition holding sway in nearly 50% of the country.

In a statement released at the end of Friday's meeting in Moscow, China, Russia and Pakistan called on Washington to return to the negotiation table with the Taliban and sign an agreement that will set the stage for Afghans on both sides of the protracted conflict to start face-to-face negotiations on what a post-war Afghanistan would look like.

After nearly a year of direct talks, U.S. envoy Zalmay Khalilzad had all but signed a peace deal with the Taliban until President Donald Trump in September declared the talks dead after a series of attacks killed several people, including a U.S. soldier.

It's not clear what it would take for Trump to agree to restart talks, but the U.S. president has insisted he wants American troops out of Afghanistan and an end to American involvement in what has become their longest military engagement.

Trump has vowed at recent rallies to make good on his 2016 campaign promise to end American involvement in what he has described as endless wars, including Afghanistan, generating fears among some observers of a surprise tweet suddenly ordering troops home.

Friday's statement called for a reduction in violence, which some observers say might convince Trump to agree to renewed talks.

The United Nations, however, earlier this month called for all sides to reduce their violent attacks, which have caused more than 8,000 civilian casualties so far this year. The casualties have been caused by all sides in the conflict, including the United States and its stepped-up air attacks.

The 15-point statement called on all sides to prevent terrorist organizations from operating in Afghanistan. Those include al-Qaida, with links to the Taliban and the Islamic State group affiliate in the country, and the East Turkmenistan Islamic Movement of mostly ethnic Uighurs.

The representatives, which have met previously, agreed to meet again.