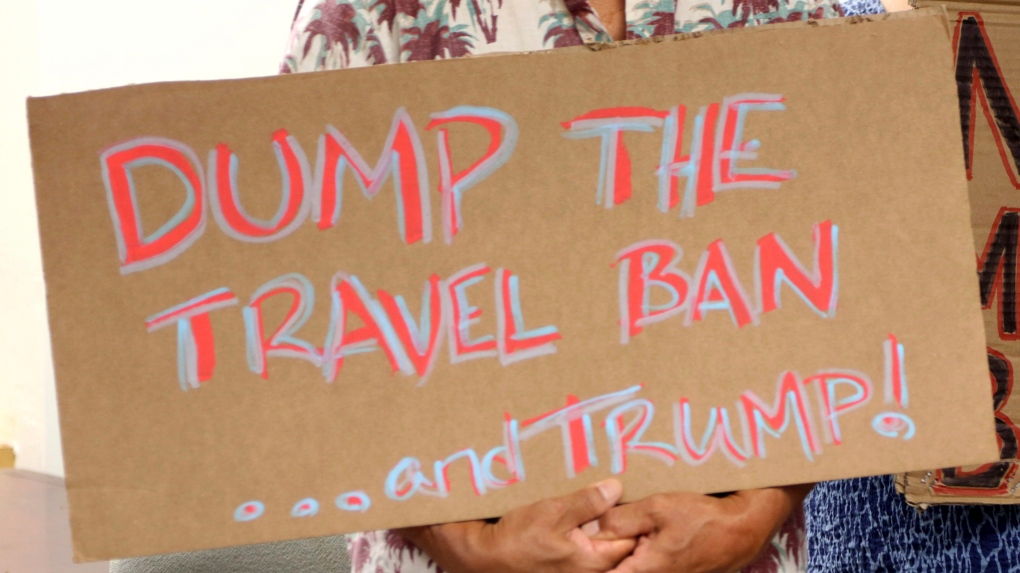 SEATTLE -- For most of the time Syrian refugee Mohammad Al Zayed has been in the United States, judges have been wrestling with the Trump administration's efforts to impose travel restrictions that he says would keep him from seeing relatives who remain overseas.

It's taken an emotional toll -- one that continues this week as two U.S. appeals courts take up the issue yet again.

"It's been 10 months, and we're stuck," Al Zayed, a janitor at O'Hare International Airport in Chicago, said through an Arabic interpreter. "We can't go back. We can't bring our loved ones here."

Citing national security concerns, President Donald Trump announced his initial travel ban on citizens of certain Muslim-majority nations in late January, bringing havoc and protests to airports around the country. A federal judge in Seattle soon halted that ban as discriminatory, and since then, the restrictions have been up to the U.S. Supreme Court and back down to the federal district courts as the administration has rewritten them.

The third and latest version targets about 150 million potential travellers from Chad, Iran, Libya, North Korea, Somalia, Syria and Yemen, along with some Venezuelan government officials and their families.

The administration said the latest ban is based on assessments of each country's security situation and their willingness to share information about travellers. But judges in Hawaii and Maryland blocked it to varying degrees just before it was due to take effect in October. The judges found that the ban appears impermissibly discriminatory, has no legitimate national security purpose and violates U.S. immigration law.

On Wednesday, a three-judge panel of the 9th U.S. Circuit Court of Appeals will hear arguments in Seattle on the government's appeal of the Hawaii judge's ruling. The panel has already narrowed that decision to allow the administration to bar travellers who do not have a "bona fide" relationship with people or organizations already in the U.S. -- an approach that echoed the Maryland judge's ruling as well as an earlier travel ban decision from the U.S. Supreme Court.

A full complement of 13 judges on the 4th U.S. Circuit Court of Appeals is due to hear the government's appeal in the Maryland case on Friday in Richmond, Virginia.

Critics of Trump's travel restrictions insist that they make up the Muslim ban he promised during his campaign, and judges have seized on the president's public statements on Twitter and elsewhere in finding them unconstitutionally discriminatory.

This week's arguments arrive as Trump continues to stoke those anti-Islam sentiments: Just last week, he drew a sharp condemnation from British Prime Minister Theresa May's office when he retweeted a string of inflammatory videos from a fringe British political group purporting to show violence being committed by Muslims.

Government lawyers argue in briefs filed for the Maryland case that Trump's comments "primarily reflect an intent to protect the United States from the threat of terrorism by nationals from countries that pose heightened risks." The Trump administration says the travel policy will be reviewed periodically and the named countries are encouraged to work with the U.S. to address "inadequacies and risks" so that the restrictions "may be relaxed or removed as soon as possible."

"The fact that serious national-security risks are posed by some Muslim-majority nations cannot prevent the government from addressing those problems, especially after the kind of extensive, multi-agency review process that occurred here," the administration argues.

The lower court rulings "threaten the ability of this and future Presidents to address national-security threats and advance foreign policy interests," the Justice Department wrote in its 9th Circuit appeal. Further, the government says, courts don't have the authority to review the president's decision to exclude foreigners abroad unless Congress authorizes them to, and Congress has provided no such authorization.

Al Zayed, 50, arrived in the U.S. via Jordan in September 2016 with his wife, two sons and daughter after fleeing horrific fighting in Syria, which destroyed the textile factory where he worked and prevented his children from attending school. Al Zayed's case is among several laid out in friend-of-the-court briefs filed by labour organizations opposed to the travel ban.

Al Zayed says he's afraid he wouldn't be able to return if he visited family overseas. His two brothers and parents remain in Syria, and he's afraid he'll never see his 85-year-old father again if the travel ban is upheld. Nevertheless, he says he's happy to be here.

"Syria was very difficult -- an impossible life for us," he said. "So despite that they have the Muslim ban, I think, 'Thank God that we are here."'

Critics said that while North Korea and Venezuela are not predominantly Muslim, the ban would affect very few travellers from there, and their inclusion on the list may have been designed to avoid discrimination allegations.

"There are millions of people who are being separated from family members and prevented from doing their important business -- lawful business -- in the United States, all because of the president's rampant and blatant anti-Muslim bias," said Cecillia Wang, an American Civil Liberties Union lawyer who will argue before the 4th Circuit.

It is unclear when the courts will rule. Whatever they decide, the rulings are expected to be appealed to the U.S. Supreme Court.