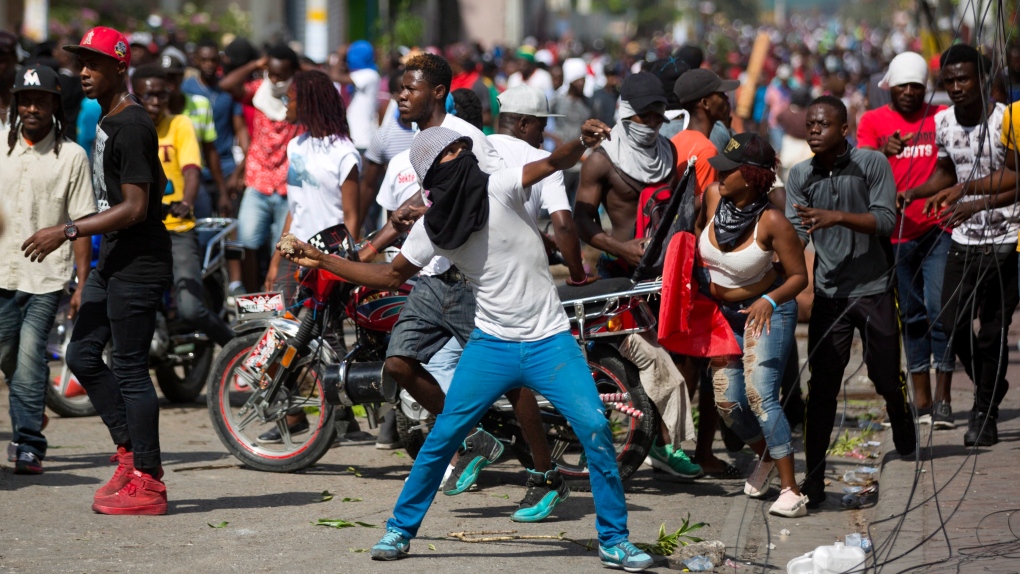 A demonstrator throws rocks at a house during a protest to demand the resignation of President Jovenel Moise and demanding to know how Petro Caribe funds have been used by the current and past administrations, in Port-au-Prince, Haiti, Thursday, Feb. 7, 2019. (AP Photo/Dieu Nalio Chery)

PORT-AU-PRINCE, Haiti -- Thousands of demonstrators took to the streets of Haiti's capital on Thursday to demand the ouster of President Jovenel Moise amid months of protests.

Demonstrators want Moise to resign for not investigating allegations of corruption in the previous government over Petrocaribe, a Venezuelan subsidized energy program.

They pledged to continue demonstrations through the weekend unless the president resigns.

Police spokesman Gary Desrosiers said one person had been killed, apparently in a shooting near a protest, 36 people arrested and four police cars burned.

Protester Valckensy Dessin said he was protesting corruption that enriched a few at the expense of the majority who are poor and hungry.

"It's impossible," he said. "That's one of the main reasons we decided to stand with the people, with the working-class."

The protesters marched, chanted and held banners in the streets of Port-au-Prince saying, "Where is the Petrocaribe money?"

Protesters lit car tires in the middle of the streets while police in riot gear were seen firing tear gas canisters.

Opposition leader Moise Jean Charles said protests will continue in the coming days until Moise resigns, something Haiti's president says he will not do.

"We will not stop, we will continue on the 8th and 9th of February to finish with President Jovenel Moise," the opposition leader said. "If Jovenel Moise does not want to step down from power we are going to name an interim president in the coming days."