Their caliphate in ruins, ISIS militants melt into the desert 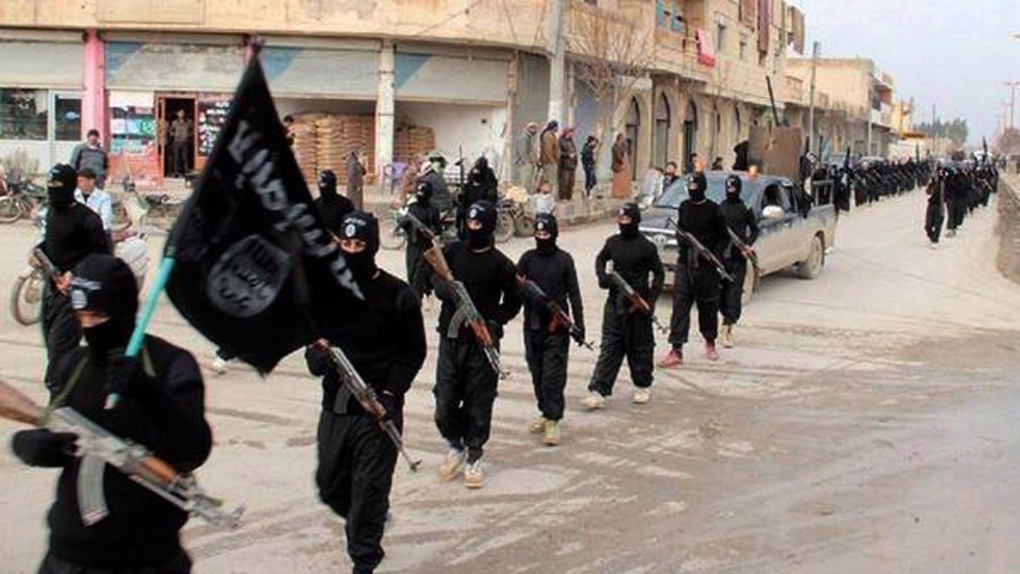 This undated file image posted on a militant website on Jan. 14, 2014, which has been verified and is consistent with other AP reporting, shows fighters from the Islamic State marching in Raqqa, Syria. (Militant Website/AP/The Canadian Press)

BEIRUT — Islamic State militants, routed from one urban stronghold after another in Syria, have recently been moving deeper into Syria’s remote desert, where experts say they are regrouping and preparing their next incarnation.

The Sunni militants’ self-proclaimed “caliphate” with its contiguous stretch of land — linking major cities such as Syria’s Raqqa and Iraq’s Mosul — may have been vanquished, but many agree this territorial defeat will not mark the end of ISIS.

Beyond the urban and inhabited areas lies the vast Syrian Desert, also known as Badiyat al-Sham, famous for its caves and rugged mountains. It encompasses about 500,000 square kilometers across parts of southeastern Syria, northeastern Jordan, northern Saudi Arabia, and western Iraq.

The desolate landscape is a perfect hideout and a second home for many ISIS militants from the days before the birth of their caliphate. Experts estimate that hundreds of thousands of troops would be needed to mount search operations — and even more to put the desert under permanent control.

Once they melt into the desert, without an army of tens of thousands of supporters from dozens of countries, ISIS jihadis will resort to guerrilla-style attacks: scattered hit-and-run attacks and suicide bombings.

“They love fighting battles in the desert and they will go back to the old ways,” said Omar Abu Laila, a Europe-based opposition activist originally from Syria’s eastern province of Deir el-Zour, which lies in the heart of Badiyat al-Sham.

ISIS leaders appear to have made contingency plans that involve precisely this — regrouping in the desert and launching attacks, much like ISIS’ predecessor, al-Qaida in Iraq, did for more than a decade after the U.S.-led 2003 invasion.

Some of those plans are already on display. In the eastern Syrian town of Mayadeen, a former ISIS stronghold, the militants pulled back and disappeared into the desert after only a few days of battle with Syrian government forces earlier this month.

The top U.S. envoy for the anti-ISIS coalition, Brett McGurk, said the Sunni militant group is now down to the last 10 percent of the territory it once held in Iraq and Syria.

The group still maintains some appeal for Sunnis, who complain of discrimination by Iraq’s Shiite-led government and by Syrian President Bashar Assad’s minority Alawite sect, an offshoot of Shiite Islam.

ISIS will also look to buy time and benefit from political and other conflicts — such as this month’s clashes between Iraqi and Kurdish forces following the Kurdish independence referendum. That fighting has already diverted resources from the war on ISIS, the top U.S. general in Iraq, Lt. Gen. Paul Funk, told The Associated Press last week.

Iraqi troops, Shiite militiamen and Kurdish forces have driven ISIS from nearly all of Iraq, but if they turn on one another, that could give the extremists an opening to regroup.

A similar dynamic threatens recent gains in Syria. The U.S.-backed Syrian Democratic Forces and Russia-backed government troops have been the most effective in the fight against ISIS, but are now waging parallel offensives in Deir el-Zour that could bring them into conflict with one another.

Gen. Joseph Dunford, chairman of the U.S. Joint Chiefs of Staff, called the SDF’s liberation of Raqqa an “inflection point” in the fight against ISIS, but warned that the coalition needs to stay focused.

“ISIS is on their heels right now and our job is to make sure they don’t recover,” Dunford said, using an alternative name for the group.

Experts say that will be difficult.

“The lone wolf has nothing to lose. They have nothing to defend now,” Jalal said.

The group’s predecessor, al-Qaida in Iraq, was almost crushed in 2007 by U.S. and Iraqi forces. But after the Americans withdrew from Iraq in 2011, the militants regrouped, eventually emerging stronger than ever in the summer of 2014, when they conquered large areas of Syria and Iraq.

ISIS will again “find a supporting base in Sunni Iraq,” where discontent with the Shiite-led government runs high, said Mutlu Civiroglu, a Washington-based Kurdish affairs analyst who follows the battle against ISIS.

After losing ground in Syria and Iraq, ISIS will try to increase its presence in Libya, Yemen, Afghanistan, North Africa and elsewhere. The fact that ISIS “carried out or inspired attacks in around 30 countries worldwide shows its global reach,” he said.

The group is also increasingly reverting to its weapon of choice: suicide attacks.

A suicide attack killed nearly 20 people at a Damascus police station earlier this month. In late September, ISIS gunmen emerged from the desert and hit government forces in central Syria, cutting their supply lines for days. ISIS has also carried out deadly attacks in the Iraqi capital, Baghdad, and in western Iraq’s sprawling Anbar province.