Syria and the 'Red Line': Why there's no foreign intervention, yet

So should the world be bracing for a U.S. or UN-led military mission into Syria?

Not just yet, said Cindy Vestergaard of the U.S. Center for Strategy and International Studies.

"The French and the British have said they have evidence, but the international community itself needs to be able to satisfy itself that these are independent, and needs to be actually comfortable in the sense that the evidence proves this beyond a doubt," Vestergaard told CTV's Canada AM. "And the next question is who actually used them?"

The U.S. and Israel have also both said in recent months they believe chemical weapons have been used in Syria, but neither have suggested military intervention is imminent.

While France said Tuesday it has confirmed the nerve gas sarin was used "multiple times and in a localized way" in Syria, it is believed that most of the proof was obtained from outside the country since inspectors have not been allowed into the war-torn nation.

French Foreign Minister Laurent Fabius said at least one of the incidents involving sarin gas use was carried out by forces loyal to the regime of President Bashar Assad.

Britain’s Foreign Office also said Tuesday that government lab tests on samples from Syria came back positive for sarin, and a United Nations team said it had "reasonable grounds" to suspect chemical weapons were used in at least four attacks in March and April.

Sarin is an odourless nerve agent that can be used as a gas or a liquid, poisoning people when they breathe it, absorb it through their skin or eyes, or take it in through food or water.

But while the latest statements suggest that the line has been crossed, Vestergaard said the stakes are too high for the U.S. or UN to take a military role in Syria without undisputable proof that atrocities have been committed by one side.

She suggested both the UN and Obama will wait for more definitive proof before taking action.

"It's a red line, but let's say it's a very thick red line, and crossing that line certainly is something that needs to be thought of very carefully, in the sense we're talking about the Middle East -- a very politically and militarily sensitive environment that is very chaotic at the moment," she said.

Ferry De Kerckhove, of the Canadian Defence and Foreign Affairs Institute, agreed evidence is mounting in terms of chemical weapons use in Syria, but he said it is still "circumstantial."

More definitive evidence will be needed before action is taken, he agreed. And that will likely prove difficult to obtain, since Syria has closed its borders to international monitors or UN representatives. And even if inspectors could get on the ground, it would be difficult to obtain evidence in the midst of a brutal conflict between rebels and government troops.

"I find it remarkable the French have been able to build that kind of evidence but again this is circumstantial in terms of who, where and how it was done," De Kerckhove said. "We're in a very early stage of the actual analysis before any action is contemplated and then we'll have to see what kind of action is going to be initiated."

Obama's "red line" comment was just vague enough that the U.S. won't feel forced to act on Syria any time soon, he said.

"The level of atrocity on both sides is such that the chemical weapon is a kind of fleeting red line which no one will want to interpret as a call to action in the early days," De Kerckhove said.

He added: "There are so many unknowns out there I think it's going to be quite a while before real action in response to clear evidence of chemical weapons will be initiated."

De Kerckhove called the situation a "powder keg" and agreed with Vestergaard that ongoing tensions between nearby Iran and the West are adding to everyone's reservations about getting involved in Syria.

Such a move would siphon valuable military assets into Syria at a time when Iran has threatened Israel and claims to be on the cusp of developing nuclear weapons -- a benchmark that Israel has set as its own "red line" in terms of possible military action against Tehran. 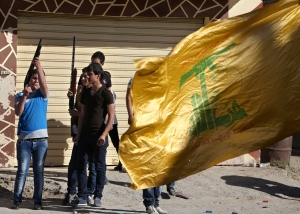