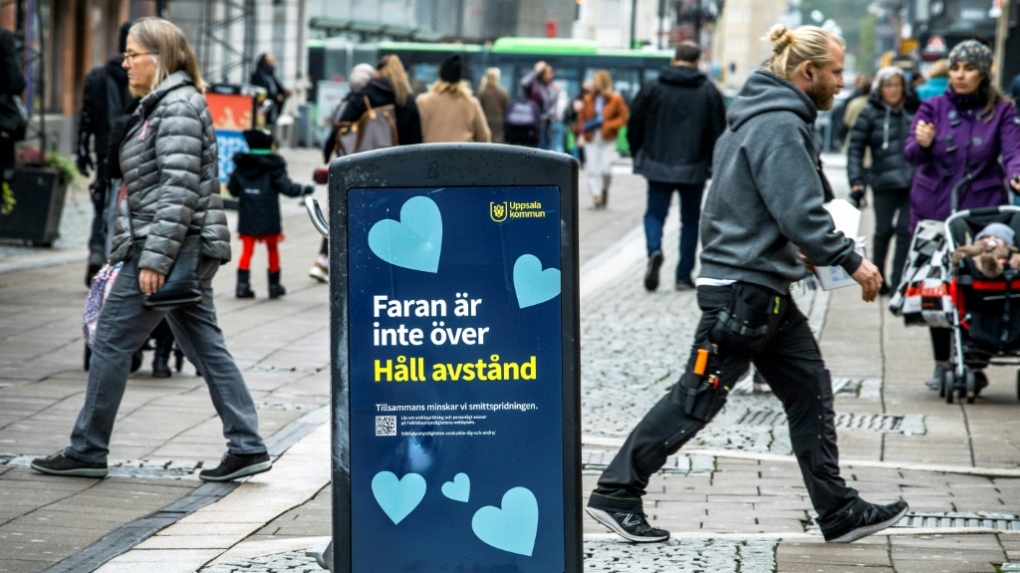 People walk past a trash can with a sign reading "The danger is not over - Keep your distance" in the Swedish city of Uppsala. (AFP)

STOCKHOLM, SWEDEN -- Sweden is seeing an uptick in coronavirus infections and introducing targeted measures, but the country that famously refused to lock down is sticking to its guns and insisting coercive methods are not the way to go.

After two months of declining cases in July and August, Sweden has seen infections rise steadily since mid-September.

But while many European countries are again introducing draconian measures like partial lockdowns or curfews to curb the spread of the virus, Sweden -- which has recorded 5,930 COVID-related deaths, one of Europe's highest per capita death tolls -- is just adjusting its softer approach with targeted tweaks.

This week, it announced stricter local guidelines in Uppsala, a university town 70 kilometres (45 miles) north of Stockholm that has seen a spike in cases since students returned in the autumn.

Among other things, locals have been advised to avoid public transport and in-person contact with people outside their own household until November 3.

"People can only hold out with such strict guidelines for a limited period and the timing is important. You can't start too early and you can't wait too long. ... We hope this is a good time," state epidemiologist Anders Tegnell said.

On Thursday the country also introduced restrictions on nightclubs, with Prime Minister Stefan Lofven admonishing Swedes "that the party is over now in nightclubs, and it needs to stay that way for as long as necessary."

Yet Sweden remains one of the only countries in the world that still does not recommend face masks, arguing they provide a false sense of security that undermines social distancing efforts.

In the capital Stockholm, daily life appears to carry on almost as normal, as locals stroll through the city bundled up against the chilly autumn weather and stopping in at cafes, restaurants and shops that have remained open throughout the pandemic.

And while images in the media occasionally show crowded city buses and restaurants, surveys by the Swedish Civil Contingencies Agency found that 80 percent of Swedes have changed their behaviour as a result of recommendations.

They are working from home or limiting social contacts -- even though there are no fines or sanctions for disregarding them.

In the Sodermalm neighbourhood of Stockholm, where mostly unmasked cyclists and pedestrians hurried to work during the morning rush hour, Roger Palmqvist told AFP he trusted the Swedish approach.

But he acknowledged the lighter Swedish touch would probably not work everywhere.

"There's nothing that forces you, but Swedes are like that you know, they follow (rules)," said the 60-year-old sea captain, noting that cultures were different in other parts of Europe.

On Thursday, the government also lifted its special recommendation in place since April for people over the age of 70 and risk groups to shield themselves.

There were concerns the measure was isolating them too much and leading to other public health issues like depression and loneliness.

Those groups had been urged to avoid shops, public transport and any place where groups of people gather.

Earlier this month, the government also lifted its ban on visits to nursing homes -- one of the rare restrictions introduced during the pandemic.

Public gatherings of more than 50 people have been prohibited since late March, but the government said Thursday cultural and sporting events could now accomodate 300 people as long as they were seated respecting social distancing.

While polls show a majority of Swedes support the country's approach, the strategy has had its detractors, both abroad and domestically.

Some accused Sweden of playing Russian roulette with citizens' lives early on in the pandemic, as its death toll surged far past those in neighbouring countries which adopted stricter measures.

And angry debate has recently surged in the media over Sweden's policy of treating most elderly COVID-19 patients with palliative care, deeming them too weak for intensive care.

More than half of its COVID-19 deaths have occurred in elderly care homes.

Authorities have meanwhile repeatedly stressed that Sweden's overall strategy has been chosen to cope with a "marathon, not a sprint."

Johan Carlson, director of Sweden's Public Health Agency, said he believed Europe had shown that shutdowns and reopenings were "not the way forward."

"Our philosophy is to create a situation where you can live your life in a reasonably normal way given the restrictions that are in place," Carlson said, adding that any approach needed widespread acceptance and adherence.