Pope Benedict XVI tells final audience, 'I will not abandon the cross'

In his final public address as the leader of the Catholic Church, Pope Benedict XVI said he's been 'touched' by the outpouring of support and love since he shocked the world with his surprise announcement he would be the first pontiff in six centuries to retire. And looking ahead, he promised not to abandon the cross.

In front of a massive crowd gathered to bid the pontiff farewell, Benedict stressed that he was not abandoning the church and his decision to retire was not an easy one.

"To love the church means also to have the courage to take difficult, painful decisions, always keeping the good of the church in mind, not oneself," Benedict, 85, told the tens of thousands of people jammed into St. Peter’s Square to witness the rare, historic event.

The pope's remarks come as part of his final general audience, a weekly ritual when he is in Rome that gives the public a chance to see the head of the Catholic Church and receive a blessing. While the general audience typically gathers to hear Benedict’s teachings, this morning the outgoing pontiff made his final public appearance in the Square a personal one.

He explained once again why he made the “difficult” decision to retire, becoming the first Pope to do so in 600 years.

Under Rome’s bright, sunny skies, Benedict recalled the joys and hardships of his papacy but stressed that he never felt alone.

Here's our live updates of events as they unfolded on Wednesday:

The sun is shining on a patient, excited crowd estimated waving flags, banners and signs, many of which are marked "Grazie" or thank-you. The Vatican said 50,000 tickets had been requested for the event, although estimates pegged the crowd at more than double that number.

Pope Benedict arrives in the popemobile, waving to the sea of people in St. Peter's Square. The crowd looks jubilant, cheering, taking photos and videos.

Benedict continues his lap around the square, flanked by security. He is expected to concentrate on his writing in retirement.

The popemobile stops for a moment, for Benedict to greet a young child.

On Canada AM's live coverage, papal commentators say there will be difficulties with two popes in Rome, "within shouting distance of one another," it will be a "delicate balancing act."

Another two babies are lifted up to the popemobile for a blessing. Their parents are close by with cameras in hand.

Benedict exits the popemobile and walks to a nearby stage. The crowd has gone silent, as the pontiff prepares to deliver his blessing.

In his first words of the day, with an organ playing in the background, Benedict reads from a letter of St. Paul. The crowd is now estimated at close to 200,000.

Benedict takes a seat on the stage for a reading from the letter of St. Paul's to the Colossians. There will be readings in a number of different languages for the diverse audience. Passages have already been read in Arabic and Portuguese. We've also heard English, Italian, Spanish and German.

One commentator asks: would it be too controversial for a woman to take one of the readings?

"Thank you for coming today in such great numbers," he says, as the crowd cheers. "I am moved to see the church in this way," he adds before thanking God for the "beautiful weather" in Rome, where heavy rain had been forecast, but never materialized.

In his remarks, he says he feels great things for the growth of the church and wishes to embrace the entire church in the whole world.

"At this moment there is great faith, we all know it about the truth of the word of the Gospel."

Says his friendship with the cardinals has been "precious" and thanks those in his owns diocese of Rome.

Benedict says in his retirement he will not go back to a normal life of "meeting with friends." Instead, he says he will not "abandon the cross."

"I dedicated everything for the church and I gave full service to the church and right now at this moment, life is like a gift. There are many who have great affection for me as a follower of St. Peter…brothers and sisters, I know I am in the embrace of your community."

The chants of "Benedetto!" erupt from the crowd every so often.

Benedict receives a standing ovation after his 18-minute address. Some cardinals are in tears as the applause continues for more than a minute.

Benedict has said he decided to retire after realizing that, at 85, he simply didn't have the "strength of mind or body" to carry on. He will meet Thursday morning with cardinals for a final time, then fly by helicopter to the papal residence at Castel Gandolfo south of Rome.

As a sign of respect for the outgoing pope, Cardinals are expected to wait until Monday before beginning meetings to decide on the next conclave.

The 115 cardinals who have travelled to Rome must unanimously decide on the conclave and the Vatican has stressed the importance of having a pope in place before Easter.

On Tuesday the Vatican announced that, after his resignation, Pope Benedict XVI will be known as either "Your Holiness Benedict XVI" or "emeritus pope." 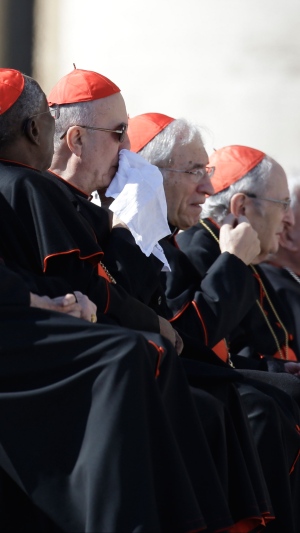