More than 10,000 ISIS fighters have been killed in airstrikes: U.S. official 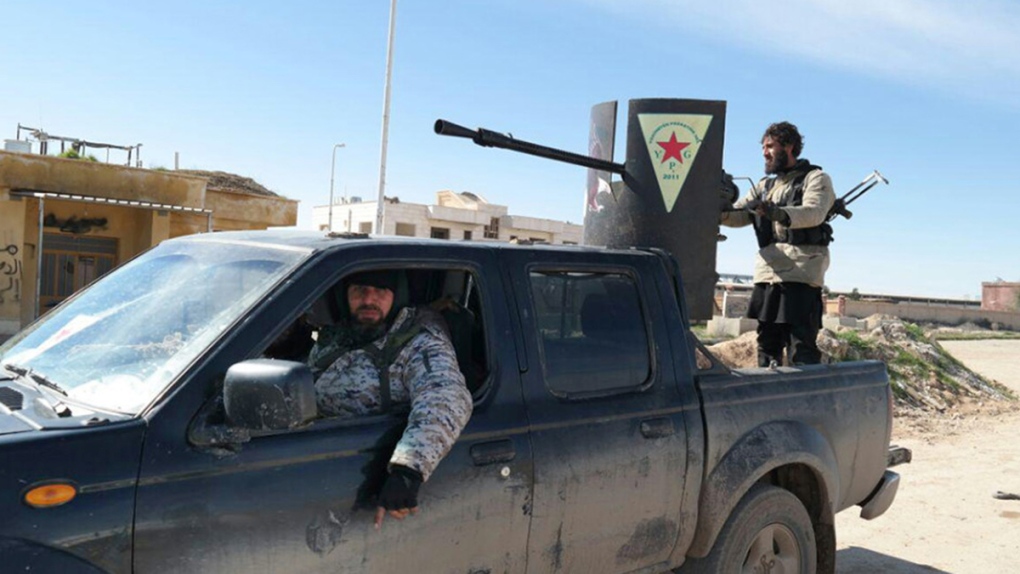 In this image posted on a militant social media account by the Al-Baraka division of the Islamic State group on Tuesday, Feb. 24, 2015, Islamic State militants ride in a Kurdish popular protection unit (YPG) vehicle captured during fighting in Tal Tamr, Hassakeh province, Syria.

BEIRUT -- A U.S. official said Wednesday that more than 10,000 Islamic State fighters have been killed by American-led airstrikes in Iraq and Syria in nine months, offering a first body count for a campaign that has yet to blunt their advance.

Deputy Secretary of State Tony Blinken's figure came after a Paris conference on how to stop the extremists ended without any new strategy to halt their campaign. It also comes months after the Pentagon dismissed such counts as "simply not a relevant figure" in the fight against the Islamic State group.

Meanwhile, the Islamic State group launched a major attack on the predominantly Kurdish city of Hassakeh in northeastern Syria, according to activists and Syrian state media.

Speaking Wednesday to France Inter Radio a day after the Paris conference, Blinken said the airstrikes have been effective.

"We have seen enormous losses for Daesh," Blinken said, using an Arabic acronym for the group. "More than 10,000 since the beginning of this campaign. That will end up having an effect."

In September, the CIA said that Islamic State group has up to 31,500 fighters, meaning that could represent a loss of a third of its forces. Despite that, the extremists continue to attract more recruits from around the world who come to fight with the group to expand its self-declared caliphate in Syria and Iraq.

It's not clear why Blinken offered the figure, as the U.S. military in conflicts since the Vietnam War has been either hesitant or discounted such figures as indicators of success. Adm. John Kirby, a Pentagon spokesman, declined to offer them in January when asked by a reporter.

"The less of these guys that are out there, certainly that's the better, but the goal is to degrade and destroy their capabilities," Kirby said at the time. He added: "It's simply not a relevant figure."

Meanwhile Wednesday, the Islamic State group targeted Hassakeh in an apparent attempt to reverse some of the advances made recently by Kurdish fighters in the northeastern Syrian province. Kurdish fighters have captured dozens of towns and villages there with the help of U.S.-led airstrikes and are getting close to Tel Abyad, a major Islamic State-held border town near Turkey.

The extremists launched the push on the city of Hassakeh, which is split between government forces and Kurdish defenders, on Tuesday night.

Syrian state television said extremists are battling for control of a juvenile prison still under construction on Hassakeh's southern edge and have so far attacked it with five suicide car bombs.

The Britain-based Syrian Observatory for Human Rights said the Syrian air force is also taking part in the battle around Hassakeh and that Islamic State gunmen have entered the prison building. The group said dozens of fighters were killed on both sides, adding that IS brought reinforcements of about 400 fighters from the nearby province of Deir el-Zour.

Activists also reported intense fighting Wednesday in the northern Aleppo province between Islamic State fighters and other insurgent groups including al-Qaida's branch in Syria, the Nusra Front. The Islamic State group has been on the offensive in the area where they captured several towns and villages over the past days.

Also Wednesday, nine prominent jihadi ideologues issued a fatwa, or religious edict, in which they called on Muslim militants to fight the Islamic State group because they have attacked insurgents.

"As the nation of Islam was waiting for more conquests by the holy warriors, the Baghdadis were stabbing the holy warriors in the back," read the Fatwa that was posted on several jihadi accounts on social media, referring to Islamic State leader Abu Bakr al-Baghdadi. "They stopped the holy warriors' march against the regime."

The fatwa that was signed by religious figures including Jordan's top pro-al-Qaida ideologues Abu Qatada and Abu Mohammed al-Maqdisi, as well as Abdullah al-Mheisny of Saudi Arabia who is now in Syria with the Nusra Front.

In the Qatari capital of Doha, U.S. envoy John Allen said Iraq's so-called Popular Mobilization Forces -- which include Iranian-backed Shiite militias -- have a role to play in helping take back territory from Islamic State militants in the Sunni-dominated Anbar province, but that they must fall under Baghdad's control.

Speaking at the U.S.-Islamic World Forum, Allen said leaders in Anbar "do not view these forces through strictly a sectarian prism" and understand they do not only include Shiite hard-liners.

"But we also remain very attentive to and concerned about extremist militia elements frequently influenced and led by the Iranian leadership," he continued. "It is critical that all forces in the battle space fall under the command and control of the government of Iraq."

The role of the militias is contentious among many Sunnis in Iraq, who fear they could enhance Shiite powerhouse Iran's influence in the country and exacerbate sectarian tensions.

Allen, a retired Marine Corps general, is President Barack Obama's envoy for the global coalition against the extremist group.