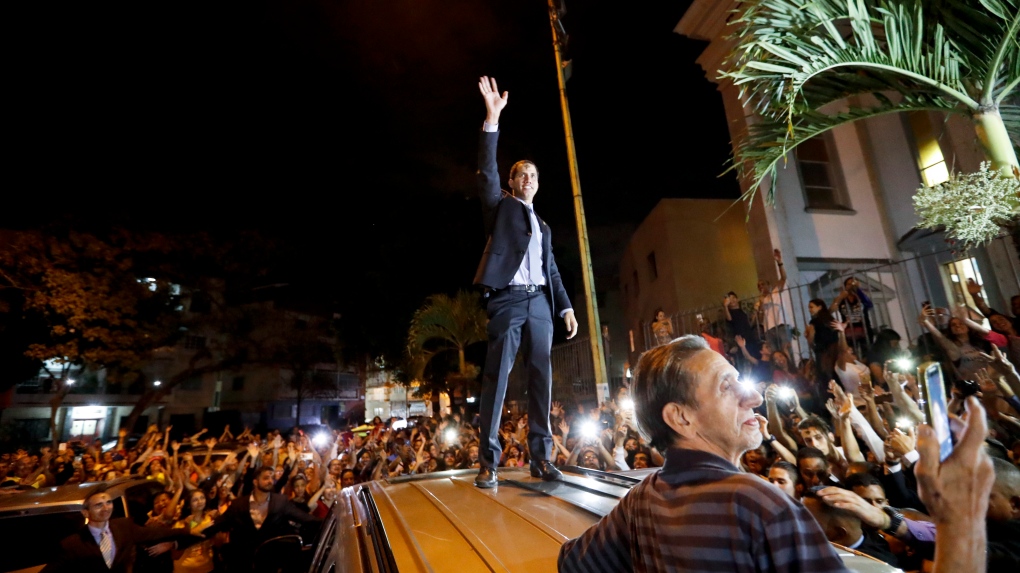 CARACAS, Venezuela -- Venezuela's worst power and communications outage on Friday deepened a sense of isolation and decay, endangering hospital patients, forcing schools and businesses to close and cutting people off from their families, friends and the outside world.

While electricity returned to some parts of Caracas nearly 24 hours after lights, phones and the internet stopped working, several other populous cities remained in the dark as evening approached.

"I'm desperate," said Maria Isabel Garcia, a 39-year-old office worker who hadn't been able to buy food for her three young children because she wasn't able to take money out of the bank on Thursday.

The blackout marked another harsh blow to a country paralyzed by turmoil as the power struggle between Venezuelan President Nicolas Maduro and opposition leader Juan Guaido stretches into its second month and economic hardship grows.

Venezuelans have grown begrudgingly accustomed to power cuts, but nothing like the one that hit during rush hour Thursday evening, sending thousands of people on long nighttime treks in the dark to their homes. It reached virtually every part of the oil-rich country of 31 million, which was once Latin America' wealthiest but is now beset by shortages and hyperinflation projected by the International Monetary Fund to reach a staggering 10 million per cent this year, compelling about one-tenth of its population to flee in recent years.

Venezuelans struggling to put food on the table worried that the few items in their fridges would spoil. One hospital advocate reported there were at least two confirmed deaths due to the outage: A baby in a neonatal unit and a patient at the children's hospital. Venezuelans with chronic conditions liked diabetes searched for ice to preserve their limited supplies of medicines.

The blackout promptly became a point of dispute between Maduro, who blamed sabotage engineered by the "imperialist United States," and U.S.-backed opposition leader Juan Guaido, who said state corruption and mismanagement that have left the electrical grid in shambles were the cause. Guaido, the leader of Venezuela's National Assembly, returned from a Latin American tour to Venezuela on Monday in order to escalate his campaign to topple Maduro and hold elections and called for new protests on Saturday.

Many of the more than 3.4 million Venezuelans who have fled thus far left with valuable skills-- including energy expertise -- and the government's allegations of a saboteurs' plot was met with skepticism by many in Caracas.

"They always say the same thing," said Carlos Ramos, an economist who was waiting to see a doctor outside the darkened lobby of a Caracas hospital.

Elsewhere in the city, Dr. Luz Ardila Suarez, a gynecologist, said many staffers at the hospital where she works were still on the job Friday morning because they couldn't get home the previous night. Like other hospitals, she said the facility was relying on generators but only had enough fuel for another day or two and that she was especially worried about patients in intensive care.

"There are patients who are connected to machines," Suarez said. "And of course, there's no water."

Dr. Julio Castro, one of the leaders of the non-profit Doctors for Health, reported on Twitter that about half of 23 hospitals surveyed were grappling with failing generators.

Another health advocacy group, CODEVIDA, reported that thousands of dialysis patients were going without treatment as a result of the outage. Advocates were particularly concerned about patients who rely on respirators and the lack of air conditioning in several hospitals, which is needed to keep facilities cool in order to prevent the spread of bacteria.

By early Friday afternoon, residents and pro-government state broadcaster VTV reported that power was returning to parts of Caracas. Traffic lights in several neighbourhoods were back on, while at one office building the electricity flickered to life and then turned off.

Venezuela's economic woes are likely to increase as U.S. sanctions against its oil industry take their toll, part of an international effort to push Maduro from power. The United States and about 50 other countries back Guaido's contention that he is the interim president of Venezuela, and that Maduro's re-election last year was illegitimate because major opposition leaders were barred from running.

Guaido and Maduro, whose chief backers are Russia and Cuba, planned rival demonstrations as they seek to energize supporters.

"The electricity war declared and directed by the imperialist United States against our people will be overcome!" Maduro wrote on Twitter.

The state-owned electricity operator blamed the outage on an act of "sabotage" at the Guri Dam, one of the world's largest hydroelectric stations and the cornerstone of Venezuela's electrical grid. Information Minister Jorge Rodriguez described it as a cyberattack on the dam's operating system which signals to machines whether to boost or diminish power based on capacity and demand.

"By attacking the automated control system, the machines stop as a protective mechanism," he said.

U.S. Secretary of State Mike Pompeo said only Maduro was to blame.

"Maduro's policies bring nothing but darkness," Pompeo wrote on social media. "No food. No medicine. Now, no power. Next, no Maduro."

The government keeps home power bills exceptionally low -- just a couple dollars a month -- relying heavily on subsidies from the Maduro administration, which is under increasing financial duress.

Venezuela's normally hyper-active social media was muted during the blackout. Those who managed to get a signal used the hashtag .SinLuz -- without light in English -- to share images of cities resembling ghost towns.

One user posted a video of a nurse manually pumping air into the lungs of an infant. Others posted photos of long lines of cars at gas stations in hopes of getting fuel. A man anguished that he'd gone 17 hours without hearing from his mother.

Netblocks, a non-government group based in Europe that monitors internet censorship, said online connectivity data indicates the outage is the largest on recent record in Latin America.

As the blackout wore on, the patience of many Venezuelans was wearing thin. On both Thursday and Friday evening, residents in still darkened neighbourhoods banged pots and pans in protest. Business owners griped over losses certain to compound an already bleak economic outlook.

"I can't work. I can't do anything," said Veronica Padrino, a lawyer who attended a women's day rally in Caracas. "I can't communicate with my family."

Associated Press writers Jorge Rueda in Caracas, and Christine Armario and Joshua Goodman in Bogota, Colombia, contributed to this report.