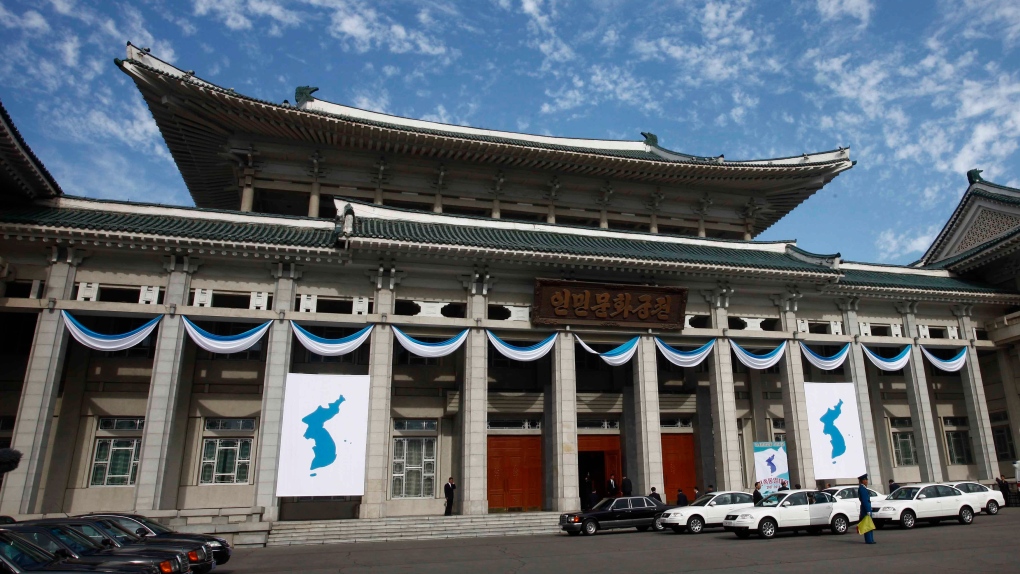 Unification flags are displayed at the People's Palace of Culture in Pyongyang, North Korea Friday, Oct. 5, 2018. A South Korean government delegation is in North Korea for a joint celebration of the anniversary of a 2007 summit and to possibly hold further peace talks. (AP Photo/Cha Song Ho)

SEOUL, Korea, Republic Of -- The Koreas held a high-level meeting in North Korea's capital on Friday to discuss the implementation of agreements from a summit last month between North Korean leader Kim Jong Un and South Korean President Moon Jae-in.

The South Korean delegation arrived in Pyongyang on Thursday for peace talks and to celebrate the anniversary of a 2007 summit between the Koreas. Ri, who in the past has been described by South Korean counterparts as hot tempered, expressed irritation after Cho arrived a few minutes late for the meeting.

"You had the chairman of the Committee for the Peaceful Reunification of the Country waiting in the hallway like he has nothing to do," Ri said, loudly, when Cho arrived, according to pool reports. Cho laughed and blamed a wristwatch that was set 30 minutes late.

During their most recent summit in Pyongyang last month Kim and Moon said they agreed to reduce the conventional military threat between them and hold another summit in Seoul, possibly within the year. North Korea also said it might dismantle its main Nyongbyon nuclear complex if the United States takes unspecified corresponding measures.

Friday's meeting came as U.S. Secretary of State Mike Pompeo prepares to make his fourth visit to Pyongyang on Sunday with the aim of setting up a second summit between Kim and President Donald Trump.

The South Koreans took part earlier Friday in a joint celebration marking the anniversary of the 2007 summit, where the participants issued a statement that included a vague call for a denuclearized Korean Peninsula and urged more cross-border exchanges and co-operation between the rivals.

The Koreas in past months have held a flurry of talks, including three summits, amid a global diplomatic push to resolve the nuclear standoff with North Korea. The North has also used its diplomacy with Seoul to get to Washington, resulting in a June summit between Kim and Trump in Singapore.

The Trump-Kim summit produced an aspirational statement on a nuclear-free Korean Peninsula without describing when and how it would occur. North Korea has been playing hard ball since then, accusing the United States of making "unilateral and gangster-like" demands on denuclearization and insisting that sanctions should be lifted before any progress in nuclear talks occurs.

This has left Seoul scrambling to keep alive a positive atmosphere for dialogue and lobbying for another meeting between Trump and Kim.

Pompeo said Wednesday he's optimistic he'll come away with a plan for a second summit between Trump and Kim and progress on a "pathway for denuclearization." However, he distanced himself from an earlier stated goal of getting North Korea to abandon its nuclear weapons by the end of Trump's four-year term in January 2021.