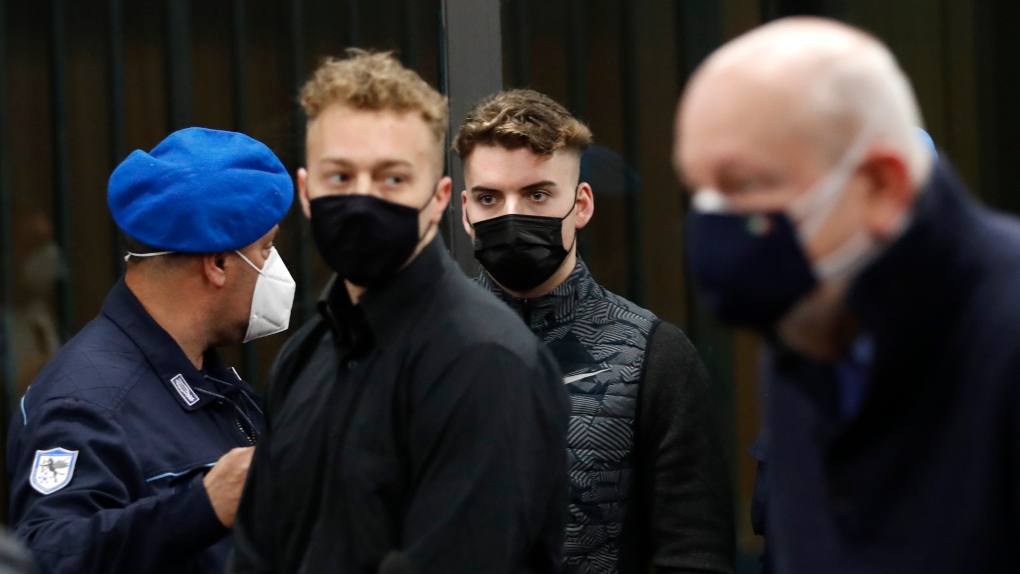 Gabriel Natale-Hjorth, right, and Finnegan Lee Elder, both from the United States, arrive for a hearing in the trial where they are accused of slaying the Carabinieri paramilitary police officer Mario Cerciello Rega, while on vacation in Italy in July 2019, in Rome, Saturday, March 6, 2021.(AP Photo/Alessandra Tarantino, Pool)

The defence is scheduled to make its closing arguments beginning March 18, before the court decides the verdict and sentence.

A lawyer for Elder said he was not surprised the prosecutor requested life sentences.

"Unfortunately, we didn't expect anything different, given the anomalies we have seen in the course of this investigation directed at portraying facts in a different way from the way they evolved," defence lawyer Renato Borzone said.

The two Americans were on vacation in Rome when they were confronted by a pair of plainclothes Carabinieri officers at what the vacationers believed was going to be a meeting with the go-between in a cocaine deal that had gone bad.

Elder has claimed self-defence, testifying this month that he stabbed the victim because he feared he was being strangled by a thug.

Cerciello Rega, 35, and his partner had been assigned to respond to what prosecutors allege was a small-scale extortion attempt by the Americans, after the friends had paid for cocaine that they did not receive. In reprisal, the Americans snatched the go-between's knapsack with his phone inside and set up a rendezvous to exchange it for the 80 euros ($96) they had lost in the bad drug deal.

Cerciello Rega's partner, Andrea Varriale, testified that he tried to stop blood pouring out like a "fountain" from his partner. The slain officer, who was unarmed, was stabbed 11 times.

Varriale has also testified that he heard his partner cry out "Carabinieri!" as Elder and Cerciello Rega struggled in the street.

But Elder told the court he heard no such cry of identification.