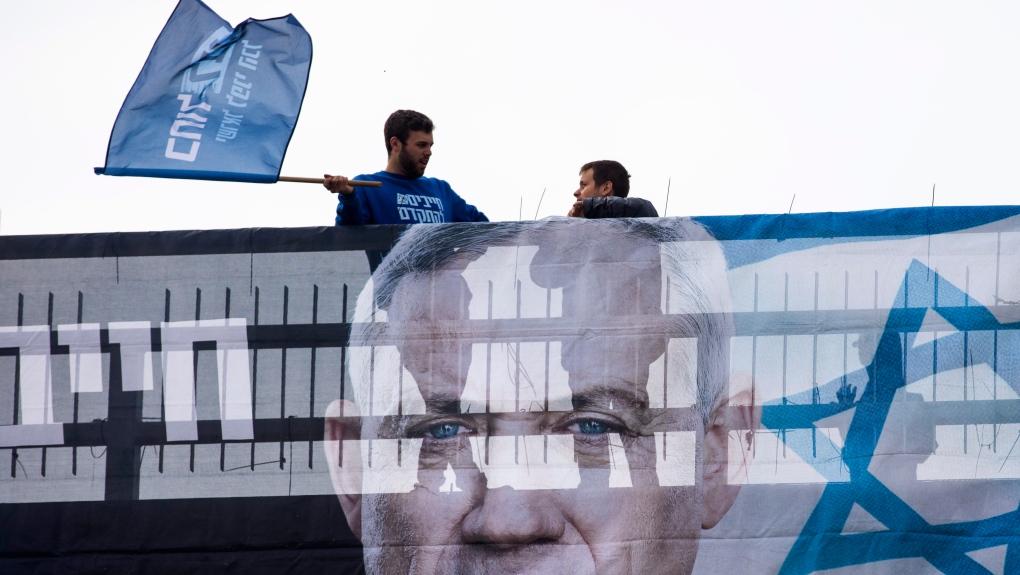 JERUSALEM -- Israeli opposition leader Benny Gantz is vowing to form a government that will include neither the indicted Prime Minister Benjamin Netanyahu nor the predominantly Arab parties in Parliament.

In a series of TV interviews two weeks before national elections, Gantz looked to project confidence that the March 2 vote will provide the decisive outcome that eluded the two previous elections last year.

Gantz's Blue and White party is currently polling ahead of Netanyahu's Likud, although neither appears to have a clear path to a parliamentary majority required to form a coalition government.

Gantz laid out two potential paths while speaking to Channel 12 News on Saturday night. He said he's either going to partner with a broad range of "Jewish and democratic" parties -- including the ultra-nationalist party led by apparent kingmaker Avigdor Lieberman. Or he could team up with the ruling Likud Party, but only if it gets rid of longtime leader Netanyahu, who's fending off a slew of criminal corruption charges.

"Netanyahu has ended his historic role from a political standpoint. The Likud with Bibi cannot form a government, and without Bibi there's unity," he said, referring to Netanyahu by his nickname.

Gantz, a former military chief, has been campaigning furiously in pursuit of a knockout punch as the election grows nearer. He appears to have grown closer to Lieberman, whose nationalist Yisrael Beitenu party has bolted from Netanyahu's right-wing camp and sparked the unprecedented stalemate in Israeli politics that led to the multiple repeat elections.

Both deny they have reached any pre-election alliance, but Lieberman has all but ruled out sitting in government with his former mentor. Lieberman has conditioned his participation in government upon the removal of the ultra-Orthodox Jewish parties that he says have wielded disproportionate power for too long and have been a consistent base for Netanyahu's bloc.

"The Netanyahu era is over," Lieberman said Saturday, expressing a newfound openness to sitting in government with left-wing parties he once shunned.

Still, the numbers don't seem to add up without at least the tacit support of the Arab parties who are anathema to Lieberman's hard-line brand of politics. Netanyahu has based his campaign on linking Gantz to the Joint List, an umbrella group of mostly Arab parties who represent the country's 20% minority, saying he has no option of forming a government without them. Gantz denied he will invite them into his government, saying there is too wide an ideological gap between them. He also claims he will be strong enough to rule without their outside parliamentary support.

Joint List leader Ayman Odeh says he will act to topple any government that includes Lieberman, who has long railed against Arab lawmakers as a fifth column and as terrorist sympathizers. And unlike the previous round, he says he will not recommend Gantz as prime minister if he continues with an approach of "racism toward Arabs."

Even with the corruption indictment against Netanyahu and the unveiling of President Donald Trump's Mideast plan, polls are predicting a similar outcome to the previous election in September, when neither Gantz not Netanyahu could form a coalition in the time allotted to them. Netanyahu has since fended off an internal challenge to his Likud leadership and the party has refused previous suggestions it join a unity government without him. But Gantz is banking on a surge in support this time around, after judges have already been selected to preside over Netanyahu's upcoming trial. The public also seems weary of the prospect of yet another deadlocked result and the potential for a fourth election.

Israel's attorney general charged Netanyahu in November on three counts of bribery, fraud and breach of trust. Under Israeli law, public officials are required to resign if charged with a crime. But that law does not apply to the prime minister, who can use his office as a bully pulpit against prosecutors.

Netanyahu has failed in efforts to secure himself parliamentary immunity, and with his trial looming Gantz has been pushing for a fresh start.

"He's about to go to trial. Just imagine that while he is sitting down to prepare for trial with a battery of lawyers about fateful issues from his personal standpoint, the military chief of staff needs to hold a very urgent meeting at night from a security standpoint," Gantz said.

Netanyahu has tried to portray himself as a master statesman for securing pro-Israel pledges from President Donald Trump, such as extending Israeli sovereignty over the Jordan Valley and the West Bank Jewish settlements. But Gantz said he too would implement the American president's Mideast plan, without all of Netanyahu's baggage.

"I don't believe anything from Netanyahu. I think he says things only on a political level and doesn't mean it," he told Channel 12.