Hundreds in Rwanda march in protest over acquittals at genocide tribunal 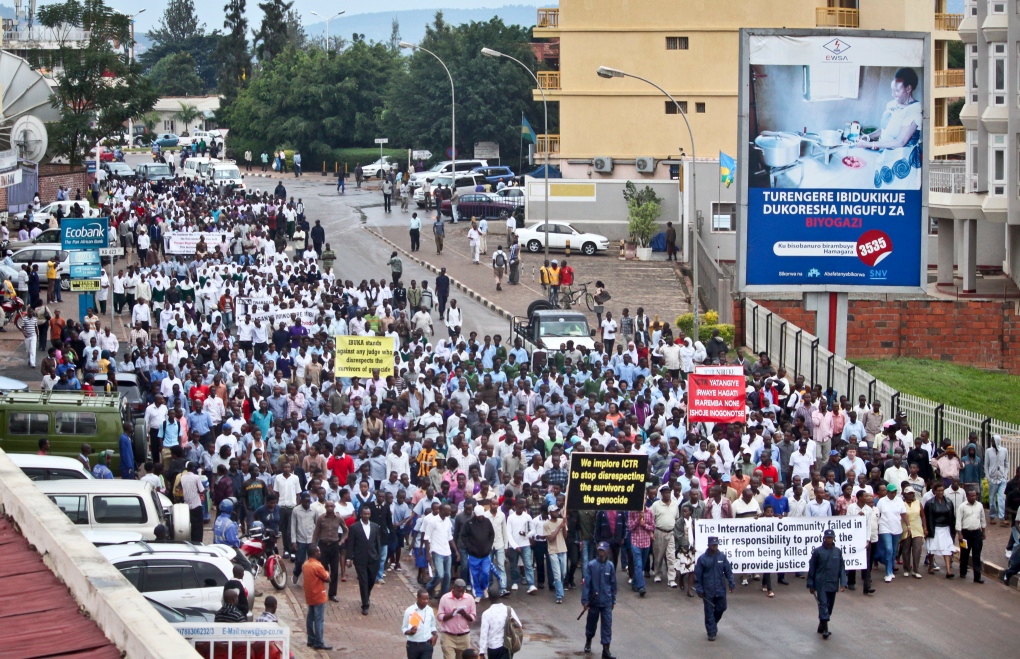 Survivors of the genocide, youths and students march towards the offices of the International Criminal Tribunal of Rwanda (ICTR), whom they accused of denying justice to genocide victims, in Kigali, Rwanda on Feb. 11, 2013. (AP Photo)

KIGALI, Rwanda -- Hundreds of Rwandans on Monday marched to the offices of the United Nations tribunal set up to try key cases related to Rwanda's 1994 genocide to protest the court's decision to acquit two former cabinet ministers accused of masterminding killings.

The protesters, bearing placards denouncing the Arusha, Tanzania-based International Criminal Tribunal of Rwanda (ICTR), mainly constituted of survivors of the genocide, youths and students who accused the tribunal of denying justice to genocide victims.

"The international community failed in their response to protect the Tutsi from being killed and now it is failing to provide justice to survivors," one of the banners read.

More than 500,000 ethnic Tutsis and moderate Hutus were killed during Rwanda's 1994 genocide. The genocide tribunal has been trying leaders of the killings for several years.

Monday's march, which was organized by the Association of Genocide Survivors IBUKA, voiced opposition to the decision by the tribunal's appeals chamber to acquit Justin Mugenzi, a former minister of commerce, and Prosper Mugiraneza, who was the minister of public service when the killings erupted. The two were originally sentenced to 30 years but their sentences were overturned.

"We implore the ICTR to stop disrespecting the survivors of the genocide perpetrated against the Tutsi. IBUKA stands against any judge who disrespects the survivors," said the president of the group, Jean Pierre Dusingizemungu. "The ICTR receives an annual budget of $250 million annually but regardless of this, the court has failed to deliver justice as it would have. Clearing the two former ministers of any wrong doing is tantamount to genocide denial,"

Efforts to reach the court spokesman for comment failed.