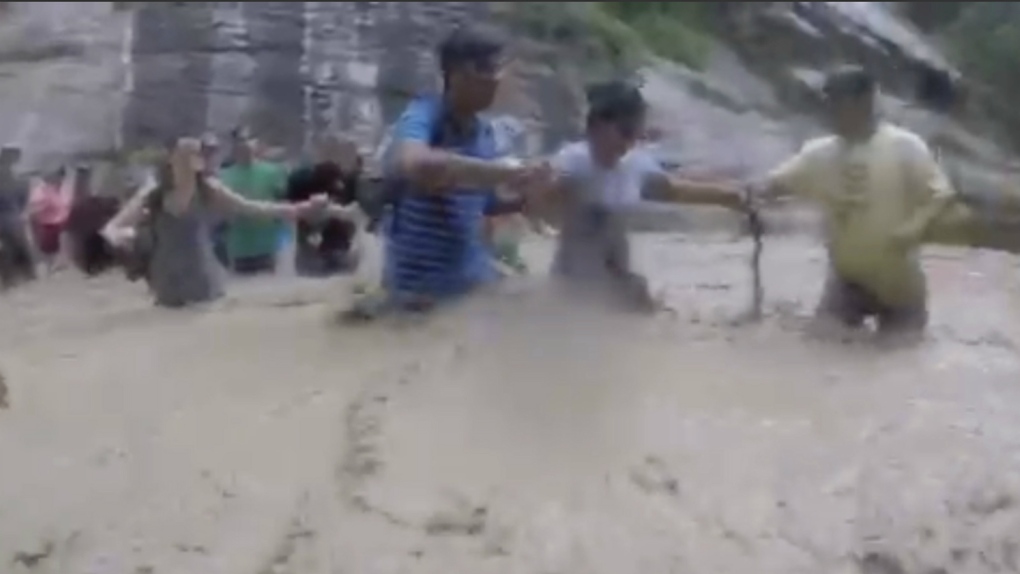 Hikers are seen forming a human chain to cross a river swollen with flash flood waters in the red-rock Utah Desert at Zion National Park in Utah on July 29, 2017. (Jhonatan Gonzalez)

SALT LAKE CITY - One of several hikers who formed a human chain across a river swollen with flash flood waters in the Utah desert said Thursday it was powerful watching people help each other through the dangerous situation.

"There's no way out you just have to go through," said Gonzalez, 40, of Maui, Hawaii.

He and a group of about 15 family members turned back when they saw the current become strong during a river hike known as The Narrows, but they soon reached an area where the water was higher.

Gonzalez and his brothers originally stood in the water together to help several younger family members ranging from 1 to 8 years old cross the river.

Strangers joined their line as they continued to help dozens of other hikers cross the river choked with logs and debris.

Hiking the narrows down in #zions when we got hit by a #flashflood and stayed to help people cross a fast flowing part of the river with my uncles, then a lot of others joined in to help, awesome experience. #adventure #service #narrows #spirithoods #spirithoodstribe #hiking (video by @23boxer) happened Saturday 29th of July around 11 or 11:30

Gonzalez paused briefly to take a video of the effort with his cellphone.

"It felt good. It was a chilling experience. It almost made me feel teary, just seeing how everyone was helping each other," he said.

Zion closed the area later that afternoon after a flash-flood warning. Ranger John Marciano says rangers work hard to warn people to watch weather reports and be careful of fast-moving water. Anyone caught in risky weather should get to high ground immediately, especially in the river where rocks can quickly become treacherously slippery.

Flash floods at Zion have proved fatal in the past, including a devastating 2015 flood in a deep, narrow canyon that killed seven people.

In Arizona, dozens of hikers have been rescued from floodwaters in recent weeks. Ten people died in mid-July when a sudden rainstorm thundered through a tranquil swimming area about 161 kilometres northeast of Phoenix.