Julie Watson and Elliot Spagat The Associated Press Published Friday, May 10, 2019 1:56AM EDT 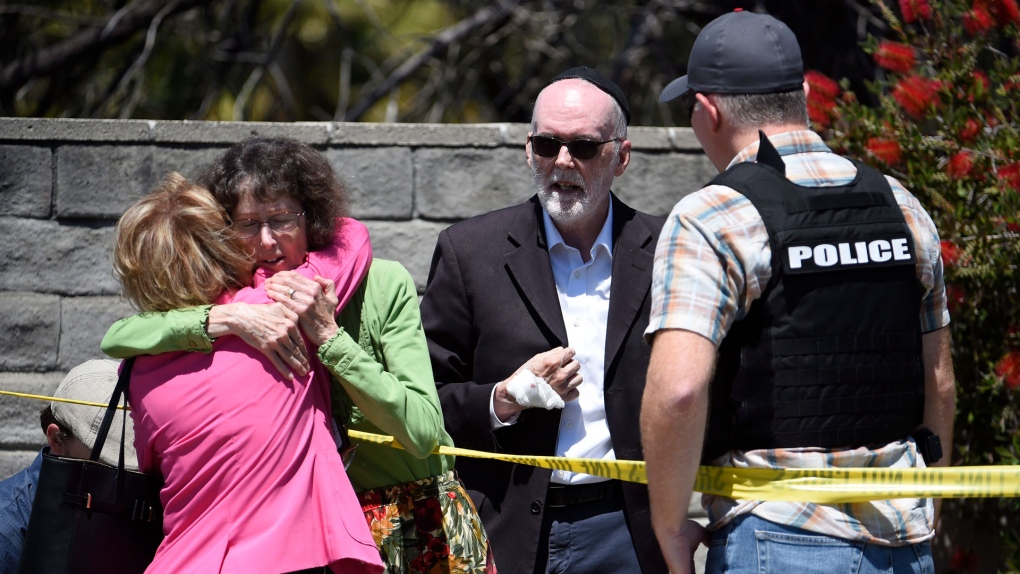 Two people hug as another talks to a San Diego County Sheriff's deputy outside of the Chabad of Poway Synagogue Saturday, April 27, 2019, in Poway, Calif. (AP / Denis Poroy)

He told the dispatcher that he thought he had killed some people and that he did it "because Jewish people are destroying the white race."

The chilling account in a federal affidavit unsealed Thursday was the most detailed yet of a gunman's attack on a Southern California synagogue that killed a woman and wounded three others during Passover service last month in the San Diego suburb of Poway.

It describes a deeply disturbed man filled with hatred who claimed to be inspired by the attacks on the mosques in New Zealand and the shooting at the Pittsburgh synagogue last fall.

The Department of Justice filed 109 hate crime and other charges against the suspect, John T. Earnest, who could face the death penalty. The federal charges include murder for the killing of 60-year-old Lori Kaye, who was hit twice as she prayed in the foyer of the synagogue. It also includes charges for the attempted murder of 53 others.

In a court appearance last month, Earnest pleaded not guilty to state charges of murder and attempted murder and in a separate case to an arson charge tied to a mosque fire.

During the 911 call, Earnest said he killed because he was "trying to defend my nation from the Jewish people ... They're destroying our people," according to the affidavit.

He then told the dispatcher where he was at, that he would surrender to authorities and leave his semi-automatic rifle in the car. He also said he was wearing a chest rig with additional ammunition, which the dispatcher asked him to remove.

Shortly after that, police arrested Earnest.

Police would later learn it was not the first attack on a house of worship by the suspect, according to the affidavit.

The nursing student and gifted pianist had tried weeks earlier to burn down a nearby mosque in Escondido, where seven people on a spiritual retreat were sleeping, according to the affidavit. They awoke to flames licking at the door and managed to extinguish the fire, which charred a wall.

Outside the mosque, the suspect had scrawled the name of the man accused of carrying out shootings at two mosques in New Zealand that killed 50 people.

In his online postings, Earnest said he was inspired by those attacks and the one last fall on the Tree of Life synagogue in Pittsburgh, and boasted about how "easy" it is to burn down or shoot up a mosque, synagogue, immigration centre, or "traitorous" politicians, according to court documents.

A copy of the web posting of the New Zealand suspect Brenton Tarrant was found on his laptop, authorities say.

A month after his failed attempt to burn down the mosque, authorities say, Earnest bought an AR-15 rifle from a licensed dealer in San Diego.

The next day, a Saturday, marked the last day of Passover, a major Jewish holiday.

Just as the service was getting started, Earnest pulled up to the synagogue in his Honda Civic and walked in firing his AR-15, which was fully loaded with a 10-round magazine.

Kaye fell to the ground. Then Rabbi Yisroel Goldstein, who was leading the service, was shot as he rushed to get the children out, including his own grandchildren.

Also hit by shrapnel were an 8-year-old girl and her uncle.

The shooter emptied his magazine and stopped as he struggled to reload it, according to the affidavit. That's when several members of the congregation, including an off-duty Border Patrol agent, chased Earnest from the synagogue.

His family has said they will not pay for his defence and that he represents none of the values they taught him and are stunned at his embrace of white supremacy.

Authorities said Earnest frequented dark corners of the web that often post extremist, racist and violent views. In his online postings, he said, "As an individual, I can only kill so many Jews."

The Chabad of Poway applauded the federal charges Thursday but said more must be done to prevent people from being led astray by such hatred.

"We are grateful to our country's dedicated law enforcement authorities for taking the appropriate measures to ensure the safety and wellbeing of its citizens," the synagogue said in a statement. "As a society we must surely focus on the preventive measure of instilling in our youth a sense of personal accountability to a Higher Being, in whose image every human being was created."