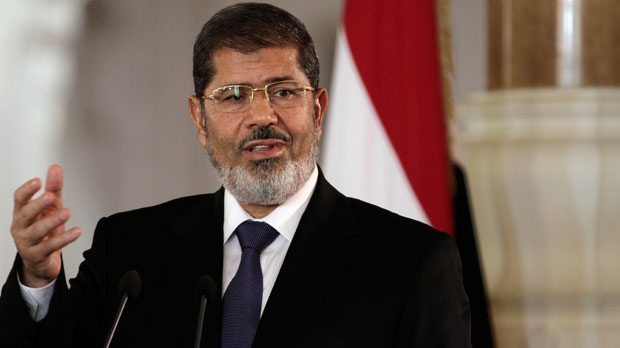 CAIRO, Egypt -- The Simon Wiesenthal Center, which monitors anti-Semitic incidents worldwide, has made a strong condemnation of Egypt's new President Mohammed Morsi of the Muslim Brotherhood, after he attended a sermon where the preacher called for the "destruction and dispersal of the Jews."

A video emailed by the centre showed Morsi at a mosque in the Mediterranean town of Marsa Matruh, where the congregation answers "Amen" to a cleric who recites a list of prayers in a traditional ritual.

In one of the prayers, the cleric asked God to "destroy the Jews and their supporters and disperse them, rend them asunder." Morsi is then seen continuing to say Amen. The prayers were aired on state TV and caught on video by MEMRI, a pro-Israel media monitoring group.

In a statement, the Wiesenthal Center strongly condemned the video, saying it is a sign of growing anti-Semitism in Egypt.

"This is a slap in the face to America as Egypt's President Morsi pockets billions in U.S. aid and says Amen to principles that are repugnant to all Americans," the statement said, quoting Rabbi Marvin Hier, dean and founder of the Wiesenthal Center, and Rabbi Abraham Cooper, the Center's associate dean.

The centre called for President Barack Obama to condemn "the growing chorus of anti-Semitism in Egypt, led by the Muslim Brotherhood" and to cut contacts with the group.

It is the second statement on Egypt this month by the centre, which earlier condemned comments made by the Brotherhood's leader, Mohammed Badie, who said that Jews were spreading "corruption," had slaughtered Muslims, and desecrated holy sites. He also called on Muslims to fight Israel, saying Zionists only understood force.

Prayers denouncing Israel or the Jews -- two terms often used interchangeably in Arab countries -- are not uncommon in hardline sermons, which were not a regular feature on state TV before the ouster of former President Hosni Mubarak.

Since taking office, Morsi has refused to meet with Israeli officials, or even use the word Israel in public statements. But his government has continued security co-operation with the Jewish state and says Egypt will continue to abide by the peace treaty signed between the two countries in 1979.

Last week, however, Morsi faced a chorus of angry critics when it emerged that the new Egyptian ambassador to Israel carried an endorsement letter signed in Morsi's name that referred to Israeli President Shimon Peres as "great friend."

Many of Egypt's revolutionary groups and prominent opposition figures criticized Morsi for calling his Israeli counterpart a "friend." Some demanded an explanation for the discrepancy between his group's public stance against Israel and the diplomatic note.

One former supporter of Morsi, prominent left-leaning TV personality Hamdy Kandil, subsequently quit a group supporting the president, citing the letter as one of the reasons. "Morsi must explain to us how his friendship was strengthened with his great friend," Kandil wrote on his Twitter account.