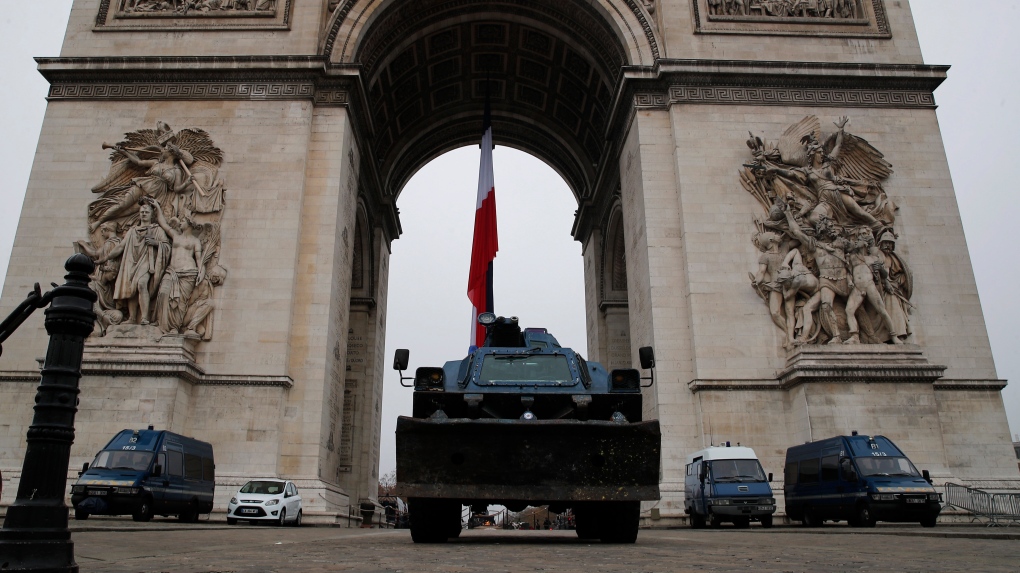 As a crippling transportation strike entered a sixth straight day, commuters and tourists in Paris used used apps, shared bikes and creativity to find ways to get to work, school and museums.

Many French commuters still express support for the strikes, fearing their own pensions will shrink under President Emmanuel Macron's new plan. But some admitted their patience is wearing thin with the transportation woes -- and with train workers who are striking to keep their right to retire years earlier than others.

The number of striking workers was lower Tuesday than when the strike movement kicked off last Thursday and brought 800,000 people to the streets. But unions hope Tuesday's demonstrations send a loud message to the government as it prepares to unveil details of the new retirement plan Wednesday.

Unions fear it will force people to work longer for smaller pensions, even though the government says it won't raise the official retirement age of 62.

Under a sea of red union flags, thousands of activists and workers from across the economy, young and old, gathered at the gold-domed Invalides monument for a march past the Montparnasse neighbourhood to southern Paris.

Paris deployed thousands of police and ordered shops and restaurants closed along the march route, after clashing with rioters on the margins of last week's protest.

Demonstrations were also held in other cities, from Marseille on the Mediterranean to Bordeaux, Lyon and Lille.

Nationwide, only about a fifth of French trains ran normally Tuesday, frustrating tourists who found train stations empty and trains cancelled. Most Paris subways were at a halt, and just one bus in three was running normally. The Paris region rush hour saw double the usual number of traffic jams.

Some commuters used ride-sharing apps or stayed with friends and family near their offices. Others dusted off old bicycles, tested electric scooters for the first time or walked several miles to avoid sitting in traffic-choked intersections.

"Usually it takes me 1 hour and 10 minutes (to get to work), but today I left home at 8 a.m. and it's already 10 a.m. and I'm still not at work yet," said commuter Nabil Nouali, disembarking from a tram on the edge of Paris after coming from the suburbs.

"I understand the situation, (retirement reform) concerns us all," he told The Associated Press. "But at the same time, it penalizes all the people who have to go to work and don't have a car."

Air France, the national carrier, said more than 25% of its domestic traffic was grounded Tuesday by the strike, along with more than 10% of its medium-range flights, on the orders of the French civil aviation authority.

About half of Paris schools were closed and others had many classes cancelled.

Patients waiting for care at Hotel Dieu hospital in central Paris on Tuesday were only impacted by the strikes by the inordinate amount of time it took to get to the hospital with public transport. One 37-year-old woman from Persan-Beaumont in the Paris suburbs had to arrive 5 hours before her blood analysis appointment because of the scarcity of connecting trains.

The strikes are a big test for Macron, who promised to reform France's retirement system while campaigning for president in 2017.

He has ordered two years of consultations with workers and employers about the new system, which aims to blend 42 separate retirement plans into one.

Macron argues that the reform is needed to keep the pension system from sinking into billions of euros of debt as life spans lengthen, and to make it more universally fair to all workers, not just those in certain professions.

Unions, however, fear the pension changes are part of a broader mission to dismantle hard-won worker protections.

Thomas Adamson in Paris contributed to this report