Female suicide bomber in France one of many throughout history 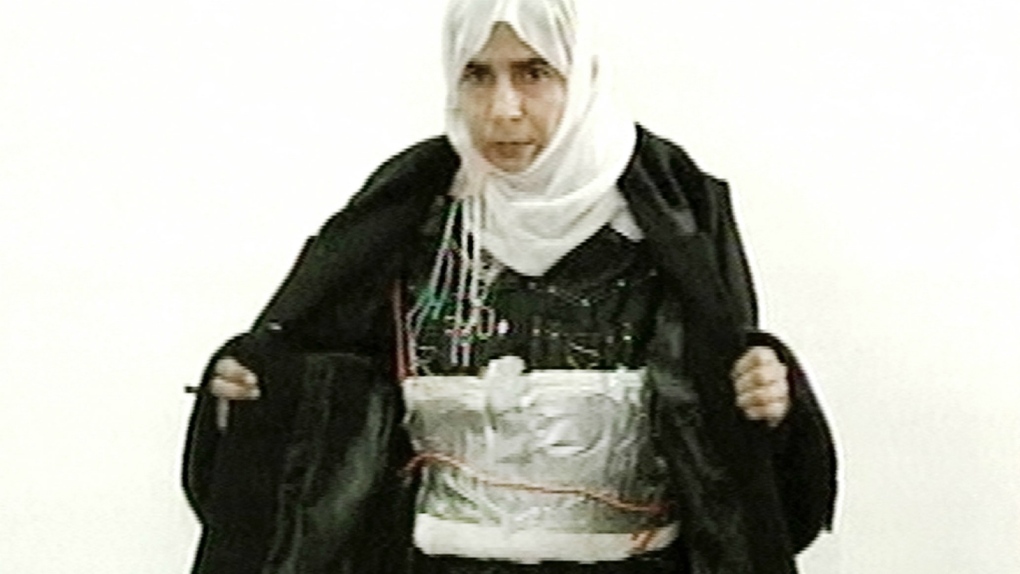 This image made from television shows Iraqi Sajida Mubarek Atrous al-Rishawi opening her jacket and showing an explosive belt as she confesses on Jordanian state-run television to her failed bid to set off an explosives belt inside one of the three Amman hotels targeted by al Qaeda in Jordan on Sunday Nov. 13, 2005. (Jordanian TV)

BEIRUT -- Hasna Aitboulahcen, the woman who is believed to have blown herself up with an explosive vest in a suburban Paris apartment during a police operation Wednesday, was far from the world's first female suicide bomber.

While most suicide bombers are men, Islamic militant groups have occasionally deployed women to carry out such attacks. Long before the rise of Islamic radicalism, female suicide bombers were used by separatist groups in the Arab world and beyond.

A look at female suicide bombers over the years:

During Israel's 18-year occupation of southern Lebanon that ended in 2000, several women belonging to leftist groups blew themselves up while targeting Israeli forces.

Among those was Sanaa Mheidly, 17, who blew up a car rigged with explosives in an Israeli convoy in 1985, killing and wounding more than a dozen Israeli soldiers. She became the most prominent and the first to carry out such an attack in the Arab world.

In the Palestinian territories, about a dozen women have carried out suicide attacks against Israelis since 2002.

Wafa Idris, a 27-year-old Palestinian paramedic, blew herself up in downtown Jerusalem on Jan. 27, 2002. It was unclear if she planned to commit suicide or whether explosives she was carrying went off prematurely. An 81-year-old Israeli man also was killed in that incident.

A decade ago, al Qaeda in Iraq leader Abu Musab al-Zarqawi sent four members of his group -- which would later morph into the Islamic State group -- to carry out bombings in his home country of Jordan.

In that Nov. 9, 2005, assault, Sajida al-Rishawi and her newlywed husband, Ali al-Shamari, entered the ground-floor ballroom of Amman's Radisson SAS hotel where hundreds of people were celebrating a wedding. Al-Shamari set off his explosive belt in the crowd. Al-Rishawi fled.

Al-Rishawi was executed earlier this year after IS militants killed 1st Lt. Muath al-Kaseasbeh, whose Jordanian warplane was shot down over Syria in December.

Kurdish women have carried out several suicide attacks in Turkey since the 1980s, as have female members of groups in their campaign against the government. The most recent attack occurred Jan. 6, when an outlawed group claimed responsibility for a suicide bombing at an Istanbul police station that killed an officer and wounded another. Authorities said the female bomber entered the building in the tourist district of Sultanahmet and blew herself up. In an online statement, the Revolutionary People's Liberation Party-Front, or DHKP-C, said it carried out the attack.

Female suicide bombers from Chechnya and elsewhere in the North Caucasus were common enough that they became known as "black widows" in Russia. Many were the wives of or otherwise related to Islamic militants killed by government forces in their effort to suppress the separatist movement. Two of those women were to blame for the 2010 bombings of the Moscow metro, which killed about 40 people.

In Nigeria, suicide bombings blamed on the militant group Boko Haram increasingly have been carried out by women and girls, some as young as 10. Unlike many of the bombers used by IS in Iraq and Syria, however, there are concerns that the Nigerians are being deployed against their will. A military bomb-disposal expert has told The Associated Press that many of the explosives in those blasts are detonated remotely, suggesting that insurgents are strapping bombs to captive women who are sent to their deaths.

Sri Lanka's Tamil Tiger rebels deployed multiple female suicide bombers as part of a more than two decade insurgency. Their bombing campaign against political, military and economic targets was aimed at creating an independent state for the ethnic minority Tamils. A Tamil woman blew herself up in 1991 in southern India, killing Indian Prime Minister Rajiv Gandhi.

Female suicide bombers are rare in Afghanistan, though one such attack was carried out by an elderly woman in Kunar province in 2010.

IS releases video and photos of men who carry out suicide missions, but they have never posted images of any such attacks by women. Female fighters are active in the group, however, and have a brigade known as Khansaa. In 2010, Abu Omar al-Baghdadi, who was then the leader of the Islamic State in Iraq group, said after a Shura Council meeting that women should not carry out suicide attacks. Current IS leader Abu Bakr al-Baghdadi, who replaced him, is believed to still abide by the rule.

Mia Bloom, a Georgia State University professor and author of "Bombshell: Women and Terrorism," said IS told women in October that they could blow themselves up if they are raided in their house. "She can detonate it without anyone's permission," Bloom said.