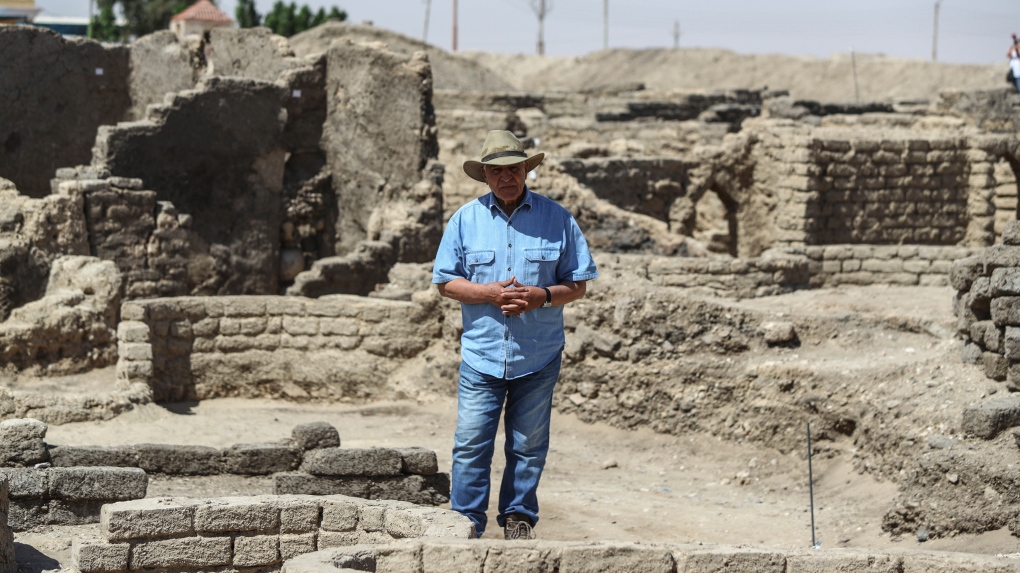 Zahi Hawass talks to media in a 3,000-year-old lost city in Luxor province, Egypt, Saturday, April 10, 2021. The newly unearthed city is located between the temple of King Rameses III and the colossi of Amenhotep III on the west bank of the Nile in Luxor. The city continued to be used by Amenhotep III's grandson Tutankhamun, and then his successor King Ay. (AP Photo/Mohamed Elshahed)

Zahi Hawass said that archeologists found brick houses, artifacts, and tools from pharaonic times at the site of the 3,000-year-old lost city. It dates back to Amenhotep III of the 18th dynasty, whose reign is considered a golden era for ancient Egypt.

"This is really a large city that was lost... The inscription that found inside here says that this city was called: `The dazzling Aten'," Hawass told reporters at the site.

Archeologists started excavating in the area last year, searching for the mortuary temple of boy King Tutankhamun. However, within weeks they found mud brick formations that eventually turned out to be a well-preserved large city.

City walls and even rooms filled with ovens, storage pottery, and utensils used in daily life are said to be present. Archeologists also found human remains that were visible to reporters and visitors on Saturday.

"We found three major districts, one for administration, one for the workmen to sleep, one for the industry and (an) area for dried meat," said Hawass, who spoke to reporters at the site while wearing his iconic Indiana Jones hat.

He said he believes that the city was "the most important discovery" since the tomb of Tutankhamun was unearthed in the Valley of the Kings in Luxor nearly fully intact in 1922.

Hawass also rejected the notion that the city's remains had already been discovered previously, as has been suggested in posts circulating on social media. "It's impossible... that I discover something that was previously discovered," he said.

Betsy Brian, professor of Egyptology at John Hopkins University, agreed that the find was new, calling it "exceptional in scale and organization."

"There's no indication that I am aware of that this town section had been found before, although clearly it represents a new part of an enormous royal city, that we can appreciate far more now," she said.

The newly unearthed city is located between the temple of King Rameses III and the colossi of Amenhotep III on the west bank of the Nile in Luxor. The city continued to be used by Amenhotep III's grandson Tutankhamun, and then his successor King Ay.

Amenhotep III, who ruled ancient Egypt between 1391 B.C. and 1353 B.C., built the main portions of the Luxor and Karnak temples in the ancient town of Thebes.

Egypt has sought publicity for its archaeological discoveries in the hopes of reviving its tourism sector, which was badly hit by the turmoil following the 2011 uprising, and now the coronavirus pandemic.

The announcement came a few days after Egypt moved 22 of its prized royal mummies in a gala parade to their new resting place -- the newly opened National Museum of Egyptian Civilization in Cairo.