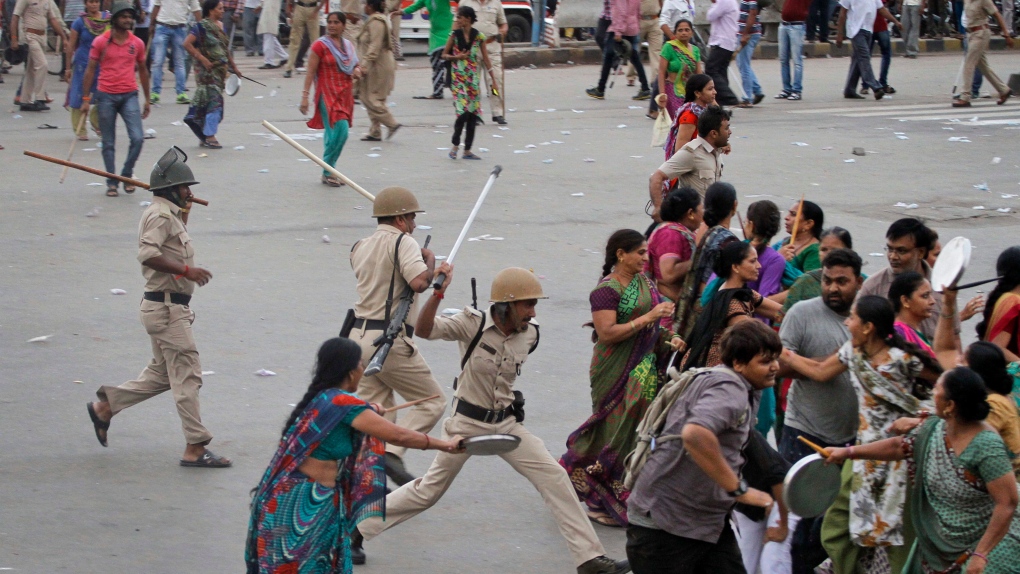 AHMADABAD, India -- Sporadic clashes erupted in parts of western India on Saturday as police detained the popular leader of a farming caste group after denying him permission to hold a rally.

Large groups of Hardik Patel's supporters blocked roads and held sit-ins to protest their leader's detention. By Saturday evening, police had to use batons and tear gas to disperse a crowd of about 3,000 supporters in the region's largest city, Ahmadabad. In retaliation, protesters pelted the police with stones.

There were no immediate reports of casualties from the clashes. When Patel was detained after a similar rally last month, riots erupted across several cities in Gujarat, leaving at least five people dead.

Patel had been detained in Surat on Saturday morning and placed in a police van as thousands of his supporters looked on. Surat is a diamond cutting and polishing hub in Gujarat state.

"The Gujarat government wants to silence our voice. The government and the state police wants violence in the state," Patel told reporters as he was being driven away by police.

Surat Police Commissioner Rakesh Asthana told the Press Trust of India news agency that the 22-year-old leader and a few dozen of his supporters were "detained in the interest of law and order" because they did not get government permission to hold a rally. He said the men would be released later Saturday after Patel's supporters were dispersed.

Ahead of Patel's detention, the Gujarat state government banned mobile Internet services to prevent protests and rumours from spreading. The ban remained in place late Saturday.

The Patidars, also known as the Patel community for the last name they share, are demanding the same special status given to many minorities in India, guaranteeing them a share of government jobs and school placements.