As FBI hunts for clues in Boston bombing, hundreds pray for victims at vigil

As the FBI asked the public to help authorities hunt down whoever is responsible for the deadly Boston Marathon bombings, hundreds of mourners honoured the victims of the attack at a candlelight vigil.

More than 1,000 people were estimated to have gathered at a Boston park Tuesday evening to remember the three lives lost in the blasts and pray for those who have lost limbs and suffered serious injuries.

Earlier Tuesday, FBI special agent in charge Richard DesLauriers told a news conference that the bureau has received more than 2,000 tips so far, but investigators still don’t have a suspect in custody.

“Importantly, the person who did this is someone’s friend, neighbour, co-worker or relative,” he said, urging people to think about the conversations they’ve had in recent days and try to remember anyone who may have been acting suspiciously.

Anyone who discussed the Boston Marathon in “any way that indicated that he or she may target the event” should be reported to the authorities, DesLauriers said.

He also asked the public to report “suspicious interest in researching how to create explosive devices” and sounds of explosions in remote areas in the days prior to the attack, which may suggest that bombs were being tested.

Since no one has claimed responsibility for the attack, “the range of suspects and motives remain wide open,” DesLauriers said.

“Someone knows who did this.”

DesLauriers confirmed that the bombs detonated during the marathon Monday may have been made out of pressure cookers packed with shrapnel -- devices designed to inflict as much damage as possible -- and were hidden inside large black duffel bags or backpacks.

A person briefed on the investigation told The Associated Press one of the pressure cookers contained nails, while the other was packed with metal shards and ball bearings.

Forensic analysts have recovered pieces of black nylon from the scene, in addition to nail fragments and ball bearings. All of that evidence has been sent to FBI’s main laboratory in Virginia for analysis, DesLauriers said.

He appealed to those who saw anyone carrying an “unusually heavy dark coloured bag” near the bombing sites at the time of the explosions to call police.

The bombings Monday killed three and injured 176. Seventeen of the injured are in critical condition. Two of the deceased have been identified as Martin Richard, 8, of Boston, and Krystle Campbell, 29, of Medford, Mass.

Martin was waiting for his father at the finish line. Campbell, a restaurant manager, had gone to the marathon with a friend to snap a photo of the friend's boyfriend, who was participating in the race.

Late Tuesday afternoon, Boston University said one of its graduate students was the third person killed in the bombings. The university said it was not releasing the student’s name, pending permission from the family.

The Associated Press later reported that an official at Chinese Consulate in New York said the third victim was a Chinese national.

More than 2,000 Canadians took part in the race, but none were reported killed or injured.

The deadly attack on the runners and spectators is being treated as an act of terrorism, U.S. President Barack Obama confirmed Tuesday after a briefing with his top security advisers.

"This was a heinous and cowardly act and given what we know now about what took place, the FBI is investigating it as an act of terrorism," Obama said, speaking at the White House. "Any time bombs are used to target innocent civilians it is an act of terror."

Obama said the investigation is just beginning and many question marks remain.

"What we don't know, however, is who carried out this attack or why, whether it was planned and executed by a terrorism organization, foreign or domestic, or was it the act of a malevolent individual."

Obama said the nation's thoughts and prayers are with those injured and the families of those killed in the blast. And he paid tribute to other runners who helped the injured -- first responders who ran towards the explosions to help, and the doctors and nurses who treated the injured.

"If you want to know who we are, what America is, how we respond to evil, that's it -- selflessly, compassionate, unafraid."

Obama vowed investigators would "find whoever harmed our citizens and we will bring them to justice."

The investigation is being carried out by the FBI's Boston Joint Terrorism Task Force which executed a raid overnight, serving a warrant on a home in suburban Boston.

DesLauriers also stressed that investigators are working around-the-clock on the case.

“We’re doing this methodically, carefully, yet with a sense of urgency,” he said.

"There were rumours floating around that there were seven devices at one point. That is not true," said ATF agent Gene Marquez. "We only have two devices we are aware of and both of those devices are the ones involved in the explosives incident."

The area of the blast -- located in the final kilometre of the marathon -- will likely remain a crime scene for several days, officials said. A 12-block area is currently closed off.

Police presence in and around the city will also be boosted in the days to come, but DesLauriers said there are no known additional threats.

Boston Mayor Thomas Menino said it's a difficult time in the city's history, but said Boston will pull through.

"We're going to make sure the city pulls together and we get it under control. Let's continue to work together, let's offer a helping hand to individuals who may need it in this very difficult time in our city's history," he said. "This is a tragedy but Boston is a strong city, we're a city that will get through this."

Robert Siciliano, a runner who took part in the marathon Monday, said he was approaching the finish line as the blast occurred. The explosion sent a cloud of smoke and debris into the air between him and the finish, where his family was waiting.

"I was rounding the corner, I was on Boylston Street, the smoke had just begun to dissipate and I ran towards the smoke, towards the bombings, my family was on the other side and I had to get to them," he told Canada AM Tuesday morning.

He added: "There was screaming, yelling and crying, there was a lot of blood on the ground. I ran through the crowds, I ran around the back end of the finish line and ended up crossing Boylston. ...I instructed my dad to get them out of there because I was concerned there might be another attack."

If you're a Canadian involved in the Boston Marathon explosion and need assistance, contact @TravelGoC 1-800-387-3124 or sos@international.gc.ca.

If you are concerned for a friend that ran the Boston Marathon today, you can see their last check-in here: http://raceday.baa.org/individual.html 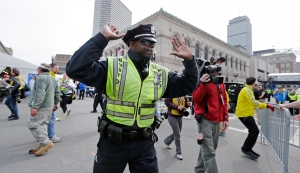 Canadians at the Boston Marathon describe what happened 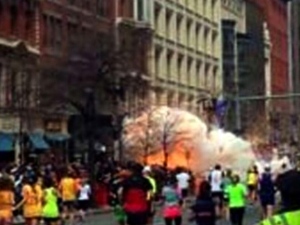 Shock and dismay from the scene of the explosions 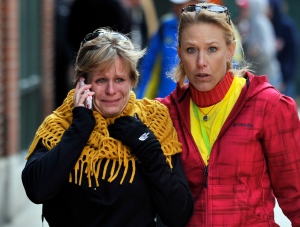 Loved ones use social media to find runners, spectators