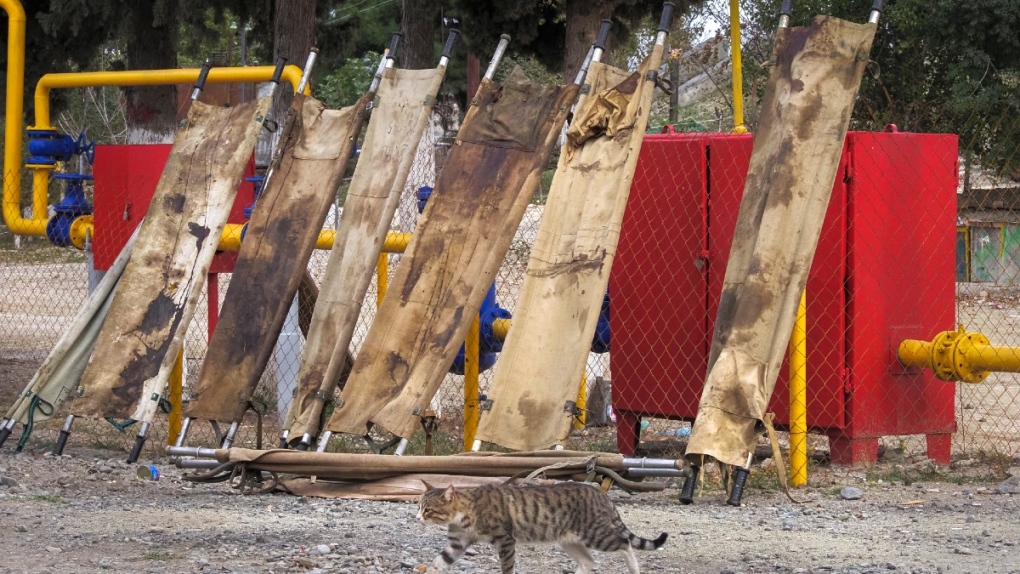 Blood-stained stretchers are dried in the yard of a military hospital near the frontline in the separatist region of Nagorno-Karabakh, on Oct. 26, 2020. (AP)

YEREVAN, ARMENIA -- Fighting over the separatist territory of Nagorno-Karabakh raged on Tuesday, unimpeded by a U.S.-brokered ceasefire, while Armenia and Azerbaijan traded blame for the deal's quick unraveling.

Azerbaijan accused Armenia of striking the Barda region with rockets, killing four civilians, including a 2-year-old girl, and wounding 13 others. The Azerbaijani Foreign Ministry denounced the attack as "another war crime committed by Armenia in recent days in gross violation of the agreed humanitarian ceasefire."

Armenia's Defence Ministry rejected the accusations as "an absolute lie and a dirty provocation." But it also conceded that Azerbaijani forces had "made advances in some directions."

In an address to the nation Tuesday, Armenian Prime Minister Nikol Pashinian vowed that Nagorno-Karabakh forces will mount a counter-attack with a "destructive effect for the enemy."

Earlier in the day, the Armenian military accused Azerbaijani forces of firing at Armenian border guard positions on the country's southern border with Iran, adding that it has retaliated. Azerbaijan's Defence Ministry rejected the statement as "false and provocative."

The U.S.-brokered truce frayed instantly after taking effect Monday, just like two earlier truces negotiated by Russia, with the warring parties blaming each other for violations.

In a bid to save the deal, U.S. Secretary of State Mike Pompeo spoke separately to Azerbaijani President Ilham Aliyev and Armenia's Pashinian on Tuesday. He pressed them to "abide by their commitments to cease hostilities and pursue a diplomatic solution to the Nagorno-Karabakh conflict," the State Department said, emphasizing that "there is no military solution to this conflict."

The United Nations deplored the situation.

"We continue to express our concern and frankly our frustration at the reports of continued fighting," UN spokesman Stephane Dujarric said. "Three times the parties agreed to a humanitarian ceasefire. It is critical that they actually live up to what they committed themselves to do. What we need immediately is a ceasefire to ensure that humanitarian aid gets through."

Dujarric cited recent UN figures showing that cases of COVID-19 had skyrocketed in both Armenia and Azerbaijan and Secretary-General Antonio Guterres' call for a global ceasefire, stressing: "This is a prime example of humans continuing to kill other humans while the virus wins."

The latest fighting, which began Sept. 27, has involved heavy artillery, rockets and drones in the largest escalation of hostilities over the separatist region in the quarter-century since the war ended.

According to Nagorno-Karabakh officials, 1,009 of their troops and 39 civilians have been killed in the clashes so far, while 122 civilians have been wounded. Azerbaijani authorities haven't disclosed their military losses, but say the fighting has killed 65 civilians and wounded nearly 300.

Russian President Vladimir Putin said last week that, according to Moscow's information, the death toll from the fighting was nearing 5,000.

Russia, the United States and France have co-chaired the so-called Minsk Group set up by the Organization for Security and Cooperation in Europe to mediate in the conflict, but their attempts to negotiate a political settlement have stalled.

The Minsk Group's co-chairs are set to meet with the foreign ministers of Armenia and Azerbaijan in Geneva on Thursday, but prospects for progress appear dim.

Azerbaijan's president has argued that his country has the right to reclaim its territory by force after nearly three decades of international mediation have brought no result.

In an interview released on Monday, Aliyev again took aim at the Minsk Group, accusing its co-chairs of working on "freezing the conflict" and offering "just promises, just bureaucratic procedures."

Aliyev said that for the hostilities to end, Armenian forces must withdraw from Nagorno-Karabakh. In Monday's televised address to the nation, He boasted about Azerbaijani forces retaking control over several areas in and around Nagorno-Karabakh.

Turkey has cast strong support behind Azerbaijan, vowing to support its ally "on the battlefield or the negotiating table." It has trained the Azerbaijani military and provided it with strike drones and long-range rocket systems that gave Azerbaijan a strong edge in the latest fighting.

Armenian officials say Turkey is directly involved in the conflict and is sending Syrian mercenaries to fight on Azerbaijan's side. Turkey has denied deploying combatants to the region, but a Syrian war monitor and Syria-based opposition activists have confirmed that Turkey has sent hundreds of Syrian opposition fighters to fight in Nagorno-Karabakh.

In a call Tuesday with Turkish President Recep Tayyip Erdogan, Russia's Putin voiced "deep concern about the continuing hostilities and increasingly massive involvement of terrorists from the Middle East in the fighting," the Kremlin said.

Russia, which has a military base in Armenia and a security agreement to protect its ally, has been involved in a delicate diplomatic game, trying to also maintain good ties with Azerbaijan and avoid a showdown with Turkey.

The Kremlin said Putin and Erdogan agreed to continue co-ordination between the two nations' militaries and security agencies.

Associated Press writers Daria Litvinova and Vladimir Isachenkov in Moscow, Aida Sultanova in London, Edith Lederer at the United Nations and Matthew Lee in Washington contributed to this report.