Algerians are voting for new president or boycotting poll 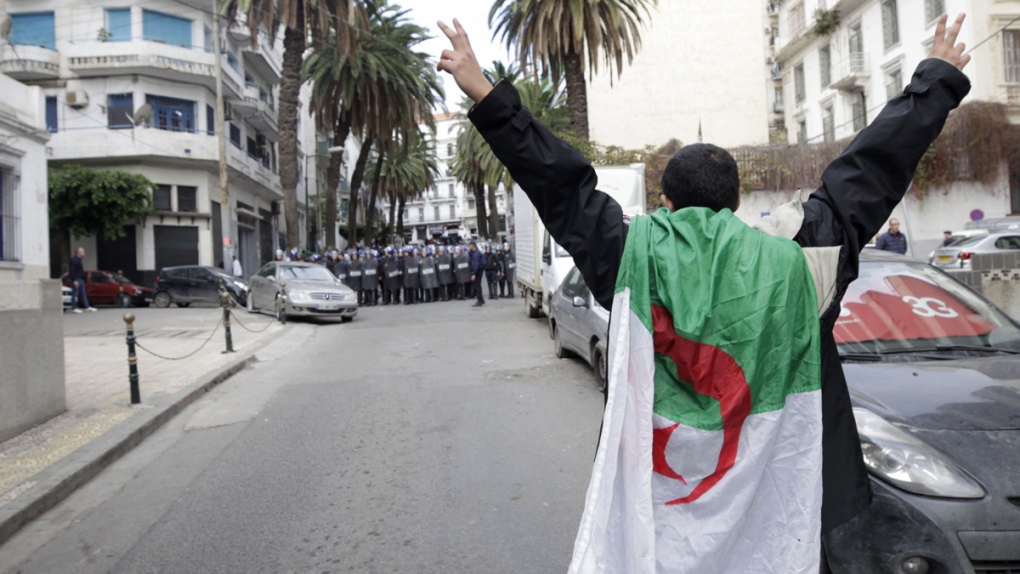 Algerians -- without a leader since April -- voted on Thursday for a new president or boycotted the elections decried by a massive pro-democracy movement that forced former leader Abdelaziz Bouteflika to resign.

All five candidates, including two former prime ministers, were linked to the Bouteflika regime, and protesters fear the elections will perpetuate a corruption-ridden system with military oversight that they are trying to bring to an end. Powerful army chief Ahmed Gaid Salah -- who orchestrated the elections and set the date -- promises the elections will chart the course to a new era in the gas-rich North African nation, a strategic partner of the West in countering extremist violence.

Protesters took to the streets in scattered cities on the eve of the vote, and continued their action on Thursday, with thousands filling a main avenue in Algiers, the capital.

"No to elections of shame" and "generals in the garbage" were among the chants.

Despite the peaceful weekly marches across the nation since February, confrontations with security forces were reported Wednesday night in Bouira, east of the capital, and Algerian media reported skirmishes in front of a voting centre there. There was virtually no voting in the Kabyle region where Bouira is located, known as an anti-government bastion.

The head of the newly created National Independent Electoral Authority, Mohamed Charfi, said the participation rate was at 7.9% three hours after polls opened at 8 a.m. The electoral authority put the voter turnout at less than 1% in the Berber region of Kabyle. Algiers was at under 4.8% before noon.

The disgraced and ailing Bouteflika, who held office for 20 years, cast a ballot via a brother, Nasser, who said that "he remains a citizen with all his rights."

The turnout rate should be a critical indication of whether the candidate elected has popular legitimacy. There was no firm indication which of the five had the upper hand ahead of the vote. Opinion polls for elections are not permitted.

The five candidates, including former prime ministers, Ali Benflis and Abdelmadjid Tebboune, endured insults and protests during the 22-day campaign.

"Today is not just the day of a presidential election, but a day for strengthening the pillars of the republic," said candidate Azzedine Mihoubi, 60, a writer, poet and former culture minister who has recently been touted by the Algerian media as a favourite. "This is a day of victory for Algeria," he told reporters.

Tebboune, 74, was until recently seen as the favourite due to his reportedly close ties to Gaid Salah. Mihoubi has deep ties to the fallen Bouteflika regime. He took over leadership of the National Democratic Rally party, which governed in alliance with the FLN, the sole party for nearly three decades, until 1989, and now is in tatters.

Benflis, 75, is making his third attempt at the presidency. A lawyer and former justice minister, he was Bouteflika's top aide before falling out when he ran against him in 2004. He started his own party.

The other candidates are Abdelaziz Belaid, 56, a former figure in the FLN who started his own party, and Abdelkader Bengrina, 57, a one-time tourism minister and former member of the moderate Islamist party, Movement for a Society of Peace (MSP). He then started his own Islamist party el Bina, which like the MSP, backed Bouteflika.

Gaid Salah, who has emerged as the authority figure in the political vacuum, has maintained that the voting is the shortest and surest way to raise Algeria out of its paralyzing political crisis and give birth to a new era. He was the force behind an anti-corruption campaign that has seen top figures jailed and convicted, including Said Bouteflika, the president's younger brother and chief counsellor, sentenced to 15 years in prison in September for "plotting against the state."

Gaid Salah refers to Bouteflika's entourage as "the gang," as do pro-democracy protesters who include Gaid Salah among them.