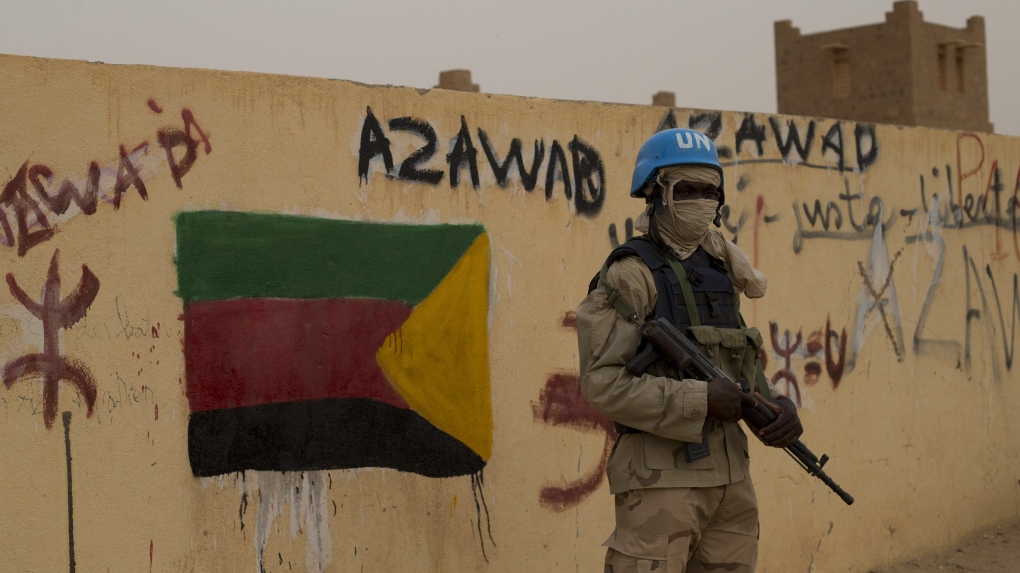 In this Sunday, July, 28, 2013 file photo, a United Nations peacekeeper stands guard at the entrance to a polling station covered in separatist flags and graffiti in Kidal, Mali. (AP Photo/Rebecca Blackwell, File)

BAMAKO, Mali -- Al Qaeda-linked jihadists carried out one of the deadliest attacks on a United Nations peacekeeping mission in months, killing 10 peacekeepers and wounding at least 25 in northern Mali, the UN said Sunday.

All of the peacekeepers killed in the assault on their camp in Aguelhoc were from Chad, the UN. secretary-general's spokesman said in a statement. He strongly condemned the attack, saying it may constitute a war crime.

Peacekeepers "responded robustly and a number of assailants were killed," the statement said. Residents said the attackers in the Sunday morning assault arrived in motorcycles and cars.

The 15,000-strong peacekeeping mission in Mali, established in 2013, is one of the UN's deadliest. The West African nation is under threat from a number of extremist groups affiliated with al Qaeda and the Islamic State organization, and attacks have moved from the arid north to more populated central Mali.

The UN mission is one of several military efforts to fight the jihadists, alongside Malian forces, France's largest overseas military operation and a recently formed five-nation regional counterterror force.

Peacekeepers from Chad, a strong contributor to regional security efforts, have suffered from the repeated assaults in Mali. As of the end of 2018, 51 Chadian peacekeepers had died while serving the UN mission.