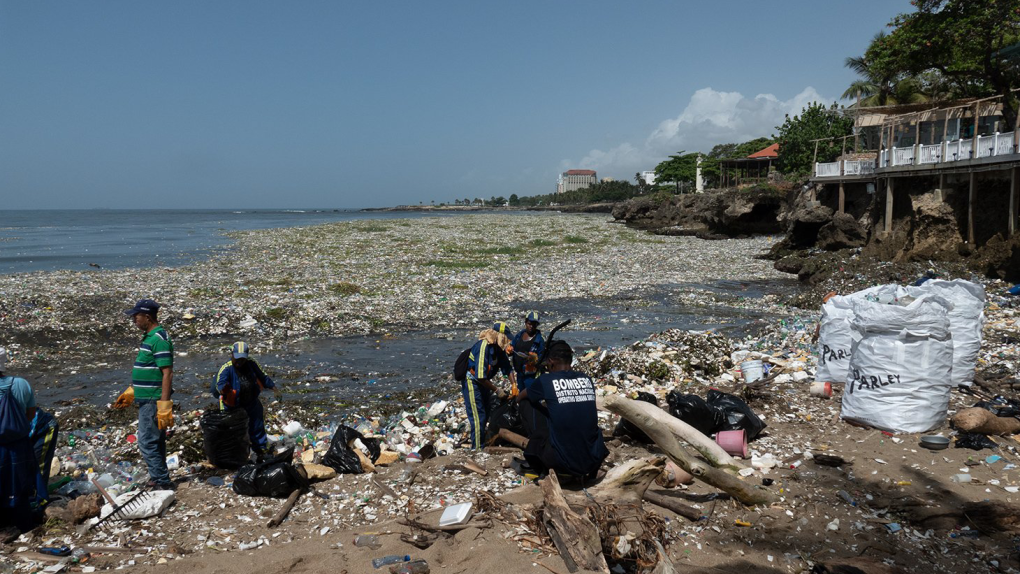 Workers collected garbage on a beach near Santo Domingo, the capital of the Dominican Republic. (Parley for the Oceans / Twitter)

Every year, thousands of Canadians flock to the Dominican Republic for vacation, with the country’s Ministry of Tourism boasting iconic sights, rich nightlife, and “palm-studded, continuous diamond white beaches.”

But video footage shot last week by the environmental group Parley for the Oceans may have some travellers second-guessing their beach getaways this year.

The video shows a thick carpet of garbage covering the water, with styrofoam takeout containers, plastic bottles and other unidentifiable waste crashing ashore onto Montesinos Beach, not far from the capital city of Santo Domingo.

While plastic garbage floating in the oceans is not a new phenomenon, the sight of so much garbage so close to land has drawn a lot of attention online.

“Seeing this firsthand is absolutely shocking, but what’s worse is that this is not news in Santo Domingo,” Parley for the Oceans’ Carmen Danae Chamorro said in a post on the group’s website. “This situation happens every time it rains heavily.”

The nonprofit is calling the garbage accumulation a “state of emergency” and says they’re working with more than 500 volunteers from the navy, army, and public works to clean up the affected beaches.

Using heavy machinery and trucks, they’ve collected almost 1,000 tonnes of plastic since July 13– most of which the group says will have to be sent to landfills.

Despite those efforts, they say more plastic arrives on the beaches each day.

Parley says they’ll be working with the government on the island to try and develop long-term plans to improve the island’s waste infrastructure.