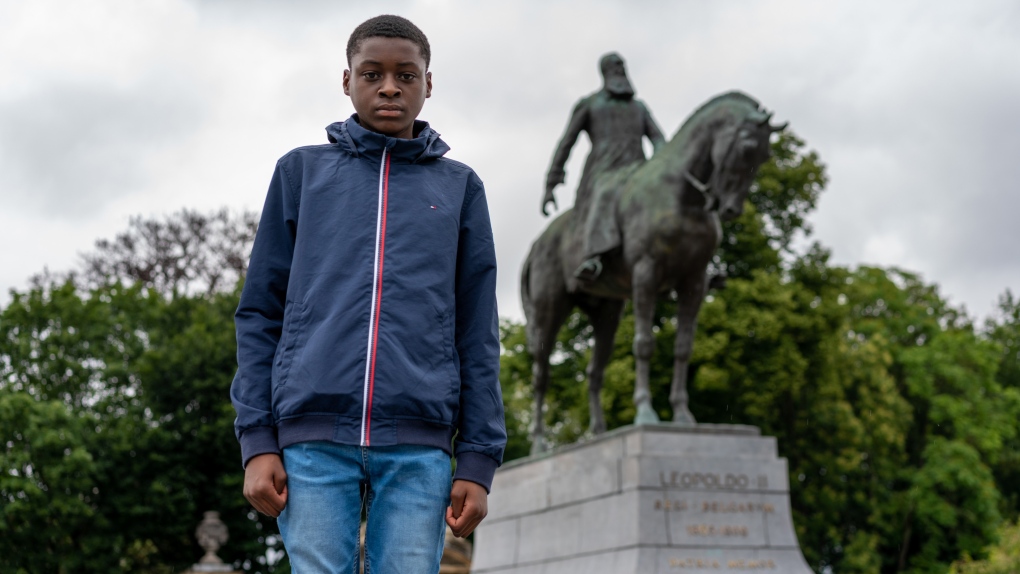 Noah, 14, is leading a campaign calling for statues of Leopold II to be torn down, because of the Belgian king's involvement in slavery. (Martin Bourke / CNN)

Noah, a slight teenager wearing jeans and sneakers, is dwarfed by the bronze statue of Belgium's King Leopold II astride a horse. The statue, set high on a concrete plinth, has stood opposite the Royal Palace in Brussels since 1926.

That could change soon. Armed only with history and an online petition, 14-year-old Noah is determined to bring Belgium's controversial "Builder King" crashing down.

Noah's parents are from what is now the Democratic Republic of Congo. In the late 19th century, the country -- then personally owned by Leopold II -- was a place of extraordinary cruelty, where hundreds of thousands of Africans died in slavery.

As statues linked to slavery and racism began to tumble in the U.S. and Europe, Noah set up an online petition to have Brussels' memorials to Leopold torn down. He called it "Reparons l'histoire" (Let's repair history); it has 80,000 signatures and counting.

CNN agreed to Noah's request not to use his last name due to the current tense political climate.

Noah says not enough Belgians understand the history of what was ironically called the Congo Free State.

"I hope young people of my age and younger start to take responsibility and talk and make their voices heard," he says confidently.

Those in authority may now be listening. Last week, Belgium's parliament approved a national inquiry into Belgian colonialism.

Els Van Hoof, a Belgian MP who leads the chamber of representative's foreign affairs committee, says the inquiry may tackle the question of what to do with statues of Leopold II, though the exact scope of work has yet to be determined.

It will be the first time that Belgium has embarked on such a broad effort to confront its colonial sins.

When Leopold took the throne, he was desperate for Belgium to become a colonial power. The Belgian parliament, however, did not share the same goal. So instead, Leopold convinced European powers and the United States to recognize a massive swath of Africa as his own privately-owned colony. It only became a Belgian colony after he was forced to relinquish control.

Leopold sent in a private army to force local people to collect ivory and rubber. Those who resisted, or were unable to meet the impossible work quotas imposed on them, faced mutilation, amputation or execution.

Historians estimate that at least half a million people died under Leopold's misrule, but its horrors have received little attention in modern Belgium.

Just outside Brussels, in the small, affluent suburb of Tervuren, a burial site is tucked inside the courtyard of the church of St. John the Evangelist, just a few steps away from a square lined with quaint cafes and shaded outdoor patios.

People shuffle past, rarely stopping to visit, unaware of the history beneath their feet.

The seven graves, set beneath an arched stained-glass window, are inscribed only with first names: Kitoukwa, Sambo and M'Peia, among others. The people buried here were brought to Belgium in the final years of the 19th century, to be put on display, only to succumb to pneumonia when the weather turned cold.

"It was basically like a human zoo," explained Guido Gryseels, director of the Royal Museum for Central Africa -- an ornate, palatial building, set in an expansive manicured garden.

The "zoo" featured more than 250 Congolese people, who were kept in four "authentic" African villages.

"They had to do rowing races on the lake and the women had to cook and make all sorts of things like African objects. And basically, Belgians came and looked. It was pure racism," said Gryseels.

Over the course of a decade, some 60 Congolese children were also brought to Belgium without their parents, to attend school and to be exhibited to the public, according to a historical marker in park near the museum. Twelve of those children died.

The profits Leopold made off the backs of slavery in Congo funded a series of grand monuments to cement his legacy, from Brussels' imposing Cinquantenaire Arch, to boulevards like the one that links the capital with Tervuren, to the countless statues erected in his honor, both during his 44-year reign and after his death in 1909.

Now, those visual markers are front and center in a national debate about Leopold's legacy, echoing similar soul-searching in Britain and the United States over statues memorializing men involved in the slave trade.

Protesters have already set fire to one statue of Leopold II, in Antwerp. Others, In Ghent and Ostend, have been damaged or defaced.

In the Brussels suburb of Auderghem, protesters took a sledgehammer to a bust of Leopold II, leaving it face down in the dirt and covered in red paint.

Auderghem's mayor, Didier Gosuin, a former history teacher, told CNN he is committed to returning the statue to its empty plinth -- with the addition of a plaque detailing the positive and negative impacts of Leopold II's rule. He worries that vandalizing statues will only serve to stoke polarization.

"There are two clans forming now: Those who want to remove the colonial past and another who are attached to their history or who remain convinced that Belgian colonialism was positive," Gosuin said, adding: "We should profit from this moment, to give another vision of history."

A competing petition created in response to Noah's calls for Brussels to keep it's statues to Leopold II in place arguing, "He is not a slave king, he only delegated powers to certain people to manage the colony."

Belgium's Prince Laurent made similar comments in a recent interview. More than 20,000 people have signed the petition.

The contentious Royal Museum for Central Africa in Tervuren is trying to settle those competing interpretations of history by presenting the unvarnished truth, according to its director, Gryseels.

The museum was originally built at Leopold's direction to glorify Belgium's role in Africa; it proudly displayed the spoils of colonialism and presented white people in a superior light to Africans. A bust of Leopold, carved from ivory, is still among its exhibits.

After a five-year facelift, the museum reopened 18 months ago -- amid controversy. Its displays have been redesigned to better reflect Belgium's troubled past in Africa -- in Congo, Rwanda and Burundi -- and it now includes contemporary works from African artists, in response to its colonial collection.

It may need to alter its exhibits again to reflect the current debate -- Gryseels told CNN he has fielded calls from several Belgian cities looking to donate statues of Leopold and other colonial figures they no longer wish to display.

"We haven't really decided yet whether we want to become a memorial or shrine to Leopold II or whether we can convert [the statues] into some sort of work of contemporary art," he said.

"We're thinking of making a special showcase with King Leopold II busts and then give a contrasting message at the same time."

Even that may be a risky endeavor.

A prominent outdoor statue on the grounds of the museum perfectly reflects Belgium and the museum's uncertain feelings toward Leopold II and its colonial past. The sculpture, unveiled as recently as 1997, includes African figures missing their feet.

Its creator, Tom Frantzen, has said it was never intended as an homage to the king, but that he had to be subtle in his criticism of Leopold, because he had been commissioned to create a tribute to him. Frantzen's partner, Martine Bode, told CNN in an email that he "had to move heaven and earth to get permission to depict the black warriors with lopped off feet."

But Gryseels doesn't buy that. The Museum's website said "it was clear" the statue was placed to honor Leopold II and that at the time of its creation Frantzen "hardly" mentioned the atrocities committed in Congo.

Frantzen has proposed changes to make the artwork's meaning more clear. In the meantime, the sculpture has been doused in red paint, and given a dunce's cap for good measure.

Gryseels laments what he says is a history deficit in Belgium -- there is no nationwide requirement for Belgian students to learn about colonial history in school.

"The most important thing for me is that Belgium reintroduces this colonial history in the curriculum of the schools," he said. "Until children are taught about colonialism, they are not going to know."

Belgium's first black mayor, Pierre Kompany, also believes a better understanding of history will change people's minds. Kompany, who was born in Belgian Congo, arrived in Belgium as a refugee in the 1970s.

Sitting in a cafe in Ganshoren, the Brussels suburb where he has served as mayor for the past two years, Kompany, 72, speaks with the intensity of someone who has spent a lifetime in politics -- the conversation interrupted only by his instinctive need to wave, or say hello to nearly every passing constituent.

Noah is keen to stress that the story of Belgium's "human zoo" is anything but ancient history, pointing out that the mock-African village was revived for the World Expo in Brussels in 1958.

"That wasn't that long ago," he said. "There were people who were born then who are alive now. It was inhumane."

"It was so brutally racist that people were throwing bananas, they were throwing food to them," explained Gryseels. "A number of them quit and refused to work there anymore and went back to Congo."

The exhibition was shut down after that.

Noah says he too has faced racist taunts and abuse.

"People have told me: 'Go home, it's not your country, you are black, you are not like us.' I am Belgian. I was born here," he said. "They want to make me feel like it isn't my country and it isn't my place here."

In response to Noah's petition, a spokesperson for Brussels Mayor Philippe Close told CNN he doesn't have the authority to remove statues of Leopold II, which are national monuments.

He does, though, support a national conversation on their fate.

The approaching "truth and reconciliation" commission is a historical reckoning that Belgium has put off for generations. perhaps because many Belgians have done humanitarian work in Congo, and African migration to Belgium has only arrived in recent decades, says Van Hoof, the Belgian MP.

"It is not just one story, there is some nuance," she said. "We don't have to cover up the bad things or the good things, and that's what has happened I think."

Noah, whose petition demands that the statues be removed by June 30 -- the 60th anniversary of Congo's independence -- says his protest will go on, well beyond that date.

"If we remove statues, we are not removing history," he said. "Normally we get history from school, books and from family. It is not statutes that should educate."

The Leopold II statue opposite the Royal Palace was covered in anti-racist graffiti earlier this month. Local authorities cleaned it, only for another slogan to appear shortly afterwards: "Stop Cleaning, Start Reflecting."