Why two Toronto children are urging Canadians to #ChalkYourSidewalk

If you're walking around downtown Toronto this week, you may notice some sidewalk-chalk art sending a political message to the Canadian government.

A campaign hit Canadian streets on Monday asking children to #ChalkYourSidewalk in support of government aid to countries with extreme poverty.

The #ChalkYourSidewalk campaign is a way of demonstrating to children and youth how to be involved in social activism, said siblings Mercy and Ephraim Hildebrand on CTV's Canada AM. The two are the children of Millennium Kids founder and director Sara Hildebrand, a non-profit foundation that started the campaign and asks millennial children to encourage the Canadian government to reach its development goals.

Millennium Kids asked families to meet on July 13 at Toronto Coliseum, Nathan Phillips Square and Yonge-Dundas Square to create street art in support of increasing aid to 0.7 per cent of gross national income, and ending extreme poverty by 2030. 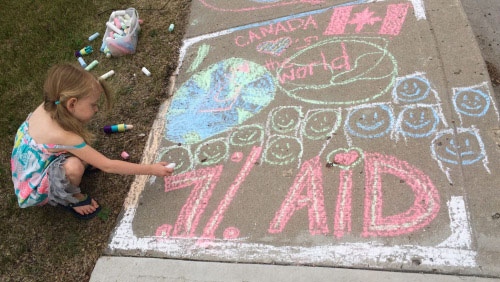 A girl from Regina draws on the sidewalk with chalk in support of the #ChalkYourSidewalk campaign. (Millennium Kids / Tumblr)

The campaign coincides with the first day of the Third International Conference on Financing for Development in Ethiopia. World leaders -- including Canada's Minister of International Development -- are attending the event which focuses on the progress UN countries have made, and what future goals need to be addressed. Conferences similar to this one should inspire children to be involved, Mercy said.

"The age for voting is the age of 18, but I do believe that youth and children can have a voice," she said.

Children can learn where their passions lie by reading the newspaper, researching organizations and asking questions, Mercy said. Children can then show adults what matters to them by addressing parliament or town council, she said.

"Please don’t give up," Ephraim told the council. "You are leading Toronto on an important journey to justice. We can do this together."