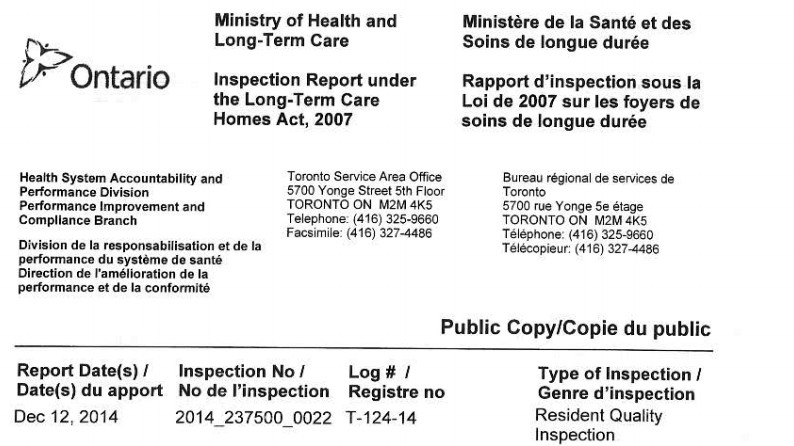 While researching "In the dark," W5 tried to ascertain the number of sexual assaults reported in Ontario’s nursing homes in a given year.

While researching "In the dark," W5 tried to ascertain the number of sexual assaults reported in Ontario’s nursing homes in a given year.

The Ministry of Health and Long-Term Care reported 1,967 "suspected or actual incidents of resident-to-resident abuse" in 2014. But the ministry does not break down that number according to various abuse categories (emotional, financial, physical, sexual and verbal).

“All incidents are triaged based on the individual circumstances of the case,” a ministry spokesperson explained in an email.

After learning that no provincial statistics are kept on sexual abuse in Ontario’s nursing homes, we decided to compile our own.

Using Ontario’s online inspection Reports on Long-Term Care Homes, we downloaded all the reports for the homes included on the website for 2014, the last full year available.  Of the 650 homes listed, 35 did not have any inspection reports available for 2014.

Six hundred and fifteen homes yielded 2,637 inspection reports. We converted all of them to searchable text and found some mention of “sex” in 45 homes. Upon further examination we discovered 103 reported incidents of sexual assault in 37 Ontario nursing homes. That number may be higher, because some reports do not divulge the precise number of incidents.

The reports also show a varied reporting culture on the parts of nursing homes and ministry inspectors. Some of the findings that stood outinclude:

Under Ontario regulations, nursing homes are required to notify the police whenever an incident of suspected sexual abuse is reported. Reports for only 12 of these 37 homes mention police at all, most often in the context of failing to inform police in a timely manner.

To see the report for each incident, click on the 'Report Date'