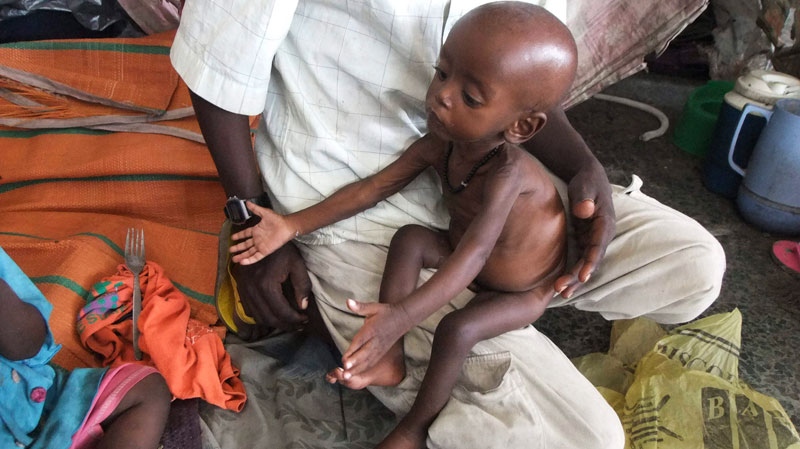 A malnourished child from southern Somalia sits on his fathers lap at a camp in Mogadishu, Somalia, Wednesday, Aug 3, 2011. (AP / Farah Abdi Warsameh)

NAIROBI, Kenya - The UN declared three new regions in Somalia famine zones on Wednesday, expanding the area where the highest rates of malnutrition and mortality are taking place, including the refugee camps in the capital of Mogadishu.

The UN's food arm said that famine is likely to spread across all regions of Somalia's south in the next four to six weeks. Famine conditions are likely to persist until December, the Food and Agriculture Organization said.

Across Somalia, 3.7 million people are in crisis, the UN says, out of a population of 7.5 million. The UN says 3.2 million are in need of immediate, lifesaving assistance.

The UN said the prevalence of acute malnutrition and rates of crude mortality surpassed the famine thresholds in areas of Middle Shabelle, the Afgoye corridor refugee settlement and internally displaced communities in Mogadishu. The UN last month said two regions in Somalia were suffering from famine.

Somalia is suffering its worst drought in 60 years. Getting aid to the country has been difficult because al Qaeda-linked militants control much of the country's most desperate areas.

"Despite increased attention in recent weeks, current humanitarian response remains inadequate, due in part to ongoing access restrictions and difficulties in scaling up emergency assistance programs, as well as funding gaps," the UN's Food Security and Nutrition Analysis Unit said.

Earlier on Wednesday, an official with the African Union said a donor conference to raise money for Somalia famine victims has been postponed for at least two weeks. A conference had been scheduled for next Tuesday to bring together African leaders and international organizations to address the drought crisis.

But Valerie Vencatachellum, a senior policy adviser at the Ethiopia-based African Union, said Wednesday that next week's conference was not scheduled with enough advance notice. Vencatachellum said it would be delayed at least two weeks so heads of state can attend.

The Horn of Africa is suffering a devastating drought that has been compounded by conflict in Somalia, bad governance and spiraling food prices. Tens of thousands of people have already died, and tens of thousands more have fled Somalia in hopes of finding food aid at refugee camps in Kenya and Ethiopia.