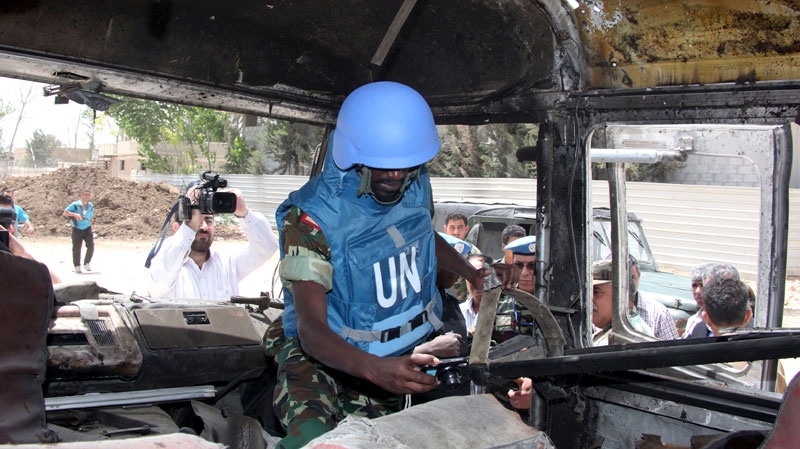 DAMASCUS, Syria - Syria's oil minister acknowledged the heavy toll international sanctions have taken on the country's oil sector, saying Wednesday that they had sucked about US$4 billion from the economy.

Sufian Allaw said the sanctions levied by the United States and the European Union to put pressure on President Bashar Assad were to blame for the shortages that have left Syrians across the country standing in long lines to pay inflated prices for cooking gas and other products.

Allaw's comments are part of a delicate rhetorical balancing act by the Damascus regime 15 months into the crisis that has posed the biggest threat to Assad family rule in four decades. The regime must acknowledge that international measures are squeezing the populace while denying that Assad's control of the country is in any way shaken.

Before the Syrian uprising began in March 2011, the oil sector was a pillar of Syria's economy, with oil exports - mostly to Europe - bringing in $7-8 million per day, according to David Schenker of the Washington Institute for Near East Policy. This income was key to maintaining the $17 billion in foreign reserves that the government had at the start of the uprising.

Prices for a tank of cooking gas have more than quadrupled as shortages have spread across the country, and Allaw said Syria's gas production covers only half of the country's needs.

To fill the gap, officials are seeking imports from countries not party to the sanctions. A Venezuelan tanker carrying 35,000 tons of fuel docked in Syria on Tuesday, Allaw said. Another is supposed to follow.

He said officials were seeking to arrange further gas imports from Algeria and Iran.

Syria's uprising began with mostly peaceful calls for reform, but the government's brutal crackdown on dissent led many in the opposition to take up arms.

The UN estimates more than 9,000 people have been killed, most of them civilians.

Violence in Syria also has spilled over into neighboring Lebanon, and Russia warned on Wednesday that greater violence in Syria's neighbor to the west was "a tangible threat" that "could end very badly."

Syria and Lebanon share a complex web of political and sectarian ties and rivalries, often causing events on one side of the border to echo on the other.

The arrest earlier this month of an outspoken Lebanese critic of Syria led to gunbattles in the northern Lebanese city of Tripoli that killed at least eight people and injured many more.

Lebanon's Foreign Minister Adnan Mansour said Wednesday that authorities located the captives and that he expects they will be released soon.

Mansour said he had been in touch with a number of Arab officials and his Turkish counterpart to try to secure the captives' return to Lebanon, according to Lebanon's state news agency.

He said "an important Arab official" had told him where the captives are, but he did not provide further information on their location or who is holding them.

Syria's state news agency blamed rebels for the kidnapping. It said the Lebanese group was on its way home from a religious pilgrimage in Iran when rebels intercepted their vehicles and abducted the 11 men and their Syrian driver.

World powers have pinned their hopes on a peace plan to end Syria's conflict brokered by international envoy Kofi Annan that calls for a cease-fire by all sides to allow for dialogue on a political solution.

But that plan is under strain. A cease-fire between government troops and rebels that was supposed to start last month has never really taken hold.

A bomb planted under a military bus exploded Wednesday near the Damascus airport, killing one soldier and wounding 23 others, a military official at the site said on condition of anonymity under army rules.

Anti-regime activist reported government rocket attacks on parts of the central city of Homs and clashes between rebels and government troops in the central town of Rastan, outside of Damascus and elsewhere.

The prospects for talks between the regime and those seeking to topple it appear as distant as ever. President Bashar Assad's government has never acknowledged popular calls for reform in the country and dismisses the opposition as "armed terrorists."

For their part, opposition leaders say the regime has killed too many civilians to play a role in the conflict's solution.