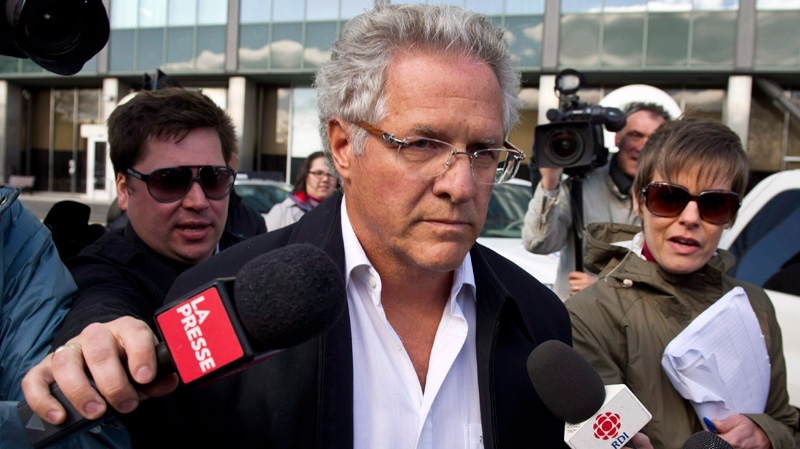 Quebec construction magnate Tony Accurso leaves the Quebec Provincial Police headquarters after being arrested for charges of fraud along with 13 others in Montreal, Tuesday, April 17, 2012. (Paul Chiasson / THE CANADIAN PRESS)

MONTREAL - Some of the public money set aside for Canada's economic recovery has ended up in the hands of companies and individuals accused of taking part in an elaborate collusion scheme in Quebec.

These include companies owned by construction entrepeneurs Tony Accurso and Lino Zambito, both of whom are facing a long series of charges. Money also went to BPR and Transport and Excavation Mascouche (TAM) -- two companies charged with fraud and conspiracy.

Word of their success in obtaining stimulus funding comes after a Canadian Press report last week that many individuals facing charges for improper activity at the municipal level have ties to federal parties through political donations.

Despite the flurry of allegations in recent years about corruption in Quebec's construction industry, the federal government has repeatedly dismissed the idea that it should adopt special safeguards for its historic stimulus program. It has noted that municipal tendering rules are generally a provincial responsibility.

There appeared to be a fleeting shift in the government's position after news of the three contracts.

At around 11 a.m. Public Works Minister Rona Ambrose tweeted: "Maybe its (sic) time to rethink the 'no strings attached' funding model demanded by Quebec. Will Quebec prosecute these companies?" The tweet had been deleted by late afternoon, while a government spokesperson reiterated its initial line.

In response to the report, the NDP called on the Conservatives to take more responsibility for how public money is spent.

"You can't take credit for investments and job creation without taking responsibility for mismanagement and lax oversight," said Mathieu Ravignat, the Opposition's Treasury Board critic. "You can't have it both ways."

Fifteen people have since been arrested in connection with alleged illegal payments during the construction of water-treatment plants shared by Terrebonne and its neighbour, Mascouche. A separate police roundup in 2011 also saw seven people charged for allegedly taking part in a kickback system in Boisbriand.

The criminal charges are for projects unrelated to the stimulus program; there has never been any accusation of wrongdoing against any company over its involvement in that federally funded effort.

There is, however, considerable overlap between the alleged members of the collusion ring and those who carried out infrastructure work under one of several federal-provincial stimulus funds in Quebec, known under its French acronym, PRECO.

Under that PRECO program, Ottawa transferred $350 million to Quebec, which pitched in the same amount and made the money available to municipalities for water-related infrastructure.

Municipalities ultimately decided who got the work -- not Ottawa.

The Conservative government took pains to point that out two years ago, when first asked about reports of corruption scandals in Quebec involving political parties, construction companies and the Mafia.

At the time, then-public safety minister Peter Van Loan was among those who stressed that oversight of municipal contracts was not generally a federal responsibility.

The Government of Canada continues to keep its distance from such questions. The Tories' Quebec lieutenant, Christian Paradis, has repeatedly said the 2006 Accountability Act provides sufficient protection against the mismanagement of federal funds.

"Of course we pay attention to what's going on there," Paradis said after the most recent round of arrest last month, which nabbed Accurso and more than a dozen others.

"We have very severe measures that we put in place to make sure we have a transparent process and honest way to proceed."

The PRECO program was designed to finance upgrades to municipal water systems, a sector of the construction industry that has come under particular scrutiny from Quebec authorities.

The minutes of a town-council meeting in Terrebonne, a bedroom community north of Montreal, show that engineering firm Leroux, Beaudoin, Hurens & Associes (LBHA) was awarded a $701,250 contract in April of 2010 to design and oversee PRECO-funded work on the city's water system.

At a meeting in June of that year, Terrebonne's council voted to follow LBHA's recommendation and gave a $1.9 million contract to conduct part of the work to TAM.

The president of LBHA, Jean Leroux, was charged last month with fraud and conspiracy, among other things, for his alleged role in a water-plant scheme in neighbouring Mascouche.

He is charged with fraud, conspiracy, breach of trust, influencing a municipal official and fraud against government, under an alleged system of kickbacks.

Leroux is among many construction-industry officials active in funding political parties at various levels. At the federal level, he donated $480 to the Bloc Quebecois between 2008 and 2009 and then donated $666.66 to the Conservative party in 2009.

Along with charges TAM faces as a company, two employees have also been charged over their alleged role in the Mascouche affair.

In Laval, there has been no accusation of wrongdoing in relation to municipal contracts. But the large suburb, home to Accurso's construction empire, did see a police raid last month.

Accurso's extensive network of construction companies has long dominated the market for infrastructure contracts both in and around the Montreal area.

During a Sept. 8, 2010, executive-council meeting in Laval, a resolution was passed unanimously ordering engineering firm MLC Associes to give PRECO-funded work to Accurso's Louisbourg SBC.

In July 2010, Louisbourg SBC won a string of contracts worth more than $6 million to repair water systems in Laval. The city funded the projects, in part, with money it received from PRECO.

The company plays a key role within Accurso's holdings -- it allows him to stay in the construction game even though other parts of his empire have been stripped of their Quebec construction licenses.

Constructions Louisbourg Ltd. and Simard-Beaudry Construction Inc. have temporarily lost their ability to perform construction work in the province after pleading guilty to tax evasion in 2010.

Accurso himself faces six charges related to the alleged collusion in Mascouche: fraud, conspiracy, influence-peddling, breach of trust and two counts of defrauding the government.

PRECO was not the only federal program where cash went to alleged participants in the collusion scheme.

Under the Building Canada Fund, the town of Boisbriand received $1.6 million from Ottawa in 2009 to upgrade its water system. Quebec and Boisbriand each contributed similar amounts, for a total of almost $5 million.

Boisbriand hired a BPR division, BPR-Triax, to design and oversee the work. In the original call for tenders, the construction company Infrabec finished second in the biding with a $5.7 million proposal.

That call for tenders was cancelled. BPR recommended to Boisbriand's town council that it reject all eight bids and hold a new competition.

When the results of the new competition were announced on Sept. 1, 2009, Infrabec finished first with the lowest bid of $4.1 million. BPR's recommendation that the contract be awarded to Infrabec was immediately adopted by the council.

Infrabec went bankrupt last year after two directors, Lino and Giuseppe Zambito, were arrested on fraud charges amid allegations of a widespread collusion scheme in Boisbriand.

Among the people arrested with them were Sylvie St-Jean, the city's former mayor, as well as an employee at BPR, Claude Briere, as police described a system of kickbacks and illegal political contributions.

In the buildup to the announcement of a public inquiry in Quebec, opposition parties pressured the Charest government by revealing that many dozens of people working at the same companies in the construction industry had made political donations.

They accused the provincial Liberals of flouting the spirit -- and in some cases the letter -- of fundraising laws that forbid corporate donations.

Under intense pressure, the Charest Liberals eventually called an inquiry. That probe will examine the industry's alleged ties to organized crime, collusion tactics, and involvement with political parties.

With the inquiry to get underway next week, the NDP is seeking assurances the government will co-operate with the proceedings.

Lawyers for the inquiry have already turned to the courts to force a reluctant RCMP to hand over its files from related Mafia investigations.

"It is very important for the Conservative government, and the RCMP, to co-operate fully with the Charbonneau commission," Ravignat said. He added that he felt it "appropriate" for the government to direct the Mounties to be more co-operative with the inquiry in the future.

In the spring of 2009, as the federal stimulus program was being rolled out, numerous BPR employees donated to the governing Conservatives. The Canadian Press identified 19 different employees making donations on a single day that year.

A BPR spokesperson has said such political donations are "personal and voluntary actions," governed by the law and by the company's code of ethics.

Those contributions helped a riding where the Tories had little chance of winning (Laurier-Sainte-Marie, where they finished fifth in the 2008 election) become a fundraising juggernaut, raking in more than $288,000 in donations in 2009.

That riding association then transferred $30,000 to Paradis' riding of Megantic-L'Erable. Paradis was minister of public works at the time and the senior minister responsible for Quebec.