Remembering the Original 9, the pioneers of women's tennis 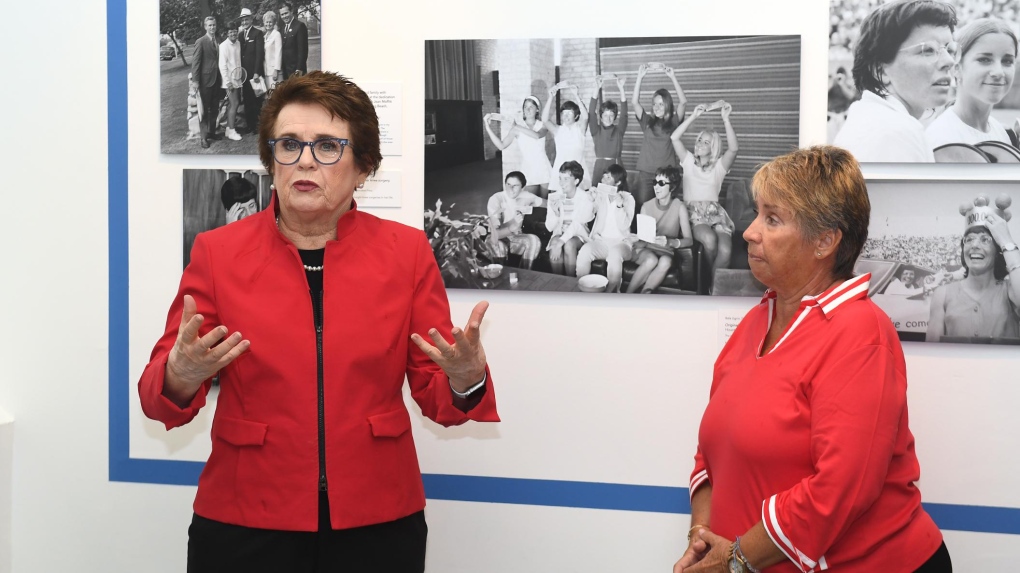 Billie Jean King (left) and Rosie Casals stand in front of a photo of the members of the Original 9 holding one dollar notes. (Emilee Chinn/Getty Images North America/Getty Images/CNN)

As Naomi Osaka lay down in the centre of Arthur Ashe Stadium, her third grand slam title secured, it offered a moment to reflect on a momentous fortnight, one that saw her return to her fluid best on the court while lending her voice to the fight against racial injustice.

For some of the founding figures of modern tennis, it also offered a chance to reflect on how far the sport has come over the past 50 years.

Osaka became the highest paid female athlete in history after earning US$37.4 million over the last year, according to Forbes -- a far cry from September 1970 when a group of nine women symbolically signed one dollar contracts, establishing the first women's professional tennis tournament, in the hope of achieving the same level of recognition enjoyed by their male counterparts.

"The reason that these women are making all this money today and we have equal prize money in the majors is because of that moment where we signed our one dollar contracts," Billie Jean King, a member of the Original 9 and a vociferous campaigner for equal rights, tells CNN Sport's Don Riddell.

"We created a platform, a global platform ... I think we are leaders in women's sports and I'm really proud of that."

The story goes that a group of nine players, including King, enlisted the help of Gladys Heldman, the publisher of World Tennis magazine, to help organize a boycott of the Pacific Southwest Championships that carried a prize purse weighted 12:1 in favor of the men's draw.

With the support of Heldman, a rival tournament, the Houston Women's Invitational, was staged and financial backing for a breakaway women's tour followed.

Sponsorship was secured through American cigarette and tobacco company Philip Morris, and from there the Virginia Slims Circuit was born. The inaugural season got underway in January 1971.

"We were suspended (from the main circuit)," Casals recalls to CNN Sport, "we were ostracized by the other players, so it was something that was very meaningful to each of us individually.

Casals remembers how players had to lay down court lines ahead of a Virginia Slims tournament in Long Beach, California, and King jokingly agrees they were "very versatile" -- far more than just tennis players.

"We would drive to newspapers and to editors, we'd plead with them, we'd stop cars in the streets and give out tickets," says the 12-time grand slam winner. "We signed every autograph until nobody was left."

What motivated the Original 9 was a shared vision for the future of their sport.

"Number one, that any girl born in the world, if she was good enough, would have a place to compete," says King.

"Number two, that we'd finally be appreciated for our accomplishments, not only our looks.

"And number three, to be able to make a living. And those were our dreams for the future generations and for ours."

Progress came with time. In 1973, the Virginia Slims Circuit became the Women's Tennis Association, which in 1994 would become the current version of the WTA Tour, and King also faced -- and beat -- Bobby Riggs in the famous "Battle of the Sexes" match.

1973 was also the year the U.S. Open offered equal prize money to men and women, although women had to wait until 2007 until all four grand slam tournaments offered equal pay,

King thinks, however, that had the Original 9 not broken from the status quo, then the majors would still be offering pay disparities today.

"I think we would be maybe 20 years behind the times," Casals says in agreement. "We certainly would not be enjoying what we're enjoying now."

The generation after the Original 9 saw the arrival of Chris Evert and Martina Navratilova, each of whom won 18 grand slam singles titles. The pair met 22 times at majors, Navratilova winning 14 times and Evert eight, as they contested arguably the greatest rivalry tennis has seen.

When it comes to today's players, Casals notes how they are "not involved in the politics of the game (like) we were," but adds that the likes of Osaka and Coco Gauff -- both of whom have raised tennis' voice amid the Black Lives Matter movement -- could change that.

"There's a legacy that needs to be left by every generation," she says.

And 50 years since the formation of the Virginia Slims Circuit -- the birthplace of women's tennis -- current players can salute the legacy of the Original 9.

"I'd like to think that maybe other women along the way would have done the same thing, but the point is, you took the biggest leap, you did it first, and your generation has inspired mine to continue fighting and striving for change," 2019 US Open champion Bianca Andreescu recently wrote in an open letter to the Original 9.

In terms of earning potential, there's still a wide gap between men's and women's sport. Osaka and Serena Williams were the only two female athletes in Forbes' most recent list of the world's 100 highest-paid athletes, while only Williams made the list the year before.

King's influence in the sport was recognized last week when the Fed Cup was renamed the Billie Jean King Cup -- the first time a global team competition has been named after a woman -- and she acknowledged in the press conference where the announcement was made that we are "not even close to equality in this world" -- even though tennis leads the way when it comes to women's sport.

Yet she can't help but look on at the likes of Osaka -- who received $3 million as she won her second U.S. Open triumph -- with pride.

"When I see them getting big checks and winning matches and seeing all the attention they get, then our dreams have come true," King says.

"They're living our dreams. And I love it."