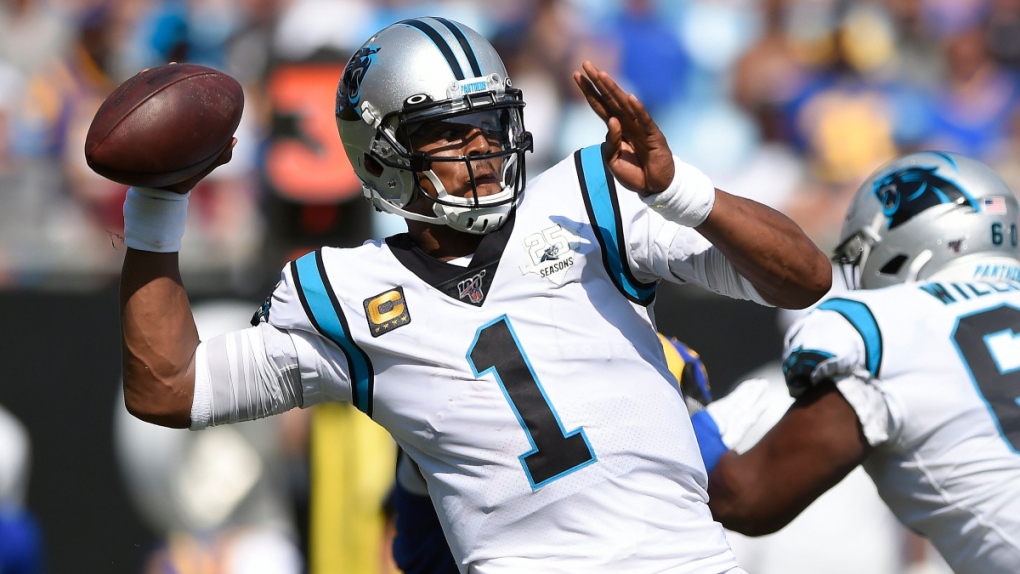 BOSTON -- The New England Patriots have reached an agreement with free-agent quarterback Cam Newton, bringing in the 2015 NFL Most Valuable Player to help the team move on from three-time MVP Tom Brady, a person with knowledge of the deal told The Associated Press.

The one-year deal is worth up to $7.5 million with incentives, the person said, speaking on the condition of anonymity because he was not authorized to discuss it publicly. A Patriots spokesman said the team had nothing to announce Sunday night. The signing was first reported by ESPN.

"I'm as excited as I don't know what right now!!" Newton posted on Instagram. "All praise to God!! Dropping content tomorrow!! I hope you're ready!! Let'sgoPats."

The Patriots had been heading to training camp with 2019 fourth-round draft choice Jarrett Stidham as the heir apparent to Brady, who led the team to six Super Bowl championships since 2001 but signed with Tampa Bay this off-season. Stidham appeared in three games last season, completing two passes for 14 yards with one interception.

The only other experienced quarterback on the defending AFC East champions' roster was 34-year-old Brian Hoyer, who has started 38 games in an 11-year career with seven NFL teams, including the Patriots twice.

A three-time Pro Bowl selection who was the league's top player in 2015, Newton remains the NFL's all-time leader in touchdowns rushing by a quarterback. He had one year remaining on a five-year, $103.8 million contract, but the Panthers saved $19.1 million under the salary cap by releasing him on March 24.

The 31-year-old Newton was the No. 1 overall pick in the 2011 draft after leading Auburn to a national championship and winning the Heisman Trophy. He helped the Panthers reach the playoffs four times, including the Super Bowl in 2015.

The Panthers finished 15-1 that season and Newton won league MVP honours after throwing for 3,837 and 35 touchdowns and rushing for 636 yards and 10 TDs. But he was criticized after Carolina's 24-10 loss to the Denver Broncos in the Super Bowl for not jumping on a loose ball late in the game and cutting his postgame news conference short.

After missing the post-season in 2016, the Panthers returned after going 11-5 the next year, losing to the New Orleans Saints in the wild-card round. More problematic, a shoulder injury severely hampered his throwing in 2018; after starting 6-2, the Panthers lost their next seven games.

Newton had surgery to repair a torn rotator cuff before the 2019 season. But he injured his foot in a brief appearance in the third preseason game against New England; he played only two games last season before being placed on injured reserve with a broken bone in his foot.

Newton has been rehabbing ever since, posting several workout videos on Instagram. But because of the new coronavirus, he hasn't had a chance to meet with other teams to show he's healthy.