On and off the court, Kawhi Leonard had a memorable season in Toronto 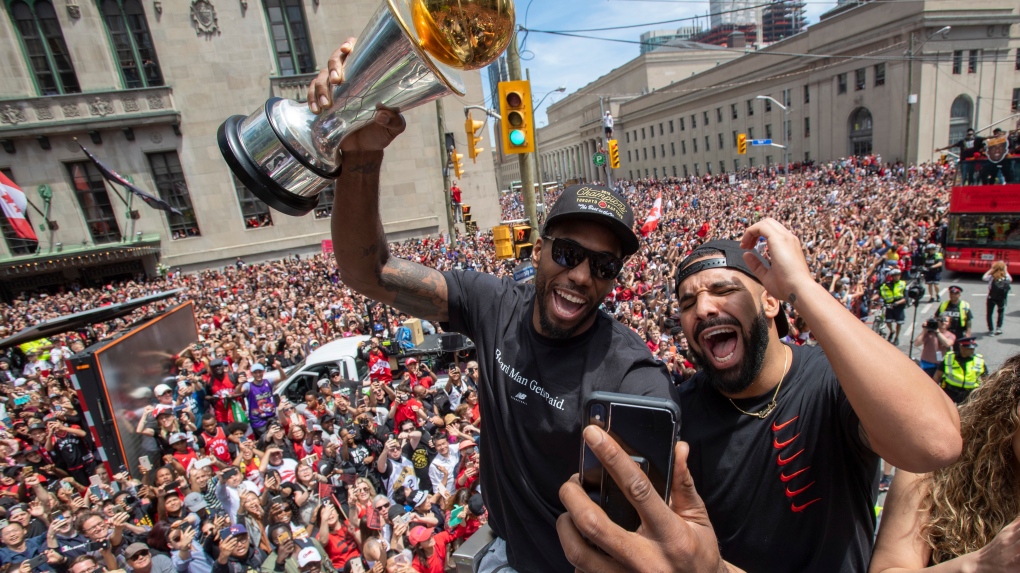 TORONTO -- Kawhi Leonard's short but memorable time with the Raptors will be remembered Wednesday when he receives his championship ring before Toronto takes on his current team, the Los Angeles Clippers, at Scotiabank Arena. Here are a few of his contributions on and off the court to the Raptors 2018-19 championship run:

Leonard caused a social media sensation at his introductory Raptors press conference, where his deadpan statement that he was a "fun guy" and his robotic laugh quickly went viral as Internet memes. Athletic apparel company New Balance even turned his inadvertent "fun guy" catchphrase into a popular advertising campaign. Leonard had the last laugh, literally, when the Finals MVP closed the Raptors championship parade with a tongue-in-cheek rendition of his guffaw.

Leonard comes by his nickname "The Klaw" honestly. His huge hands are like a golden eagle's talons and are a trademark element of his elite defence. Raptors fans saw plenty of that, with Leonard averaging 1.8 steals and 7.3 rebounds per game in the regular season and 1.7 steals and 9.1 rebounds per game in the playoffs. Those numbers don't count the numerous deflections and shot alterations that made Leonard so tough to play against. However, those big paws were not made for fist-bumps, as Norman Powell found out when a laser-focused Leonard left him hanging as the Raptors were walking out onto the Oracle Arena floor for Game 3 of the Finals.

Leonard's strength and athleticism make him a slam-dunk threat regardless of which opposition is guarding him. Or how many, for that matter. Fittingly, some of Leonard's most memorable dunks came in the playoffs. His power slam over Tobias Harris and James Ennis III in Toronto's second-round Game 5 win over Philadelphia might have been the top candidate, had it not been for his dunk on league MVP Giannis Antetokounmpo in the decisive Game 6 of Toronto's Eastern Conference final against Milwaukee.

Leonard's series-winning shot that led the Raptors into the Eastern Conference final instantly became one on Toronto's most iconic sports moment. It wasn't just that it went in, it was also how. With Game 7 of the series tied 90-90, Leonard launched a high-arcing shot at the regulation buzzer over Philadelphia big man Joel Embiid that took four bounces off the rim before falling through the hoop. The initial bounce was so high that Leonard had time to squat in front of the Raptors bench and watch his shot eventually count. The basket has been immortalized on T-shirts, in paintings and with a Lego display.

Leonard's tenure in Toronto ended on a ridiculous note. When news broke that Leonard, who recently became a free agent, was in Toronto, a crowd of people staked out the hotel he was rumoured to be heading to as a news helicopter tailed a black van that may or may not have had Leonard in it. The scene, like a low-rent version of the O.J. Simpson white Bronco chase, came despite a bizarre press conference days earlier in which Toronto Mayor John Tory and Raptors "superfan" Nav Bhatia pleaded with Torontonians to give Leonard his space. Leonard signed with his hometown Clippers shortly after.