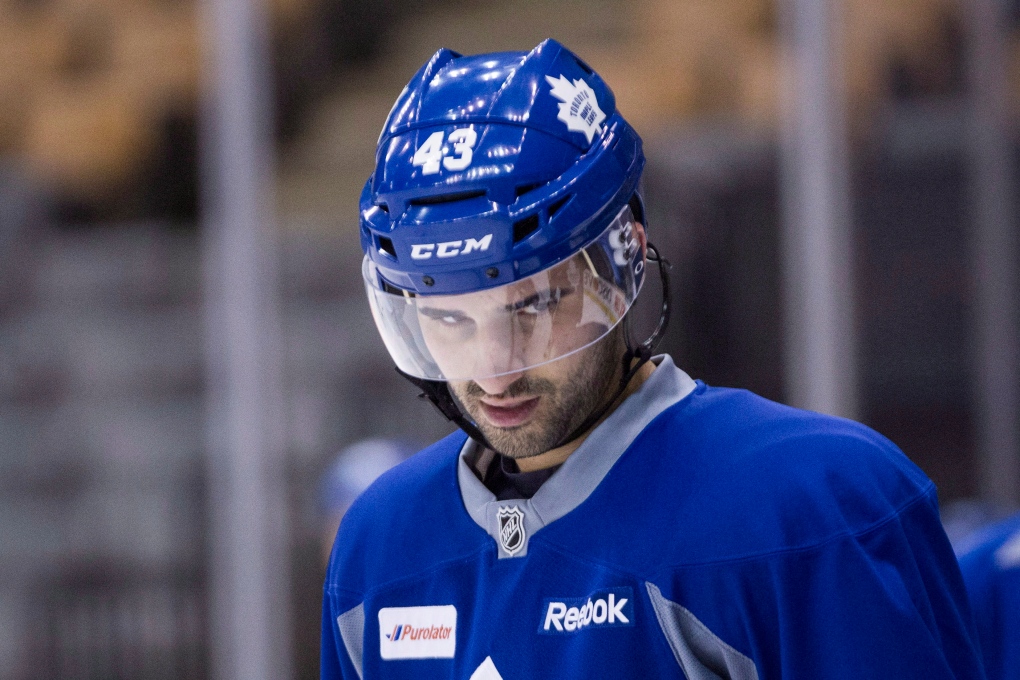 Toronto Maple Leafs' Nazem Kadri takes to the ice for a practice session at the Air Canada Centre in Toronto on Saturday May 11, 2013 ahead of their Stanley Cup playoff game 6 against the Boston Bruins. (Chris Young / THE CANADIAN PRESS)

TORONTO -- Nazem Kadri was relieved to have a new deal, and that emotion extended to his Toronto Maple Leafs teammates who won't have to answer questions about his status.

"They are glad it's over," Kadri said. "I'm sure they'll take me out for a nice dinner on me."

Fresh off signing a US$5.8-million, two-year contract, the restricted free-agent centre was all smiles and ready to move past the summer squabbling as he reported to training camp. But with defenceman Cody Franson unsigned and no extensions yet for captain Dion Phaneuf and star Phil Kessel, the Maple Leafs still face plenty of contract questions.

The most pressing situation is that of Franson, the only one of the 59 players invited to camp who did not report.

"My deal's out of the way now, and hopefully Franny and his agent could come together and come to terms because he's a big piece of our team," Kadri said. "I know everyone wants him back and I know he wants to be back. It's just a matter of when."

Judging by what general manager Dave Nonis had to say Wednesday, it could be a while unless the 26-year-old blue-liner moves closer to the Maple Leafs' negotiating position like Kadri did. Nonis said the team wasn't prepared to change its stance on Kadri, crediting him for wanting to be there for the first day of camp.

Now the pressure is on Franson.

"We've made him an offer that we want him to take," Nonis said. "He's declined to take it. At this point, we're going to move ahead with the players we have here in camp."

It's not personal, but the Maple Leafs only have between $2 million and $3 million of salary-cap space to work with, and that could put a squeeze on Franson.

"There's realities about where you are," Nonis said. "We have 'X' amount of cap space. We have players who are going to try to make this team that may eat up some of that. There's only so much we have to get a deal done. I understand his position, he doesn't think this is fair. We want him signed. We want to have Cody at camp. But he's not here."

Kadri is in camp on a deal that will make him prove 44 points in a lockout-shortened 48-game season wasn't a fluke. He called it "fair for both sides," as his coach emphasized the importance of every player being in camp.

"The 48 games he played with us last year was a start, but you wouldn't consider him a veteran guy when his next NHL game is his 100th game," Randy Carlyle said. "He's a talented young player, and we feel fortunate to have him."

The Maple Leafs are fortunate to have Kessel and Phaneuf, too, though each player's future is uncertain as he goes into the final year of his contract. Kessel doesn't want to negotiate during the season, so management and agent Wade Arnott have a limited amount of time to negotiate an extension as training camp progresses.

Kessel would prefer a "longer-term extension" because he'd like to be somewhere for a long period of time. Other than that, he wasn't expansive about contract talks other than to say the Maple Leafs hadn't approached him in the off-season.

"I'm not too worried about it," Kessel said. "I got one year left here, and we'll see what happens."

The same goes for Phaneuf, the Maple Leafs' No. 1 defenceman and captain who has expressed a desire to stick around.

"I know it will be an important topic, but we're going to keep all that in house," Nonis said. "If and when we start negotiations with those players, it will be behind closed doors."

Yet it will be an ongoing topic of conversation in this hockey-mad city until something gets done, just like with Kadri. The difference is, if Kessel isn't signed by the start of the regular season, the Maple Leafs will be playing meaningful games as he tries to put up the first 40-goal season of his NHL career.

Centre Tyler Bozak had 12 goals and 16 assists last season before going to unrestricted free agency and ultimately re-signing with the Maple Leafs for five years and $21 million. He insisted he never considered leaving.

"My No. 1 plan was to stay here, and throughout the whole process we were trying to figure out a contract that worked and find the right amount," Bozak said. "Luckily enough we were able to agree on something."

It might not be so easy for the Maple Leafs with Kessel if the situation gets to June or July. But Nonis brushed off concern about that scenario.

"If he wants to play here, and if we want to have him, I believe we end up finding a way to make a deal."

That's what happened with Kadri, even though it took until 12 hours before players were set to show up at camp. Perhaps a deal could have been worked out sooner, but he and the Maple Leafs have bigger things to concern themselves with.

"You can feel like it's dragging on a little bit, but there's a purpose for everything and it's not like we did this for no particular reason," Kadri said. "I'm very relieved that I have a contract and that I'm employed now, so we can just start worrying about the more important things and get this season going."