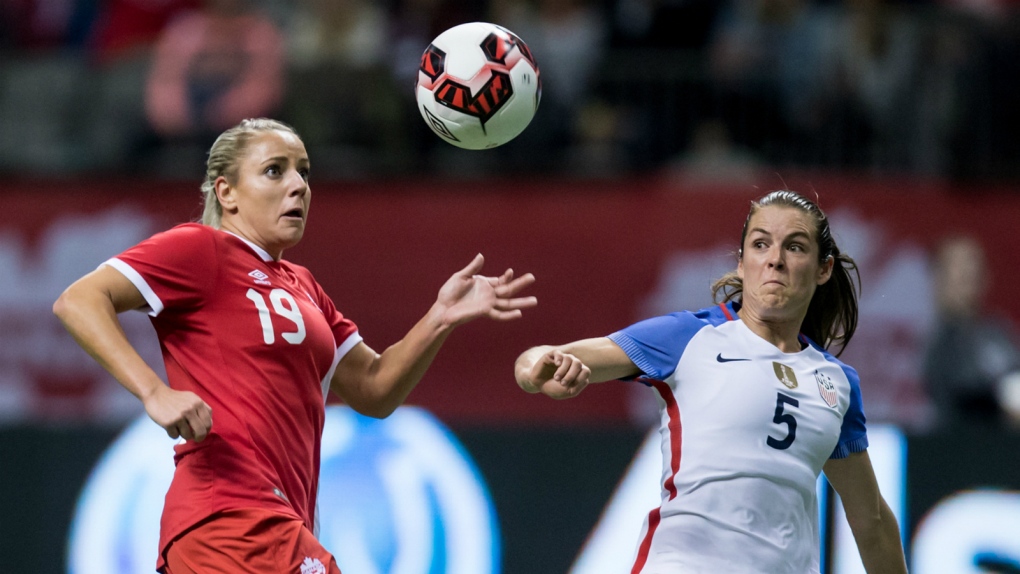 VANCOUVER - Adriana Leon scored in the second half as Canada tied the United States 1-1 in an international women's soccer friendly on Thursday night.

Alex Morgan replied for the U.S.

The game at B.C. Place Stadium was the opener of a two-game series between the top-ranked Americans and No. 5 Canada, with the rematch set for Sunday in San Jose, Calif.

Down 1-0 after the first half, Canada equalized in the 57th minute when Leon, who subbed in for fellow striker Deanne Rose, finished off a wild sequence following a corner.

Canadian defender Rebecca Quinn rattled the crossbar with her shot, and the ball fell to Christine Sinclair, who hooked it towards goal for Leon to help over the line.

The goal that sent the crowd of 28,017 into a frenzy was the Mississauga, Ont., native's eighth for her country in her 43rd appearance.

Morgan opened the scoring in the 31st minute when the forward jumped on a ball played into the Canadian area before slotting home between three defenders for the 79th goal of her international career.

The U.S. came close to retaking the lead after Leon levelled when Megan Rapinoe saw her deflected shot saved by Canadian goalkeeper Stephanie Labbe in the 65th minute.

Leon then fired from distance in 71st, but her shot just fizzled over the top of U.S. 'keeper Alyssa Naeher's goal.

Morgan had a shot blocked from in tight by a defender five minutes later at the other end.

Canadian substitute Maegan Kelly, who made her first appearance for the national team, nearly won it in the 84th, but Naeher got a piece of a chipped effort that hit the base of the post and stayed out before a defender cleared the danger for the game's last clear-cut chance.

The Americans came in with fond memories of B.C. Place, the venue where they won their third World Cup with a with a 5-2 victory over Japan before a crowd 53,341 on July 5, 2015.

The U.S. has also won four Olympic gold medals, but were upset in the quarter-finals of the 2016 Rio Games by Sweden.

Canada, meanwhile, has won bronze at the last two Olympics.

The U.S. had the game's first chance in the 11th minute when Rapinoe fired a shot beyond Labbe that hit the inside of the far post and stayed out.

After Morgan gave the visitors the lead, Canada started to show more bravery going forward, with Sinclair, who made her 260th appearance, just missing a header on a dangerous cross.

The 34-year-old Sinclair then had a chance with Naeher out of position moments later, but defender Kelley O'Hara was there for a crucial block.

Labbe had to be sharp in the 39th minute, palming a Lindsey Horan free kick from 30 yards out over the bar to keep the Canadians within one.

The hosts had one more chance in the half off a corner, but Quinn failed to make good connection on a header in the 44th.

The Canadians called up a number of youngsters because the games against the U.S. fall outside the international window, meaning European-based players like Kadeisha Buchanan, Erin McLeod and Sophie Schmidt weren't available.

But Paris Saint Germain midfielder Ashley Lawrence, who won bronze for Canada at the 2016 Olympics, was added to Canadian roster this week and started in midfield.

Canada and the U.S. last played in Vancouver in the championship game of the 2012 CONCACAF Olympic qualifying tournament, which the Americans won handily 4-0.

The rivals then faced off in an epic Olympic semifinal in Manchester, England, some six months later in a match where the U.S. won 4-3 after extra time despite Sinclair's memorable hat trick.

Notes: Canada honoured former national team members Brittany Baxter Timko, Chelsea Stewart and Kelly Parker at halftime. The trio were part of the team that won Olympic bronze in 2012. ... U.S. striker Tobin Heath was dropped from her country's roster for the two-game series because of an ankle injury.