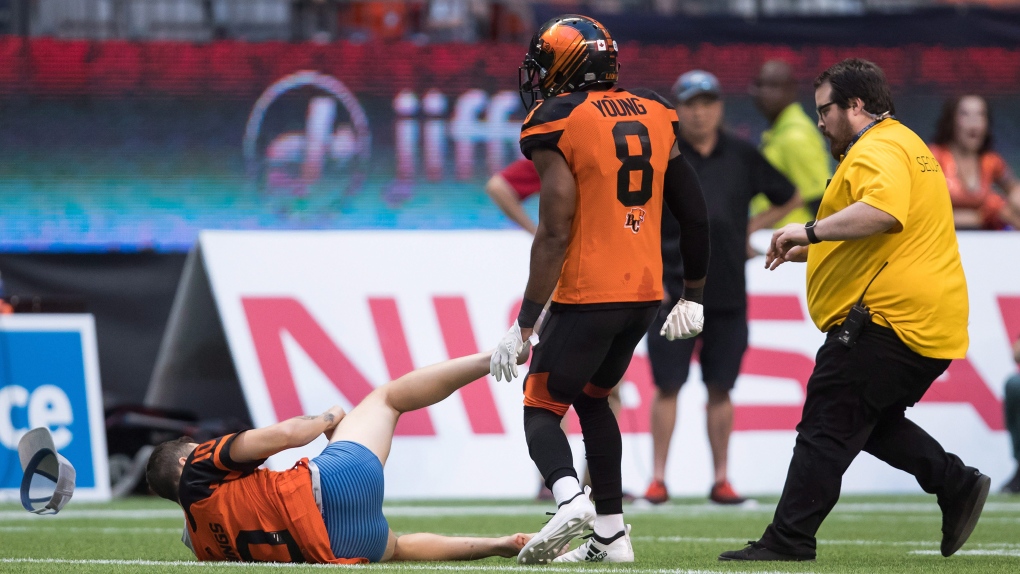 A security guard runs in after B.C. Lions' Marcell Young (8) knocked down a spectator that ran onto the field of play during the first half of a CFL football game against the Montreal Alouettes in Vancouver, on Saturday June 16, 2018. THE CANADIAN PRESS/Darryl Dyck

VANCOUVER -- A partially clothed fan who was hit by a B.C. Lions player has retained the services of a law firm.

In a statement released Wednesday, Preszler Law Firm said the fan "suffered serious injuries, including a mild traumatic brain injury, as a result of being violently struck by BC Lions player Marcell Young."

The fan was knocked down by Young, a Lions defensive back, when the man ran onto the BC Place field during a CFL game between the Lions and Montreal Alouettes on Saturday.

Police have said the man is in his 20s and from Surrey, B.C., but his identity has not been released.

Wearing an orange Lions jersey and a pair of boxer briefs, the fan made his way onto the field during a stoppage in play in the first quarter.

Two other Lions players congratulated Young following the hit with a chest bump and a high five as a security guard apprehended the fan on the ground.

The law firm declined to comment on whether a lawsuit would be filed in the case, and the man was not made available for an interview.

Prof. Joe Weiler, who teaches sports law at the University of British Columbia, said any legal action would have to overcome a number of hurdles because it appeared the fan was trespassing on the field.

"You can't have that kind of stuff happening," Weiler said. "It's family entertainment."

Whether Young, the Lions or BC Place could be sued remains speculative, he added.

Vancouver police have said the fan was issued a $115 ticket for trespassing and no criminal charges were laid.

Police originally said the fan was taken to jail overnight, but that was refuted by Preszler.

"Contrary to some news reports, our client was never arrested or taken to jail, but was released from the stadium shortly after the incident before being taken to the hospital by his family," the law firm said in a statement.

Officers at the stadium were worried about the man's safety, Sgt. Jason Robillard told reporters on Wednesday.

"They were also concerned about a high level of intoxication, a strong odour of liquor (was detected) at the time, and (they) wanted to take him to detox because he was no longer able to care for himself safely," he said.

The fan was offered an ambulance, but declined, and was released after officers escorted him out of the stadium.

Robillard said people should never run on to the field at BC Place or any other event.

"Not only is it against the Trespass Act, it's also a Criminal Code offence for mischief for interfering with other people's enjoyment who've paid for tickets to watch the event," he said.

The fan has been banned from the stadium for a year.

A spokeswoman for BC Place declined to comment on the incident, but the stadium's code of conduct says anyone disrupting a game, "including objects, or trespassing on the field," may be removed from the venue.

The Lions said they have no comment on the fan hiring a law firm.