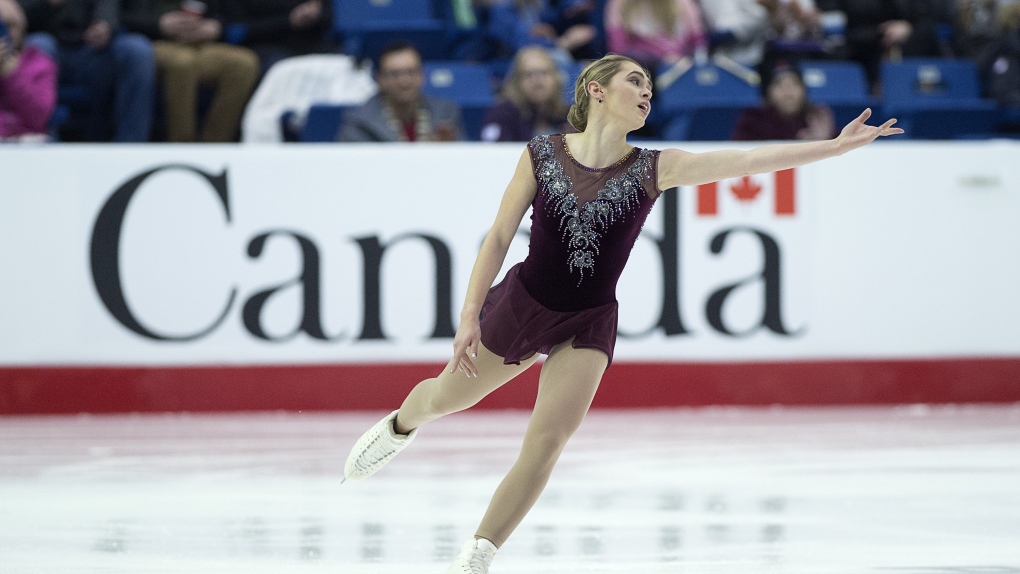 SAINT JOHN, N.B. -- When the final scores flashed on the TV monitor, Alaine Chartrand, her face stretched in a victorious grin, was lifted off her feet and spun by boyfriend Kevin Reynolds.

A few feet away, Gabrielle Daleman was being consoled by her coaches.

Happiness and heartbreak set the backdrop for the women's singles event at the Canadian figure skating championships on Saturday, as Chartrand captured gold a year after she narrowly missed making the Olympic team, while Daleman plummeted from first after the short program to fifth, in her first competition since taking a break to focus on her mental health.

"Obviously last year at this time was one of the worst days of my life, finding out I wasn't going to make the Olympic team when I was this close, so a year later, a lot of different feelings. This is why I skate, for this right now, this feeling," Chartrand said.

"Today was the redemption I was looking for. It felt really special."

The 22-year-old from Prescott, Ont., started the day in fifth place, but she loves to battle from behind. And on Saturday, dressed in a sequined burgundy dress, and skating to music from Andrew Lloyd Webber's "Sunset Boulevard," she landed six triple jumps to score 185.91 points.

Daleman, the leader after the short program, fell twice and nearly fell twice more. When her score of 166.92 came up, she buried her face in her hands and sobbed.

"It was honestly crap," she said. "That's not how I've been training it. I'm very disappointed with how today went."

Chartrand won the Canadian title in 2016, but the next two seasons were a roller-coaster of ankle injuries. She spent the Olympics on vacation in Hawaii. She tried to pretend they weren't happening. She didn't watch a minute of the coverage.

Then she upended her life, moving to Toronto and enrolling in kinesiology at York University.

"I had a really strong singular focus on skating between Sochi (2014 Games) and Pyeongchang, and I don't think that was always healthy for me, to not have other things that I could be distracted by on a hard day," she said. "This is probably the most I've enjoyed my day-to-day training.

"And I'm skating because I want to keep skating, I'm taking skating as the opportunities and privileges I've gained, and I'm trying to take advantage of that, instead of that -- 'oof!' pressure -- like 'I need to skate well and get the score.' I just want to be happy at the end of my skate."

Her boyfriend Reynolds is a two-time Olympian and a silver medallist in the team event in Sochi, who recently announced his retirement.

She helped Canada to gold in the team event at the Pyeongchang Olympics, but then had a disastrous free skate in women's singles, and was inconsolable after.

Saturday's free skate was nearly as heartbreaking. She fell twice, and nearly fell twice more, plummeting down the standings to fifth place.

Daleman didn't skate on the fall's Grand Prix circuit, announcing she needed a break to focus on her mental health. She didn't return to training until late-November.

"It's definitely a victory to be out here, and actually have the courage to put myself out here," she said. "But definitely this is going to take me a few steps back to where I was, because I was building up and building up confidence. This is going to set me back a bit, but it's a long journey ahead to get through what I went through this fall."

Daleman suffered from depression and anxiety, and has talked openly in the past about an eating disorder.

"All I will say is I have been through hell and back many many times, and it was the worst fall on my life, and I would not wish it upon my worst enemy," Daleman said.

Daleman's coach Lee Barkell said practices had been increasingly positive since Daleman returned, but that fatigue from not having a full fall of training likely played a big role Saturday.

The Canadian championships determine the team for the worlds in Saitama, Japan in March. Canada as three spots in the women's event.