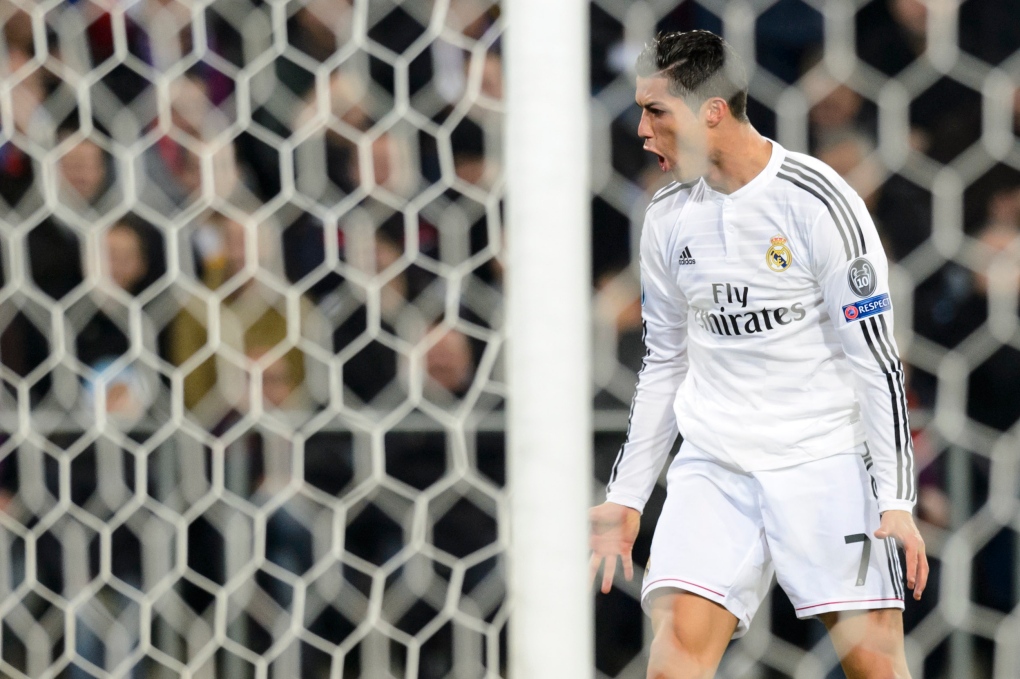 Both trail Lionel Messi by three after the Barcelona forward's record-setting hat trick on Tuesday.

Madrid's 15-match winning run started with a 5-1 rout of Basel on Sept. 16, and is the third in club history. The most recent was achieved three seasons ago under coach Jose Mourinho.

"That we have put together a run of 15 wins is a great achievement for the club," Madrid coach Carlo Ancelotti said.

Ronaldo scored in the 35th minute, tapping left-footed into an empty net from Karim Benzema's cut-back.

The FIFA player of the year's shot also grazed the post in the 77th, two minutes after Gareth Bale's shot struck the underside of the Basel crossbar.

Victory in Switzerland means defending champion Madrid wins Group B and is seeded in the last-16 draw on Dec. 19.

Basel remains second on six points, two ahead of Ludogorets Razgrad and Liverpool who drew 2-2 on Wednesday. The Swiss champion visits Liverpool in the final round in two weeks.

"We deserved more," Basel coach Paulo Sousa said. "You can see that we can compete better and better with big teams."

Gashi wasted a 56th-minute chance, slicing a shot on his weaker right foot, and worried Navas when sending a 20-meter header just high.

The Costa Rica 'keeper then scrambled back to push away Breel Embolo's shot after being rounded by the 17-year-old forward.

After Madrid's stars twice struck the frame of Basel's goal, the hosts pressed for a leveler as Liverpool led 2-1 late in the game in Bulgaria.

Play was held up in the 88th when three fans sprinted across the pitch, chased by stewards.

In stoppage time, Basel substitutes Yoichhiro Kakitani and Ahmed Hamoudi both had efforts on goal, with the Egypt midfielder curling a left-foot shot just wide.