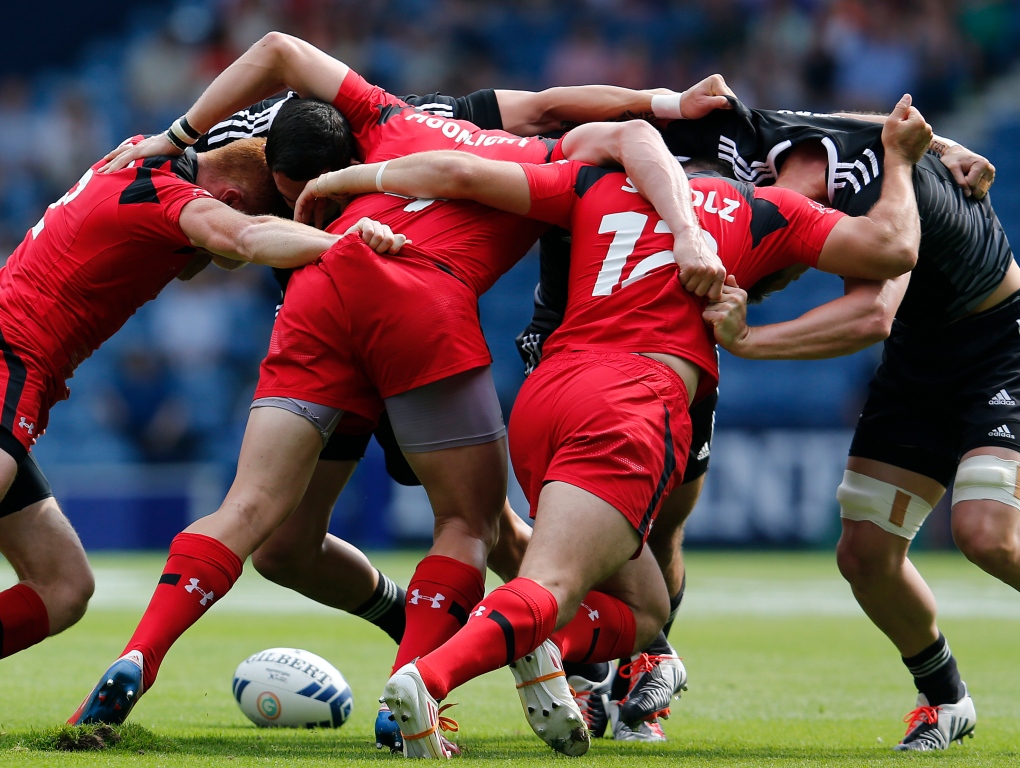 Canadian player and New Zealand players challenge for the ball during the Rugby Sevens Pool A match 1 between New Zealand and Canada during the Commonwealth Games on July 26, 2014. (AP/Frank Augstein)

GLASGOW -- Canada's rugby sevens team split its opening matches of the Commonwealth Games on Saturday to set up a must-win battle against host Scotland.

Canada ran roughshod over Barbados in a 68-5 victory to bounce back from a 39-0 loss to defending champion New Zealand earlier in the day.

"We let ourselves down big time in that first game and it was a chance for them to redeem themselves," said coach Kieran Crowley.

Nathan Hirayama, Harry Jones, Connor Braid and Justin Douglas had one try apiece, while Hirayama was good on all six conversions and Braid booted three.

The Canadians face Scotland in their final game of the day, needing a victory in front of what's sure to be a jam-packed Ibrox Stadium -- normally home to Rangers F.C. -- to be in the medal mix on Sunday.

"Home ground, 50-odd thousand people here roaring for them, so it will be massive," Crowley said.

The Canadians faced an eight-hour break between games before taking the pitch against Scotland, and weren't pleased about it.

"We went through the channels to put complaints in about it," Crowley said. "And in the end it came down to TV scheduling and things like that which is not the ideal thing as far as we're concerned.

"A couple of other teams are in the same boat as us. They're not going to change it, it is what it is, we've got to deal with it."

The Canadians, who had been at the storied stadium since shortly after 7 a.m. to begin warmup, planned to remain there all day rather than return to the athletes village. Large tents with mattresses had been assembled behind the stadium.

"We talked about it before coming to the tournament, how we're going to rest and recover," Jones said. "Brought some board games, might have a quick nap just to kill the time.

"The biggest thing is not to turn off too much, obviously we didn't show up in that first game, and that was a bit wakeup call and we can't do that again."

Board game of choice: Settlers of Catan.

The Canadians were drawn into arguably the tournament's toughest group with three of the world's core teams -- New Zealand, Scotland and themselves.

They were no match for the mighty New Zealand All-Blacks earlier in the day. The bigger and faster All-Blacks thoroughly dominated the Canadians, swatting away their tackle attempts like they were brushing away pesky flies.

"Our own defence and penalties let us down," Braid said. "We had systems in place but we fell apart when it came time. Whether it was jitters or not, we have to make sure that stuff's gone. . ."

DJ Forbes and Ben Lam scored two tries apiece, and Bryce Heem, Tim Mikkelson and Akira Ioane had one each.

New Zealand is gunning for its fifth gold medal in rugby sevens, having won the title all four times the sport has been in the Games.

Rugby sevens, which will make its Olympic debut in 2016 in Rio de Janeiro, was touted as a sure highlight of the Commonwealth Games, played before capacity crowds in the 51,000-seat storied Ibrox Stadium.

The arena was packed from the opening game -- Canada vs. New Zealand -- and during Canada's second game, the noisy crowd roared when Sean Ward scored the lone try for fledgling Barbados.

The Canadians say they're prepared for a stiff test against the Scots on Saturday night.

"We had a bit of a taste a couple of months ago, but obviously this is a little bit different, packed house here, but we've played in big stadiums against big teams before," Jones said.

"It's nothing new to the guys, obviously the Scottish fans are going to be on their home side the whole time but we'll just have to deal with that when it comes."

Canada edged Scotland earlier this season in the semifinals of the Glasgow IRB Sevens World Series stop. The Canadians made history by reaching the final for the first time, only to be trounced 54-7 by New Zealand in the final.