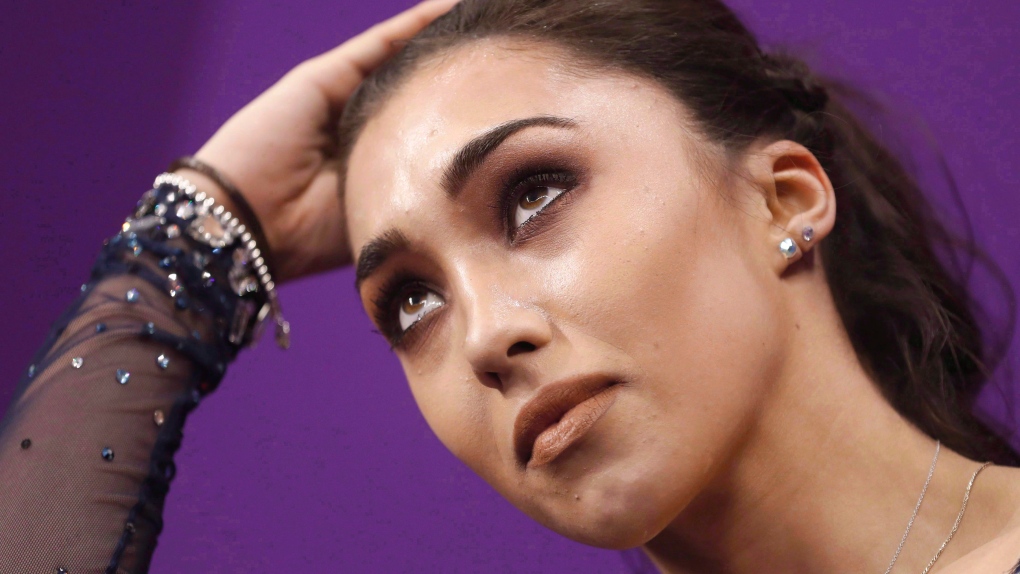 Gabrielle Daleman of Canada reacts as her scores are posted following her performance in the women's free figure skating final in the Gangneung Ice Arena at the 2018 Winter Olympics in Gangneung, South Korea, Friday, Feb. 23, 2018. THE CANADIAN PRESS/AP /Bernat Armangue

The 21-year-old from Newmarket, Ont., who has missed time the past two years while dealing with mental-health issues, was proud of her performance.

"The most important thing that I learned this season is that no matter what life throws at me I always rise at the end," she said. "That's exactly what I'm proving here. I had the worst two years of my life and to be here and get a top-12 finish means the world to me."

Daleman won the bronze medal at the 2017 worlds. She is hopeful she is on track to return to her previous form.

"I view this free skate as such a success," said Daleman. "Yes the last half wasn't the best for me. Still, I'm very excited with how I carried the program."

Meanwhile, Kaitlyn Weaver and Andrew Poje of Waterloo, Ont., were fifth after the short dance. Piper Gilles and Paul Poirier of Toronto were eighth, while Laurence Fournier Beaudry and Nikolaj Sorensen of Montreal were 10th.

"It was a magical experience out there but not perfect," said Weaver. "We had great focus."

Gilles and Poirier made adjustments to their routine for the worlds.

"The changes absolutely paid off," said Gilles. "We received higher levels on the aspects we were working on and that was an accomplishment for us."

Fournier Beaudry and Sorensen had a wardrobe malfunction when the button that holds the strap to Sorensen's pants to his skates broke.

"That's why we train," said Sorensen. "We've done this dance so many times that even with a little thing like that you may not be in the moment as much as you would like to be, but we still did a decent program so we're very happy."

Competition wraps up with the men's free skate and the free dance on Saturday.