Some gov't departments may see 10 per cent cut: Flaherty 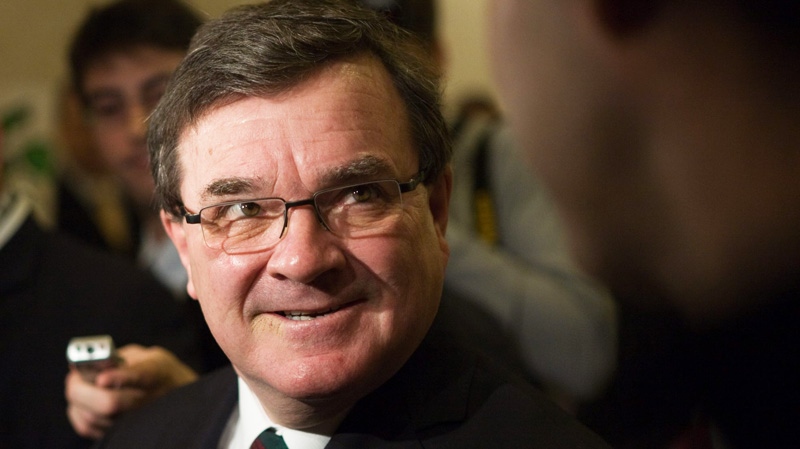 VANCOUVER - The federal government has increased spending every year for the last five years, but now Finance Minister Jim Flaherty says such spending schemes are "dangerous and risky."

Instead, Flaherty says the budgets of some departments could be cut by more than 10 per cent as the government reviews all spending in federal departments and agencies.

The minister also said issues such as pension reform and other benefits for public servants are under the microscope.

Flaherty, who was in Vancouver on Tuesday as part of his cross-Canada pre-budget consultation, told reporters he didn't believe the term austerity was apt for his government's upcoming budget.

"What we are going to have is a budget that takes us on the road to prudent results in the medium and longer term."

All government departments were asked to come up with two plans analysing cuts of five and 10 per cent, Flaherty said.

A special committee from Treasury Board has been looking over each department and agency and will come up with recommendations on what can be cut as part of the budget process.

"This is hard work," he said. "And of course, there can be numbers between five and 10 per cent and some departments can do more than 10 per cent."

The review is only for part of what the government spends, with the eye towards being "more fugal," he said, noting that equalization payments and transfer payments to provinces and individuals wouldn't be touched.

"As we prepare for budget 2012, it is clear to me that this is not the time for dangerous and risky new spending schemes that will increase deficits and raise taxes.

"We know that Canadian families are worried about their jobs and their financial security. That is why our top priority will be continuing to create jobs and growth."

In these uncertain times beyond Canada's borders, Flaherty said, the best contribution his government can make is to boost confidence and growth in Canada, while maintaining a sound fiscal position.

He also said that any full review of spending would have to include public servants.

"If one is going to make any sort of intelligent assessment of government spending in Canada, one has to look at the cost of remuneration, including benefits and pensions."

More than a dozen high-profile members of the business community met with Flaherty in Vancouver as part of his consultations.

Iain Black, CEO of the Vancouver Board of Trade, was part of the group and commended the government for reviewing its spending.

"I would suggest it's something the government should always do," he said. "I think it's very easy to avoid doing (the reviews)."

He said he urged Flaherty to think like a taxpayer, especially a small business owner, and to be ruthless in the analysis of government regulation.

Black, who's a former cabinet minister in the B.C. Liberal government, feels Canada is a safe haven because of its balance sheet and economic growth since the recession.

Greg D'Avignon, CEO of the Business Council of British Columbia, said the minister spent a lot of time listening to business leaders and took plenty of notes.

"From our perspective, we think the federal government has done an excellent job in managing the fiscal environment in Canada and is an example to the rest of the world."

He said there was great opportunity for the federal government to streamline regulation for investors, attracting jobs, capital and economic opportunities.