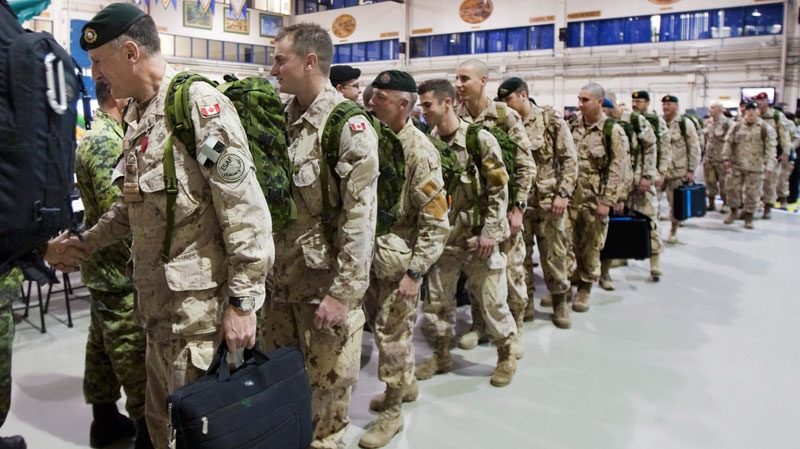 Royal 22nd Regiment soldiers line up in a drill hall as they leave for Afghanistan, Monday, November 15, 2010 at CFB Valcartier, Que. (Jacques Boissinot / THE CANADIAN PRESS)

TORONTO - The mother of a Canadian soldier in Afghanistan picketed outside Liberal MP Bob Rae's office on Saturday to urge the federal Conservative government to bring the troops home next year.

Josie Forcadilla is upset about the extension of a Canadian military presence in Afghanistan until 2014. The government announced this month that a contingent of troops will remain to train Afghan troops after the combat mission ends in July 2011.

"Whether the mission is combat or non-combat, the soldiers will still be at risk," she said, noting some of the 153 Canadian soldiers who have died in support of the Afghan mission were trainers.

The Opposition Liberals have supported the idea of Canadian soldiers remaining in Afghanistan, provided it's a non-combat role.

The group meant to bring Rae an anti-war petition with 10,000 signatures, but found his office closed.

Volunteers instead handed out postcards and encouraged passersby to write their MPs about ending the mission, rather than extending it.

"We're going to make sure he still hears from his constituents," said Sid Lacombe, co-ordinator for the Canadian Peace Alliance.

Ray Northcott, a Toronto resident, signed a postcard because he is "generally opposed to the war" and wants Canada to withdraw unconditionally from Afghanistan.

Forcadilla, whose son is scheduled to return from a six-month tour in December, says she'll continue to protest against the war as long as there are Canadian troops in Afghanistan.