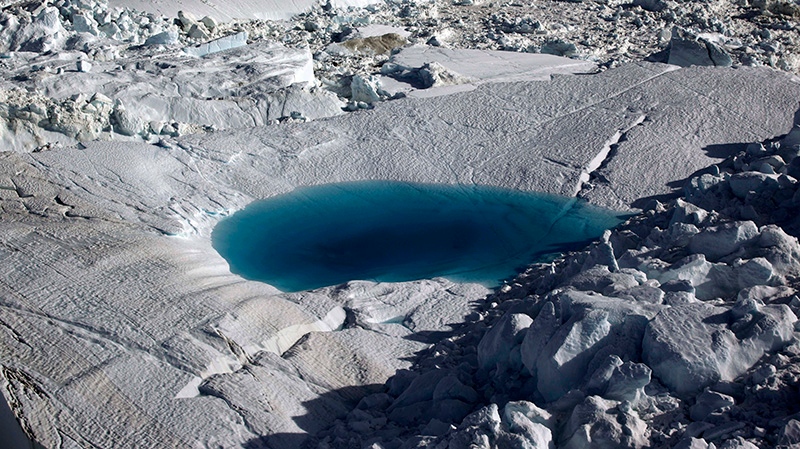 In this July 19, 2011 file photo, a large melt pool forms in the Ilulissat ice fjord below the Jakobshavn Glacier, at the fringe of the vast Greenland ice sheet. (AP / Brennan Linsley, File)

Ever wonder what an orchestra of melting icebergs sounds like? A team of U.S. professors have translated decades of data on glacial ice melt in Greenland into music and sounds in a bid to give global warming its own “voice.”

City College of New York music professor Jonathan Perl teamed up with City University of New York climate professor Marco Tedesco to create musical soundscapes or “sonifications” that document the changes in the glacial ice in Greenland over the last 54 years.

Perl told CTVNews.ca that he and Tedesco wanted to create a new way of communicating the effects of climate change at the poles.

And because people connect with sound in an entirely different fashion than they do other mediums, music was an ideal choice, he said.

“I think it’s just another way of reaching people on a more primal, emotional, intuitive level than just looking at a graph or hearing someone say ‘There’s more melting,’” Perl said.

“If you sit for two minutes 40 seconds and then end up getting caught up -- just like listening to a piece of music -- there’s a response on an entirely different level.”

Perl worked with data that measured the daily and average annual temperature, melting rate and albedo ratio. (An albedo ratio is a measurement of how reflective or white a surface is. As snow and ice melt, they become less reflective and their albedo ratios decrease.)

Working with data graphs and curves, Perl translated the data changes over time into sound.

“It’s as if I was trying to display this graph to someone who was visually impaired.”

Here is one of Perl’s sonifications tracks, highlighting changes in the albedo ratio and melting rate from 1958 to 2012.

As the albedo ratio lowers and the melt rate increases, the listener can hear lower bass frequencies and increased clicking sounds.

Perl said he wanted to create an experience similar to the Gieger Radiation counter – a detector that makes increased noise as higher levels of radiation are detected.

Perl said the melt rate records from 2012 were so extreme that he was forced to recreate all of his sonifications.

“It completely threw off the scale of the data,” he said.

To learn more about Perl’s research and hear more of his sonifications visit his website at http://www.polarseeds.org/ .