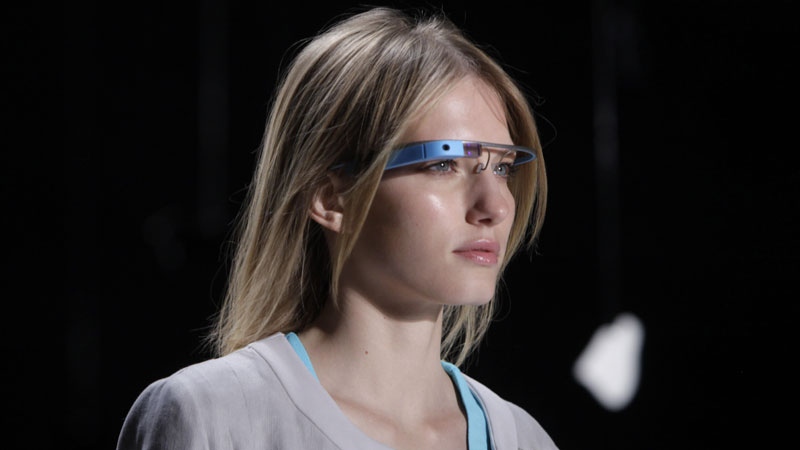 A model wearing Google Glass participates in a run through before the Diane Von Furstenberg Spring 2013 collection is modeled during Fashion Week in New York, Sunday, Sept. 9, 2012. (AP Photo/Seth Wenig)

MONTREAL -- Using wearable computing devices like smart watches and smart glasses will appeal to consumers as an alternative to pulling out their smartphones, say technology experts.

You will be able to respond to text messages or emails and make phone calls without reaching for your phone, said Info-Tech Research Group's Mark Tauschek.

"If you've got a smart watch on your wrist or you're wearing Google Glass, you're going to get those notifications on your wrist or in your eye so you don't have to reach into your holster or pocket or purse or whatever to grab your smartphone," Tauschek said.

Smart watches such as Pebble, I'm Watch and Martian use Bluetooth technology to pair with smartphones, and do some of their work.

It won't replace the smartphone entirely, but there won't be the distraction of "feeling that vibration in your pocket or on your hip," Tauschek said.

Smart watches that cost between $100 and $200 should have mass appeal and take off within two to five years, predicted Tauschek, lead research analyst at Info-Tech in London, Ont.

"All you really need to get is one really useful, easy to use attractive wearable smart watch and others will follow and it will find a mass market pretty quickly."

There's also Google Glass, expected on the mass market late this year or early next year. The glasses respond to voice commands instead of fingers touching a display screen and they're equipped with a camera and tiny display screen attached to a rim above the right eye. At this point, the cost is US$1,500 but analysts expect the price to come down for mass consumer use.

Tech trends firm ABI Research said wearable computing devices are expected to "explode" over the next year and could become the norm within a matter of years.

"In three or four years, we're definitely going to see in terms of a smart watch where it's probably got the same capability of a high-end feature phone and maybe even a low-end smartphone," said ABI senior research analyst Josh Flood, who's based in the United Kingdom.

ABI is forecasting the wearable computing device market will grow to 485 million annual device shipments by 2018.

Other wearable computing devices include smart clothing with a heart rate tracker embedded in the fabric, Flood said from London.

"This enables people just to put on a simple T-shirt rather than having to worry about straps and putting on a heart rate monitor around the top of the chest."

In the health-care field, wearable computing technology also can be used for pain management. There's a cooling strap that people can wear on their knees, elbows, shoulders or back which controls temperature, he said.

ABI has estimated that 61 per cent of the wearable technologies market this year will come from sport and activity trackers.