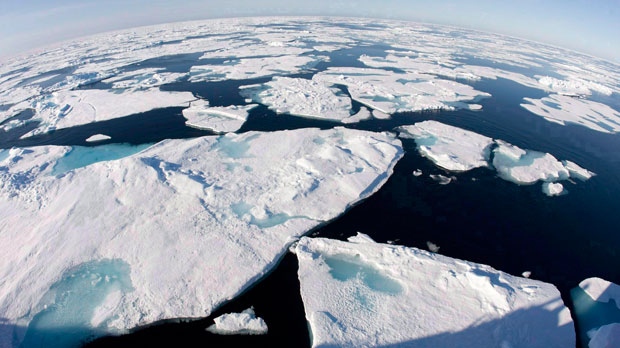 GATINEAU, Que. - Federal Environment Minister Catherine McKenna says the key to dealing with climate change in the Arctic is to have "real conversations" with the Inuit peoples who live there.

But Sally Jewell, the U.S. secretary of the interior, has a much blunter assessment, arguing climate impacts are already underway, can't be turned around and that moving some Arctic communities may be the only solution.

"We will have climate refugees," Jewell said Thursday after meeting McKenna at the Museum of History across the Ottawa River from Parliament Hill.

National parks, migratory species, climate change and Arctic adaptation - and an urban hike in the spring sunshine - were on their agenda.

They also met Natan Obed, the president of Inuit Tapiriit Kanatami, who has become a go-to sounding board for the new Liberal government on the matter of climate adaptation and mitigation in the Far North.

McKenna, not quite six months into her job leading the environment ministry in the climate-focused Trudeau government, was her usual cautious self in describing the daunting challenges of climate change in the fast-warming Arctic. She stressed the importance of co-operation and dialogue when asked to name the single most important measure government can take to address climate change in the region.

Jewell, who has only months left in her post before the Obama administration is replaced, was far less circumspect.

"We need to provide support for adaptation and build communities that are resilient in the face of what's happening in the Arctic," the secretary said flatly. "You're not going to be able to turn this around."

"We can stem the increase in temperature, we can stem some of the effects, perhaps, if we act on climate as we are committed to do through the Paris accords. But the changes are underway and they are very rapid. We will have climate refugees."

On average, Canada has warmed more than 1.3 degrees Celsius since 1948, according to Environment Canada. Parts of the Arctic have warmed at more than twice that rate.

The impact has been little short of disastrous. Melting permafrost is affecting the integrity of buildings and roads. Storms are clawing away shorelines in the absence of stabilizing sea ice. Natural habitat is changing animal behaviour and affecting the ability to hunt "country food." Travel on frozen lakes and sea - the highways of the North - has become perilous.

Jewell said she's visited villages in Alaska whose existence is threatened by erosion.

There has been talk for years that Tuktoyaktuk on the Arctic Ocean in the Northwest Territories may have to relocate eventually.

"We have to figure out how to deal with potentially relocating villages, or supporting communities in their adaptation and in building resilience within those communities to a changed reality," she said.

Even the suggestion of moving indigenous communities has recently sparked acrimonious debate in Canada.

But that wasn't the only controversy Jewell was prepared to tackle Thursday.

Asked about ongoing court challenges in the United States over allegations of climate-science suppression and denial by Exxon Mobil Corp., McKenna said it's time to move forward.

"Look, we all know that climate change is real. ... It's not just industry that have had challenges understanding that."

Jewell, however, waded in with her fists up.

"There is nothing like a company's reputation," she said.

"It takes years to build and can be stripped down in a hurry and if a company is irresponsible in sharing misinformation, they need to be held to account."