For four generations, Anne Kienitz and her family have travelled south to Venice, Fla. to escape the Canadian winters.

But over the past decade, the snowbird says the once beautiful turquoise beaches have gotten progressively ugly, and lately, they’ve never been worse – thanks to a large toxic algae bloom responsible for the death of thousands of marine animals.

“There was this sort of murky, greenish brown substance in the water and then all of a sudden the fish started coming on the shore, dying,” Kienitz, who lives outside the Greater Toronto Area, told CTVNews.ca in a phone interview. “And then you could smell it, this really strong smell that makes you cough and hurts your eyes.”

An expert says what Kienitz is referring to is a mix of decaying animals and airborne toxins from an accumulation of toxic, plant-like algae called Karenia Brevis, collectively known as the red tide.

Heather Barron, research director and head veterinarian at Florida’s Clinic for the Rehabilitation of Wildlife, says Karenia Brevis is an algae naturally found in the water.

“It is what is known as a harmful algae bloom,” Barron said.

“It is a natural phenomenon but certainly being made much worse, predominately due to agricultural runoff from the fertilizers we use.”

Over time, the natural wetlands in Florida that absorb and filter runoff water from rain have been flattened due to agricultural developments, Barron said. This leads to an excessive flow of nutrient-filled water into the beaches, known as nutrient pollution.

“All the pesticides, fertilizers and everything they use on crops has been running into our water for decades,” Barron said. “Algae is a plant, so it also grows in response to an increase in nitrogen and phosphorus.”

“We currently have cell counts anywhere from 10 to 20 million cells per litre,” Barron said.

Richard Bartleson, a biologist at Sanibel-Captiva Conservation Foundation, has been tracking red tide blooms in Florida for the past 12 years. He says this is the worst case he’s seen in the last decade.

“We used to sometimes get a patch of red tide come by and it (would) be gone in a week,” Bartleson told CTVNews.ca.

Bartleson says the algae bloom now stretches over 150 miles (over 240 kilometres) — which is about the distance from Tampa Bay to Naples.

The University of Florida says that in the last 200 years, the U.S. has lost more than 53 per cent of its wetland acreage.

Moreover, Florida alone has lost more than 9.3 million acres of wetlands in the last 200 years (37,635 square kilometers), the most lost in any state.

“With the high loading rates of nutrients from the shore, it’s impossible to stop it from running out (of nutrients),” Bartleson said.

Currently, the biggest concern is the beaches’ natural habitat.

According to Barron, before the outbreak, Florida’s Clinic for the Rehabilitation of Wildlife treated an average of 200 animals per year for red tide poisoning. However, since the outbreak in October, they have treated more than 500 animals. 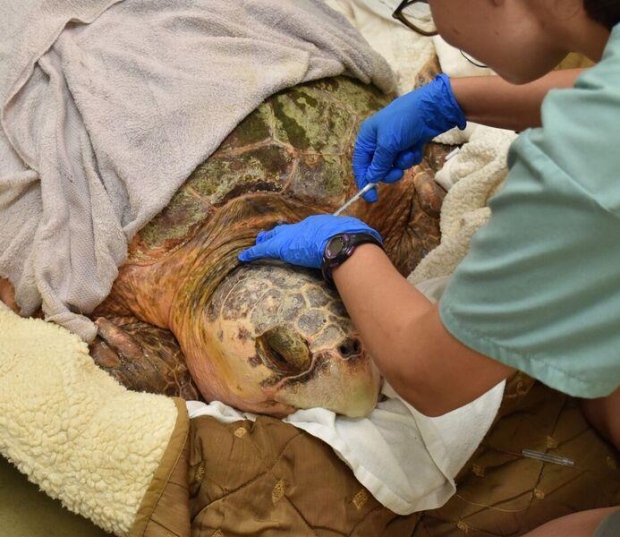 Barron estimates millions of small and large sea creatures across the state have died since, with tons more dying every day.

As the crisis worsens, media personality and environmental activist Erin Brockovich has spoken out.

In a strongly worded post on Facebook last month, Brockovich called on “all” elected representatives in Florida to “do your damn job,” and find a solution.


On Monday morning, Florida Governor Rick Scott issued an executive order declaring a state of emergency in Florida, for the seven counties the red tide has spread to.

While airborne red tide toxins are not lethal to humans, experts advise people to stay away from red tide-infested waters.

Research conducted at Florida’s Clinic for the Rehabilitation of Wildlife suggests there are severe long- term effects with chronic exposure.

“The problem is, we don’t know what the long-term effects are. There have been some tentative links with neuromuscular disease, Parkinson’s and even Alzheimer’s.”

Kienitz, meanwhile, tells CTVNews.ca she isn’t taking any chances. For her, Florida simply just isn’t the relaxing escape it used to be.

“In the past 10 years I think it has gotten a little bit worst every time,” Kienitz said.

“A part of the beauty of being in Florida is the miles upon miles of beautiful beaches… Now you can’t walk on the beach. You are there for maybe two minutes, and depending on how far you are, you can sometimes even smell it in the parking lot. And you just have to go away.”