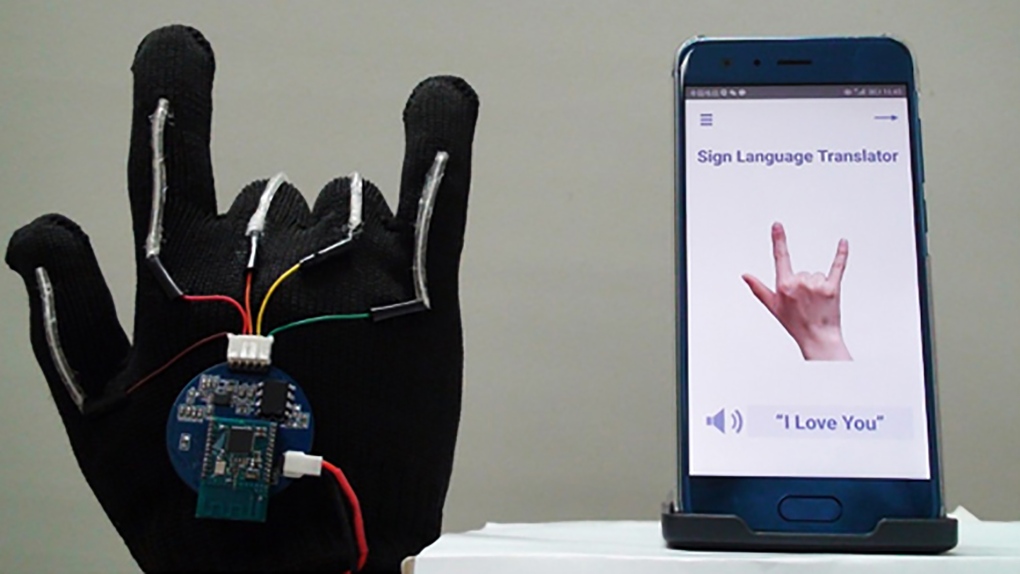 A glove that translates sign language into speech in real time has been developed by scientists -- potentially allowing deaf people to communicate directly with anyone, without the need for a translator. (Via CNN/UCLA)

A glove that translates sign language into speech in real time has been developed by scientists -- potentially allowing deaf people to communicate directly with anyone, without the need for a translator.

The wearable device contains sensors that run along the four fingers and thumb to identify each word, phrase or letter as it is made in American Sign Language.

Those signals are then sent wirelessly to a smartphone, which translates them into spoken words at a rate of one word per second.

Scientists at UCLA, where the project was developed, believe the innovation could allow for easier communication for deaf people. "Our hope is that this opens up an easy way for people who use sign language to communicate directly with non-signers without needing someone else to translate for them," said lead researcher Jun Chen.

"In addition, we hope it can help more people learn sign language themselves," he added. The research was published in the journal Nature Electronics.

Between 100,000 and 1 million people are estimated to use American Sign Language in the United States.

The glove does not translate British Sign Language, the other dominant sign language in the English-speaking world, which is used by about 151,000 adults in the UK, according to the British Deaf Association. More than 300 sign languages are used by more than 70 million deaf people across the world.

The researchers also added adhesive sensors to the faces of people used to test the device -- between their eyebrows and on one side of their mouths -- to capture facial expressions that are a part of American Sign Language.

But the innovation was criticized by some within the deaf community, who argued it was unnecessary and did not address the concerns of signers.

"The tech is redundant because deaf signers already make extensive use of text-to-speech or text translation software on their phones, or simply write with pen and paper, or even gesture clearly," said Gabrielle Hodge, a deaf post-doctoral researcher from the Deafness Cognition and Language Research Centre (DCAL) at University College London. "There is nothing wrong with these forms of communication."

"It would be so much easier if tech focused on user-driven and user-centered design in the first instance, rather than dreaming up 'solutions' they think will fix all the problems in the world."

"What inventions like signing gloves totally ignore is the fact that deaf people are the ones living these daily lives in the hearing communities the inventors try to serve," added Julie A. Hochgesang, an associate professor in the Department of Linguistics at Gallaudet University in the US, who uses ASL.

"Deaf communities are heterogeneous in how people identify themselves. Inventions like signing gloves pigeonhole deaf people and put the communication burden on deaf people," she added.